When word started to spread that there was a very special war veteran being rehabilitated at St. Catherine of Siena Nursing and Rehabilitation Care Center—94 year old, Lorenzo DuFau was more than proud to share ... 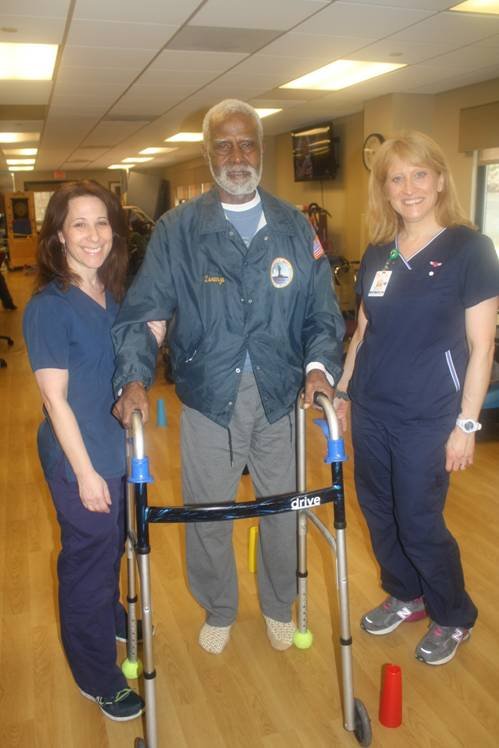 Smithtown, NY - April 2, 2014 - When word started to spread that there was a very special war veteran being rehabilitated at   St. Catherine of Siena Nursing and Rehabilitation Care Center—94 year old, Lorenzo DuFau was more than proud to share his story with the many caregivers, staff and residents at the facility.

Mr. DuFau is a surviving veteran of the USS Mason (DE-529) warship commissioned in  March 1944 during World War II—the very first vessel to ever deploy a majority crew of 120 African American naval officers out of a 160 member crew. The USS Mason marked a turning point in American history, as African-Americans were offered the opportunity to enlist as officers and not stewards for the first time ever. “This was our chance, all 120 of us, to prove that we were worthy to be treated like Americans, despite the color of our skin,” said Mr. DuFau, when recalling his experience upon learning he was selected to participate in the mission.

During a time when America was a segregated and unequal environment for African Americans, Mr. DuFau and his peers realized the magnitude and many risks they were embarking upon by voluntarily joining the USS Mason crew—many of them leaving behind their wives and children, with no guarantee of support. Mr. DuFau was selected to serve an a signalman after passing several preliminary exams and completing schooling—and despite the sacrifices he had to make, he knew he had to stand firm in what he believed was right—which was to prove that all men should be treated equally.  “I wanted to serve,” he recalled. “A man always protects his home and country.”

Mr. DuFau’s story is one that has not only touched the many hearts at the nursing and rehabilitation care center in Smithtown, but has been shared in a book written by Mary Pat Kelly, “Proudly We Served”,  which was later produced into a film in 2004, so profoundly entitled “Proud”.  The book and film both share the story of Mr. DuFau, the crew and the USS Mason and the success of their voyages to and from Ireland, delivering supplies to allies during World War II. Thanks to writer Mary Pat Kelly, the story of the USS Mason has not been forgotten—and the bravery of Mr. DuFau and his peers now lives on to teach and encourage future generations to stand for what they believe in. “To realize I am a part of this—a part of such important American history—and to know that our story was not lost—I am so proud,” said Mr. DuFau. In 1994, 50 years after it was recommended, President Bill Clinton awarded the crew of the USS Mason a much deserved commendation. Additionally, Mr. DuFau’s original uniform is scheduled to be on display at the Smithsonian National Museum of African American History and Culture in Washington DC, which is slated to be opened in 2015.