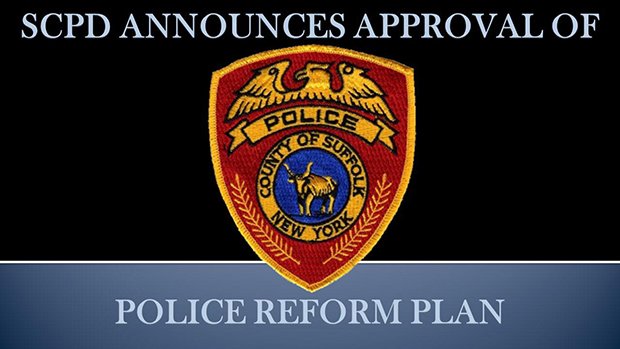 The SCPD announced the news in a statement on its official Facebook page.

“Commissioner Geraldine Hart is pleased to announce the Suffolk County Legislature has approved the department’s police reform plan that will bring increased transparency and accountability to the police department and significantly changes the culture of policing in the county,” the post said.

The plan, according to the statement, provides for expanded use of police body cameras, collection and public availability of traffic and pedestrian stop data, assigning mental health experts to respond to some 911 calls and allowing for the Suffolk Human Rights Commission to oversee complaints about police misconduct and bias.

“The department’s implicit bias training is already  nationally recognized and we believe as we develop and implement new practices those too will become national models,” said the SCPD. “As we move forward with our reforms, we will continue  our dialogue with our community partners and modify where necessary.”

“What we have accomplished with this plan, with community member input, is additional reform that is innovative and increases accountability, efficiency, public safety and community trust,” she said. “I believe this is the next step to a more fair and equitable department.”

Click here to learn more about the reform plan.