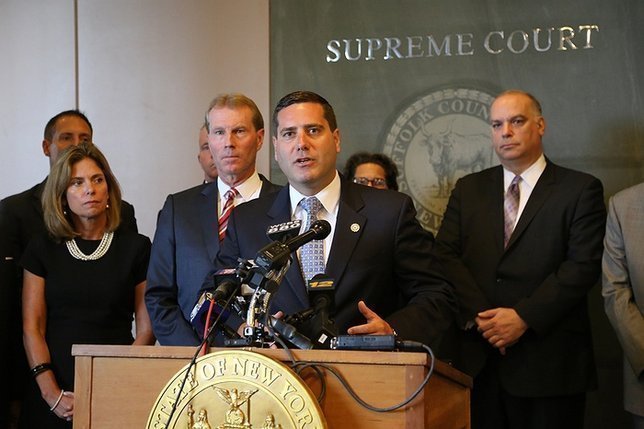 Riverhead, NY - April 3, 2019 - Suffolk County District Attorney Timothy D. Sini and Suffolk County Police Commissioner Geraldine Hart today announced the indictment of an MS-13 gang member for the alleged murder of 18-year-old Estiven Abrego-Gomez, of Greenlawn, in August 2016.
Elmer Gilberto Santos Contreras, 23, is charged with Murder in the Second Degree, an A felony. Contreras is a citizen of El Salvador whose last known address in New York was in Roosevelt. He is a self-admitted member of the MS-13 gang.
“The victim’s body was found in a park where many members of the Greenlawn community played, relaxed, and congregated, so this incident hit the Greenlawn community very hard,” District Attorney Sini said. “It is with great pleasure that law enforcement is able to announce today that we have solved this murder and those individuals who are responsible will be held accountable.”
“For the past two and a half years, the Suffolk County Police Department’s homicide detectives have relentlessly focused on finding justice for Estiven Abrego-Gomez and to hopefully provide some closure to his family,” Commissioner Hart said. “We hope this apprehension brings peace for family, friends and members of the community who have been mourning the loss of this teen. It is our hope that all gang members realize we will not ever give up on any of our unsolved cases and we will continue to persist in our efforts to end gang violence.”
At approximately 7:11 a.m. on Aug. 20, 2016, a man was walking near Greenlawn Park at the intersection of Pulaski Road and Broadway when he discovered Abrego-Gomez’s body. The victim was found with significant lacerations on his body.
“The injuries in this case are extreme and are very typical of MS-13 violence,” District Attorney Sini said. “In this case, the victim’s hands were nearly severed.”
The man flagged down a passing motorist who called 911 and Suffolk County Police officers from the Second Precinct responded.
The Suffolk County Medical Examiner’s Office determined Abrego-Gomez’s cause of death to be sharp force injuries and blunt force trauma.
An extensive investigation by the Suffolk County Police Department’s Homicide Squad and the Suffolk County District Attorney’s Office’s Homicide Bureau revealed evidence that Contreras allegedly ordered Abrego-Gomez’s murder after the victim was reportedly seen on social media flashing gang signs associated with the 18th Street gang, which is a rival gang of MS-13.
“The motive here is one that we’ve seen numerous times, particularly by MS-13, where gang members use violence to retaliate against rival gang members,” District Attorney Sini said.
Contreras, who was being held in U.S. Immigration and Customs Enforcement (“ICE”) custody in Virginia awaiting deportation proceedings, was brought back to Suffolk County on March 28 by Suffolk County Police Homicide Squad detectives to face prosecution on the indictment.
He was arraigned on the indictment today by Suffolk County Supreme Court Justice Philip Goglas and was remanded without bail.
If convicted, Contreras faces a maximum sentence of 25 years to life in prison.
The indictment also charges Anthony Gutierrez-Meza, 23, with Murder in the Second Degree for allegedly acting in concert with Contreras to commit the murder. Gutierrez-Meza’s last known address in New York was in Valley Stream. He is currently in police custody in Virginia and will be arraigned on the indictment at a later date.
This case is being prosecuted by the Homicide Bureau.
A criminal charge is an accusation. A defendant is presumed innocent until and unless proven guilty.