Nahriek Belford, 17, has been identified as a member of the Bloods street gang, Sini says. 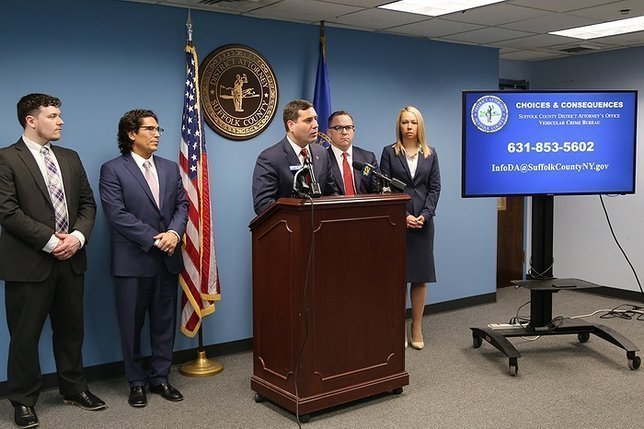 Riverhead, NY - April 2, 2019 - Suffolk County District Attorney Timothy D. Sini today announced the indictment of a Bellport man for allegedly causing the death of three individuals and seriously injuring another in a motor vehicle crash in Middle Island on Feb. 9.
“It’s clear that this defendant had no intent of stopping for law enforcement,” District Attorney Sini said. “Three people are now dead because of the actions of this defendant.”
Nahriek Belford, 17, is charged with four counts of Assault in the First Degree, a B violent felony; three counts of Manslaughter in the Second Degree, a C felony; Assault in the Second Degree, a D violent felony; three counts of Unlawful Fleeing of a Police Officer in the First Degree, a D felony; Criminal Possession of Stolen Property in the Third Degree, a D felony; Criminal Possession of Stolen Property in the Fourth Degree, an E felony; Reckless Endangerment in the Second Degree, an A misdemeanor; Unauthorized Use of a Motor Vehicle in the Third Degree, an A misdemeanor; Reckless Driving, an unclassified misdemeanor; and several traffic violations.
Belford has been identified by law enforcement as a member of the Natural Born Killers (“NBK”) set of the Bloods street gang.
At approximately 11:45 p.m. on Feb. 9, Belford, while driving a 2015 Nissan Rogue that had been reported stolen two days prior, was observed by a Suffolk County Police officer allegedly failing to stop at a stop sign at the intersection of Yaphank Avenue and Main Street in Yaphank. The officer attempted to initiate a traffic stop.
Belford allegedly fled from the police officer at a high rate of speed, driving through several red lights, crossing over double yellow lines into oncoming traffic and making illegal U-turns.
At approximately 11:50 p.m., as Belford was traveling westbound on Middle Country Road/Route 25 in Middle Island, he allegedly struck a 2009 Honda CRV that was attempting to make a left turn onto Birchwood Park Drive. Belford was allegedly driving at a speed of 106 mph immediately prior to the crash. The force of the impact caused the Honda to be cut in half.
The passengers in the Honda, Jerome Weingarten, 74, and his wife, Randee Weingarten, 71, of Middle Island, were both pronounced dead at the scene by a physician assistant from the Office of the Suffolk County Medical Examiner. Belford’s brother, Angelo Belford, 19, of Bellport, who was a passenger in the Nissan, was also pronounced dead at the scene.
Jaquell Funderburke, 16, who was a passenger in the Nissan, suffered serious physical injuries as a result of the crash.
Belford was arraigned on the indictment today by Suffolk County Supreme Court Justice Fernando Camacho. Bail was set at $250,000 cash or $500,000 bond.
If convicted of the top count, Belford faces a maximum determinate sentence of 25 years in prison.
This case is being prosecuted by Jacob Delauter, of the Vehicular Crime Bureau.
A criminal charge is an accusation. A defendant is presumed innocent until and unless proven guilty.