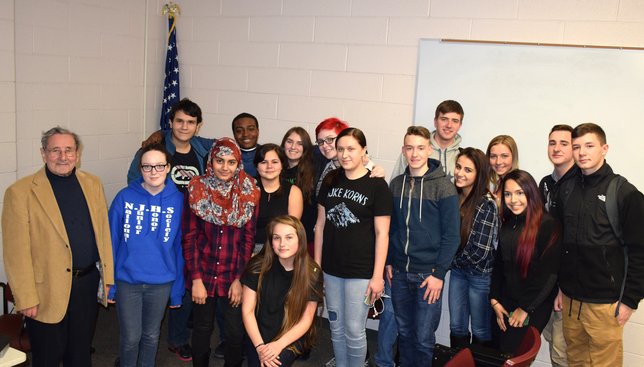 During this powerful and emotional talk to more than 200 students some of whom were in tears, Mr. Reich showed a PowerPoint of still photographs and quotes which recounted the history of the Holocaust, his experiences at the death camps between 1943-45 and how those experiences changed him forever. He was ultimately liberated by Allied Forces on May 5, 1945, just two days before Germany’s surrender.

Mr. Reich, whose arm stills bears a fading tattoo – Nazi identification number A-1828 – conducts these presentations to deliver messages to young people that if they see bullying of any form that they should not be bystanders and be one of the “J.U.S.T. – those who Judge a situation, Understand the problem, Solve that problem and Take action.” He correlated some of the Nazi’s tactics to those that bullies use today, such as writing and posting letters anonymously.

“I believe Werner’s presentation sends a message that encourages students to be pro-active and treat others with kindness and respect,” said Kerri Coudrey, a William Floyd High School social studies teacher, who has invited Mr. Reich to deliver his message to William Floyd students for the past 15 years.