Take the Train to the Games at Citi Field for April 8 Home Opener and All Season Long. 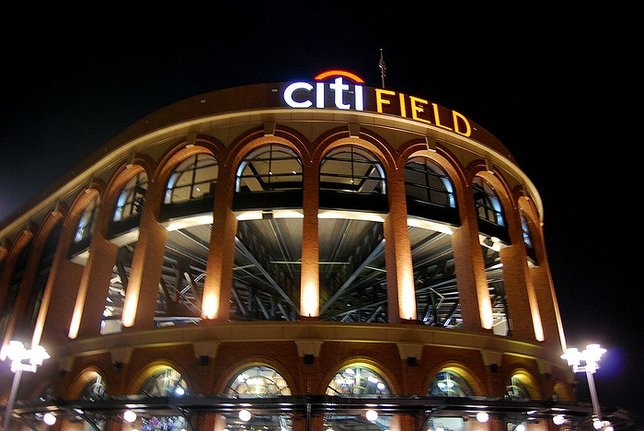 Citifield lit up on a clear Spring evening.

Photo by: Sam Smith, via WikiCommons.

Queens, NY - March 31st, 2016 - Our National League champion New York Mets return to Citi Field on Friday, April 8 to play their 2016 home opener against the Philadelphia Phillies and MTA Long Island Rail Road is once again providing special train service to Mets-Willets Point Station and the ballpark.
Take the LIRR for direct service to Citi Field from Penn Station, Woodside, and all stations on the Port Washington Branch with trains stopping at Mets-Willets Point every 30 minutes before, during and after games.
With pitching ace Matt Harvey leading a starting rotation that boasts Jacob deGrom, Noah Syndergaard, Steven Matz and Bartolo Colon, and hard-hitting Yeonis Cespedes anchoring the lineup, ya gotta believe the Mets will get off to fast start in 2016.
Almost as fast as LIRR service to Mets-Willets Point. From Penn Station, it’s a quick 19 minutes to the ballpark. From Port Washington, it’s just 27 minutes. Fans traveling on other branches of the Railroad can reach Citi Field by changing at Woodside for a Port Washington-bound train and a five minute the ride to the ballpark.
Remember that Mets-Willets Point is a gated station, which means instead of punching tickets on the train, LIRR conductors will be at the station collecting train tickets from customers as they exit the train. Except for weeknight trains from Penn Station, all trains to baseball games accept off-peak tickets.
On weekends, fans coming from Penn Station, Woodside, Auburndale, Bayside, Broadway, Douglaston, Flushing-Main Street, Little Neck, or Murray Hill can save money by using CityTicket, which is just $4 one way. CityTicket cannot be purchased on board a train, and is valid only on the day purchased.
Fans traveling from branches other than the Port Washington Branch, who change at Woodside, will not need a separate ticket for that leg of the journey. Since Mets-Willets Point is located in Zone 1, tickets to Woodside or Penn Station are valid to Mets-Willets Point as well.

However, passengers must retain their ticket stubs and inform ticket collectors of their intention to travel to Mets-Willets Point Stadium. Customers must hold onto their tickets, which will be collected at Mets-Willets Point after they disembark.
The railroad’s special Family Fare is a great way for future big leaguers to see their favorite team. Children ages 5 through 11 can ride for only $1 each (in each direction) when Family Fare tickets are purchased at a ticket office or from a ticket machine, during off-peak hours, when accompanied by an adult paying the regular off-peak fare.

Parents with monthly or weekly tickets just pay for the children. Up to four children can travel with each parent (or guardian, 18 or older) at this special rate. Children under 5 ride for free at all times.
Take the LIRR to Yankee Stadium
And just a word for Long Islanders who happen to be Yankee fans. The LIRR can help you get to Yankee Stadium too. Take the LIRR to Penn Station, then walk one block east to the 34 St. Herald Square subway station and take the B train or D train to 161 St. - Yankee Stadium.

You can also take the LIRR to Woodside Station and change their for the Manhattan-bound No. 7 train to 42nd St. -Grand Central Station and grab the uptown No. 4 train 161th St.- Yankee Stadium or take Metro-North to the Yankees-East 153rd St. Station.
For More Information
Mets-Willets Point Station timetables are available here. Printed timetables are available at LIRR ticket offices and terminals. Fans can also contact the LIRR's Travel Information Center by calling 511 from any phone in New York State.

If you are deaf or hard of hearing, use your preferred relay service provider or the free 711 relay to reach LIRR at 718-217-5477. Customers can also consult the LIRR’s website at www.mta.info, and can follow follow @LIRRTrain2Game on Twitter for all events at Citi Field.