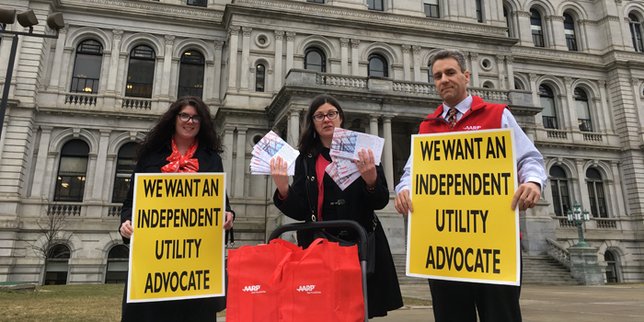 Albany, NY – March 30, 2017 - As state budget negotiations enter the homestretch, AARP today delivered more than 3,500 petitions from New Yorkers to Senate Majority Leader John Flanagan and other state leaders urging the establishment of an independent utility consumer advocate to fight for overburdened residential customers.
AARP also delivered the petitions to Governor Andrew Cuomo, Senate Independent Democratic Conference Leader and Coalition Co-Leader Jeff Klein and Assembly Speaker Carl Heastie at the State Capitol as they and Senator Flanagan negotiate the budget for the fiscal year that begins Saturday.
“We need an independent advocate who could stand toe to toe with the utility industry and go to the courts to fight unfair rate hikes; that would save consumers real money,” said AARP New York State Director Beth Finkel. “Thousands of our members are telling state leaders that it’s time to act.”
Long Islanders regularly pay among the highest residential electric bills in the nation, yet New York remains the largest of just 10 states without an independent utility consumer advocate to push back when utility companies spend over $10 million a year in ratepayers’ own money to push for rate increases.
AARP surveys consistently show high utility bills put a strain on the finances of Long Island’s Generation Xers and Baby Boomers. The need for a strong, independent advocate is particularly high for retirees and those on fixed incomes who must devote a higher portion of their income than younger New Yorkers to this basic life necessity.
The Assembly included funding for an independent utility consumer advocate office in its one-house budget proposal earlier this month. Neither the Senate nor the Governor included an advocate in their budget proposals.
Follow us on Twitter: @AARPNY and Facebook: AARP New York
AARP is the nation’s largest nonprofit, nonpartisan organization dedicated to empowering Americans 50 and older to choose how they live as they age. With nearly 38 million members and offices in every state, the District of Columbia, Puerto Rico, and the U.S. Virgin Islands, AARP works to strengthen communities and advocate for what matters most to families with a focus on health security, financial stability and personal fulfillment. AARP also works for individuals in the marketplace by sparking new solutions and allowing carefully chosen, high-quality products and services to carry the AARP name.  As a trusted source for news and information, AARP produces the world’s largest circulation publications, AARP The Magazine and AARP Bulletin. To learn more, visit www.aarp.org or follow @AARP and @AARPadvocates on social media.