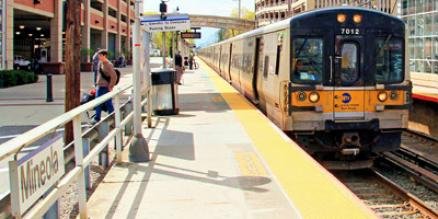 The addition of the third track will increase capacity while allowing trains to pass disabled equipment and avoid track and signal problems, thus greatly improving service reliability along this heavily traveled corridor. It will also allow for reverse-peak service and greater intra-Island travel, and support planned service growth in future years as the LIRR begins service to Grand Central Terminal.

The contract is being awarded by the Long Island Rail Road to a joint venture of Gannett Fleming and AECOM - firms that have vast experience in conducting in-depth and accelerated reviews. The joint venture was selected by the LIRR to conduct public outreach, environmental review and preliminary engineering. The contract is valued at $6.95 million.

"This is an important step forward in this project, which is so critical to the future of Long Island residents and the region's economy," Governor Cuomo said. "Earlier this year, I promised that we would engage with the community at an unprecedented level and use the environmental review process to mitigate adverse impacts on the local communities in every way possible. This project will not only improve commutes but also reduce traffic congestion and strengthen the environment by getting more Long Islanders out of their cars."

The contract announced today calls for the development of initial conceptual engineering designs within the existing right-of-way between Floral Park and Hicksville where a third track will be constructed and can be extended to cover preparation of design-build contracts and additional support during the project’s construction. The review will also identify community benefits from the project and ways to mitigate adverse impacts during construction.

Governor Cuomo has already announced that construction of the third track right-of-way will not require any acquisition of residential properties.

The LIRR Main Line Expansion project will greatly benefit the local communities by modifying all seven street-level railroad crossings in the project's corridor. The project team will work with local communities to determine the best possible outcome for each crossing. The seven crossings are:

Modifying these crossings will increase safety for motorists, pedestrians and rail commuters; eliminate traffic congestion on local streets from crossing gates, and sharply reduce noise from bells and train horns.

The environmental review process will also include an extensive public outreach program that will far exceed statutory requirements. This effort will encompass public meetings, a project office within the affected corridor and frequent meetings and other communications with local elected officials and community stakeholders. Outreach is being modeled on the highly successful process used on the New NY Bridge project, in which the environmental review was expedited to happen concurrently with the project team conducting more than 100 community meetings.

The LIRR and the Gannett Fleming/AECOM team will hold public hearings, accept formal public comment, and issue an environmental impact statement about the project.