Rita Cosby, special correspondent for CBS' Inside Edition and media veteran, was the keynote speaker of the 2017 Folio Awards.

Glen Head, NY – March 30, 2017 - On March 28, the New York Institute of Technology’s de Seversky Mansion – the Glen Head estate that was home to businessman, inventor and philanthropist Alfred I. du Pont – was host to the Fair Media Council’s 2017 Folio Awards, an annual luncheon whose purpose is to salute the very best in local Long Island media and reporting. 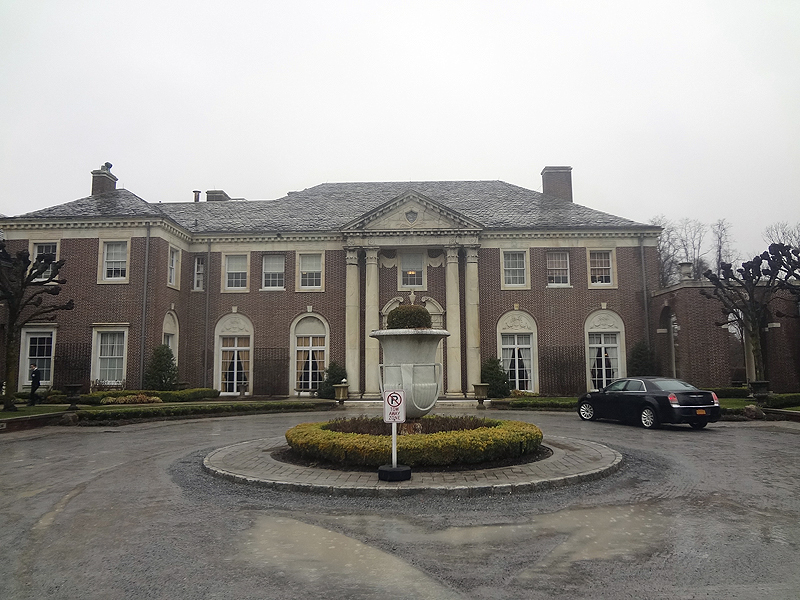 Merrick resident and American Idol Season 10 contestant Robbie Rosen was on-hand to kick off the Folio Awards by singing the Star-Spangled Banner; after finishing his stirring rendition of the National Anthem, the event started in earnest, hosted by Fair Media Council CEO and Executive Director Jaci Clement. 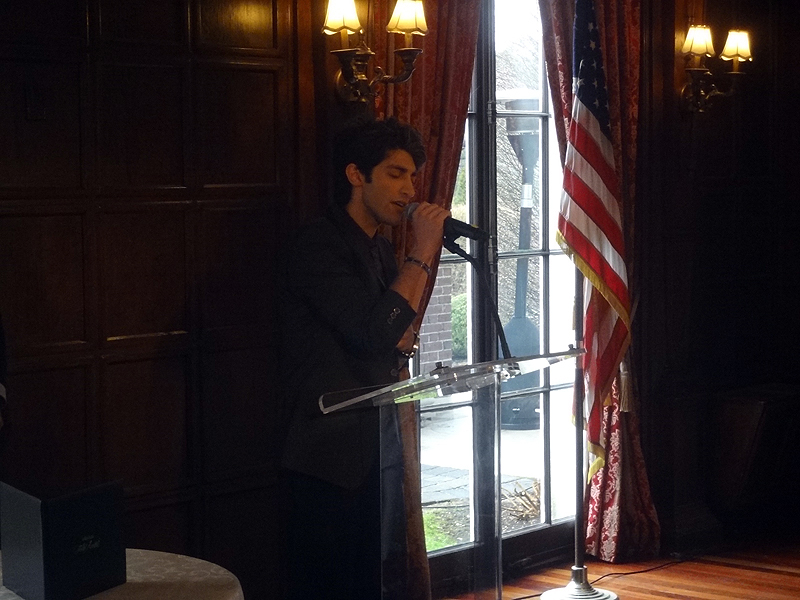 With the awards presentation held in the main ballroom and additional guests situated throughout the building watching the proceedings on wide-screen television sets, Clement delivered her opening monologue, noting that the Fair Media Council is a non-profit organization that works towards two very important goals: quality news to make for a better community, and creating a media-savvy society. These attributes,  Clement said, are vital considering the centerpiece of her speech- the plague of “fake news” – news that is biased and often completely false, but passed off as the real thing by disreputable news outlets – that is sweeping the world as of late. 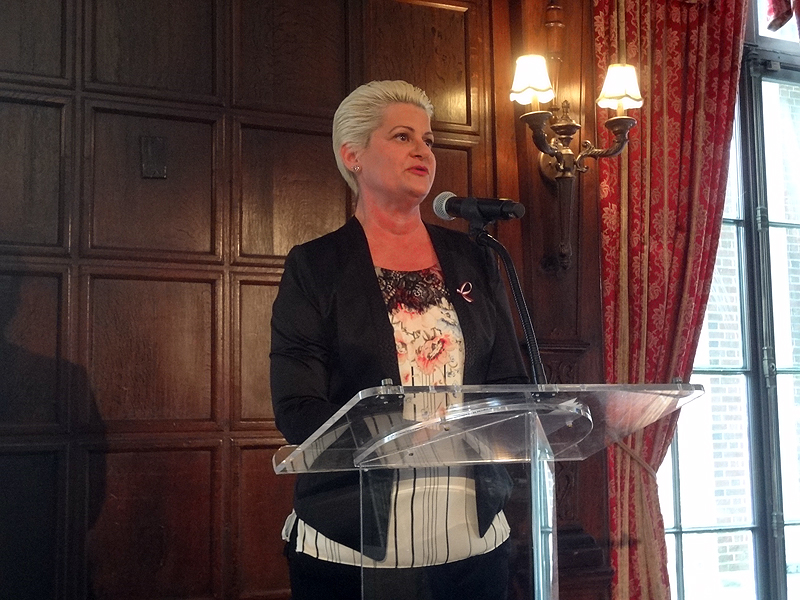 “Today we recognize the best in news and social media. A lot has changed since we met at last year’s awards…it's a very different world now,” she said. “The work of the Fair Media Council and its role in the community is more important now than it's ever been. Today, people get their news from television, print, the Internet...even their smart phones. We encompass all of that at the Fair Media Council...we’re educating the public to become media savvy, because as we saw in 2016, there's a lot of ‘fake news’ out there. And if you can't tell what's real and what's fake, how do you navigate the media landscape of today? In a nutshell, that's what our mission is.” 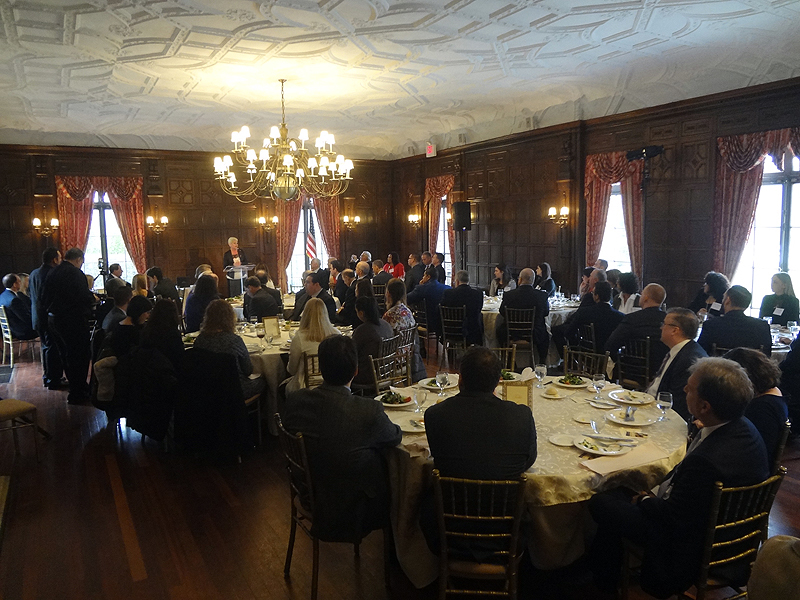 The purpose of the Fair Media Council’s 2017 Folio Awards is to salute the very best in local Long Island media and reporting. Photo Credit: Chris Boyle

Clement noted that the United States is sorely in need of media education, and that the Fair Media Council was doing everything in their power to create a bridge between the public and the media, bringing the two together and creating more relevant news as a result. And there's no place where this is more important, she said, then when it comes to local news reporting. 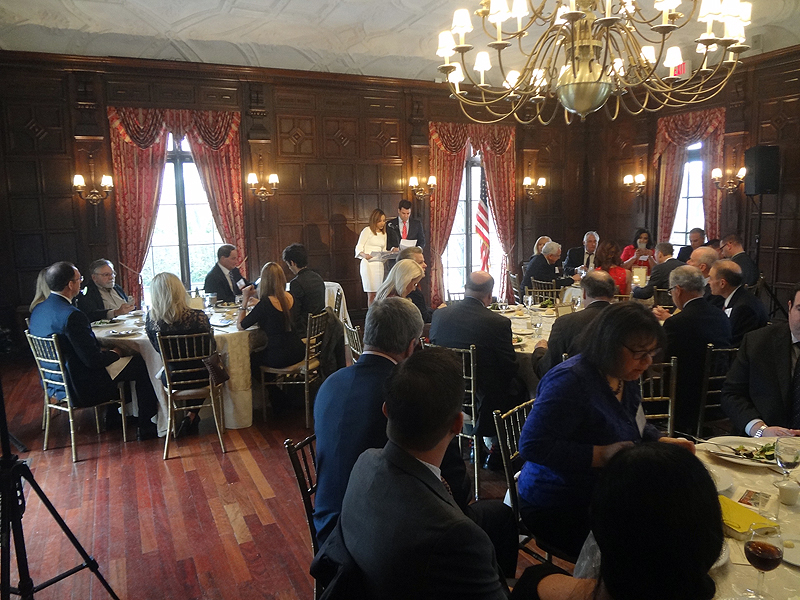 The awards presentation was held in the main ballroom and additional guests situated throughout the building watching the proceedings on wide-screen television sets. Photo Credit: Chris Boyle

“Our national media is focused on protecting our front door, and it's our local news people that are focused on protecting our backyards, and that's what we want,” she said. “And the Folio Awards are a perfect example of how this works...the stories that are winners here today are stories that work on exposing the problems in our community, and these are the problems that we as a community need to start working on to fix so we can all start living better lives.” 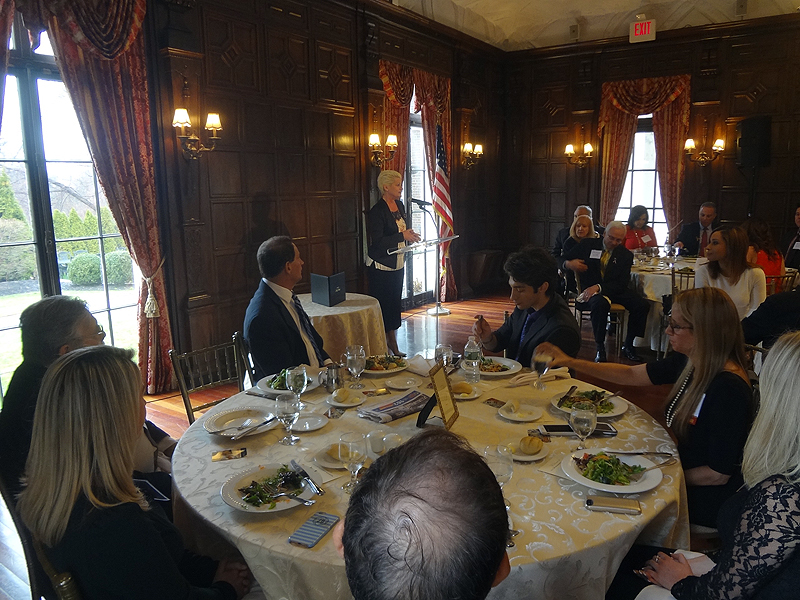 Rita Cosby - author, WABC radio host, Emmy-winning former anchor on the Fox News Channel and MSNBC, and current special correspondent for CBS' Inside Edition - was the event's keynote speaker and recipient of FMC’s Outstanding Public Service Award for her years of dedication to her craft. Cosby, during her speech, happily greeted the many colleagues and acquaintances of hers that were in attendance at the Folio Awards, noting that the tight-knit news community as a whole appreciated the support of organizations such as the Fair Media Council in their fight to deliver the truth to the American people. 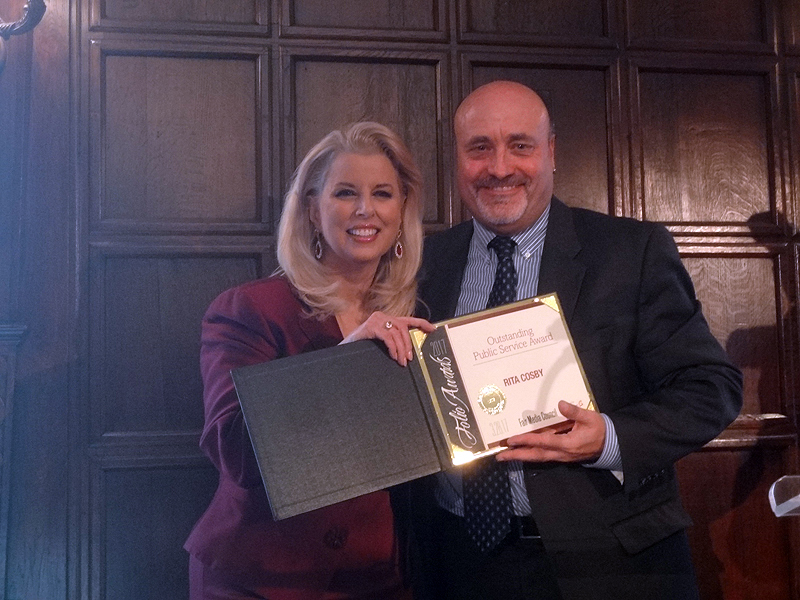 Rita Cosby was the recipient of FMC’s Outstanding Public Service Award for her years of dedication to her craft. Photo Credit: Chris Boyle

“To be here with so many old friends just makes it even more special to receive this award today,” she said. “And how awesome is the Fair Media Council? What all everything happening in the world today, this is such a critical time, and all of us in the media appreciate what you’re doing. All of us that are in the media are doing it because we love it, because we want to make a difference and do something with meaning. The Fair Media Council reminds us of why we got into this business…it’s a real gift to have someone like you supporting us.” 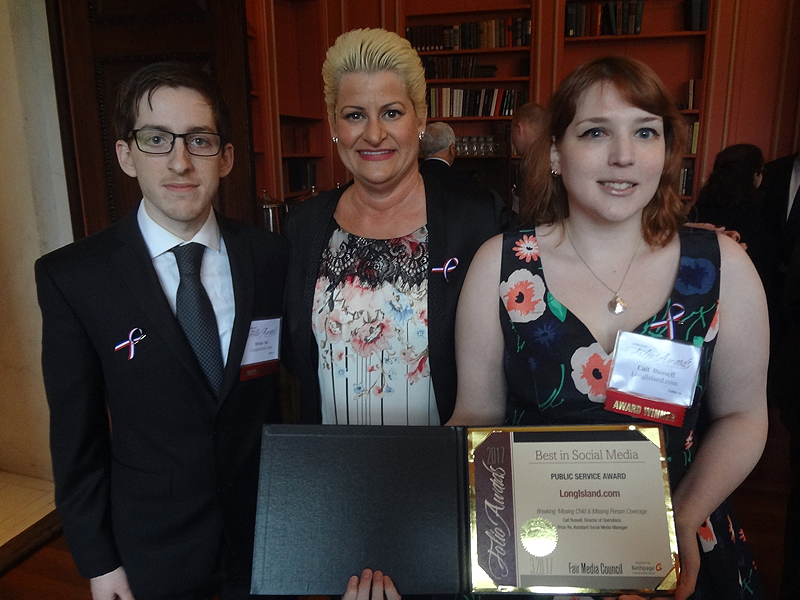 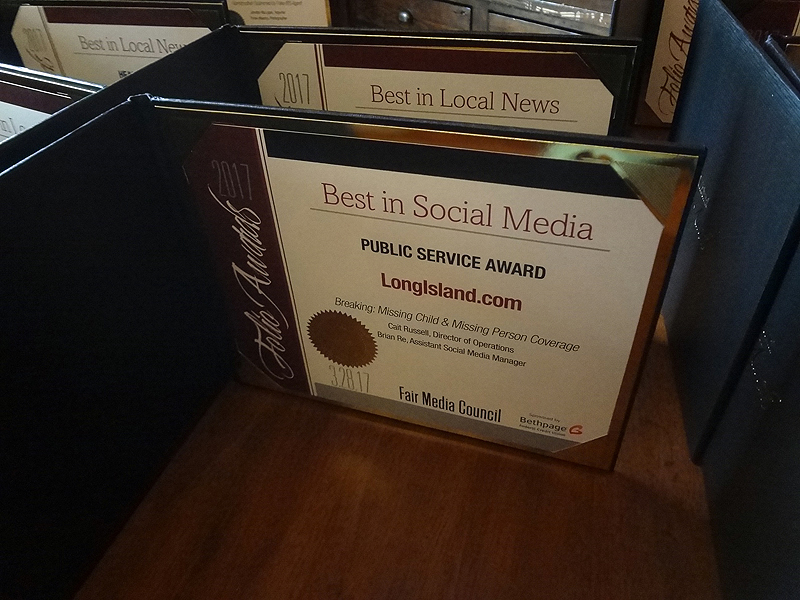 LongIsland.com was singled out for its Social Media use as it relates to its extensive and in-depth Missing Child and Missing Person Coverage throughout both Nassau and Suffolk Counties. Photo Credit: Chris Boyle

The huge and still-growing importance of Social Media was also given its due in a manner never before seen at the Folio Awards, to the point the category is actually being considered by the Fair Media Council to be held as a separate, stand-alone event next year. The categories that winners were selected from by the FMC judges included Public Service Award, Election Voting Award, Best Nonprofit Award, Media Savvy Business Award, Buzz Worthy Award, Community Service Award, and Blog Master Award. 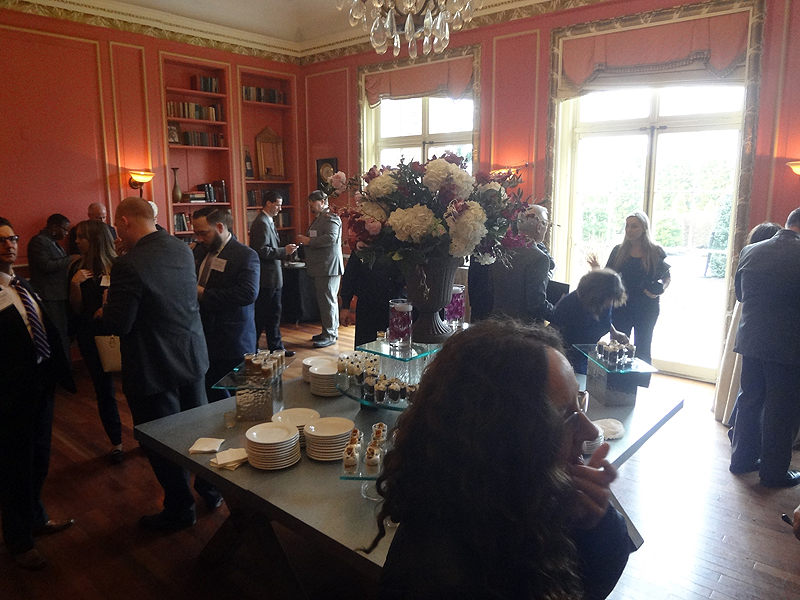 After the Folio Award recipients were announced, guests gathered for dessert and the actual presentation of the awards themselves. Photo Credit: Chris Boyle

LongIsland.com was singled out for its Social Media use as it relates to its extensive and in-depth Missing Child and Missing Person Coverage throughout both Nassau and Suffolk Counties, with LongIsland.com Director of Operations Cait Russell and Assistant Social Media Manager Brian Re winning the coveted Public Service Folio Award for their dedication to the well-being of the members of the community in which they serve.

After the awards were announced, guests gathered for dessert and the actual presentation of the awards themselves.