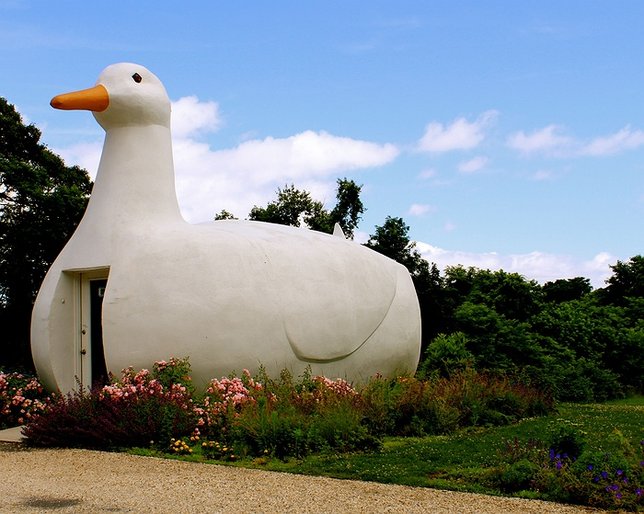 If there is one roadside attraction on Long Island that you don’t want to miss, it’s the Big Duck. This great example of roadside novelty architecture on Long Island was built in 1931 by a Riverhead duck farmer named Martin Maurer. Standing 20 feet tall and 30 feet long with red glowing eyes made from a Model T Ford. Today, The Big Duck is a national historic site and is used as a souvenir spot and tourism information center where rubber ducks and duck shaped candies can be purchased. Then see another spectacular site known as The Star Gazer in Manorville, NY, a 70 foot steel sculpture of a red deer gazing up at the sky as he eats a branch. The Stargazer is the connection of the above to the below. This is definitely a roadside site to see; recommended at sunset. 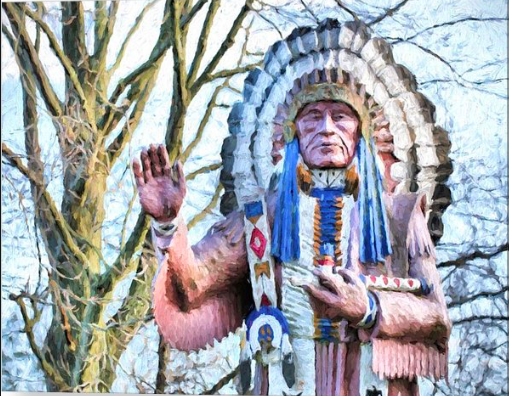 The Chief has a totem pole, buffalo, and a pink and white horse, but no eyes. At 12 feet tall, this statue of a Native American is in full head gear. One hand is raised in greeting. Have lunch in Massapequa Village and take an afternoon visit to the American Airpower Museum, Farmingdale, NY. See vintage aircraft and climb the 1940s Air Traffic Control Tower. 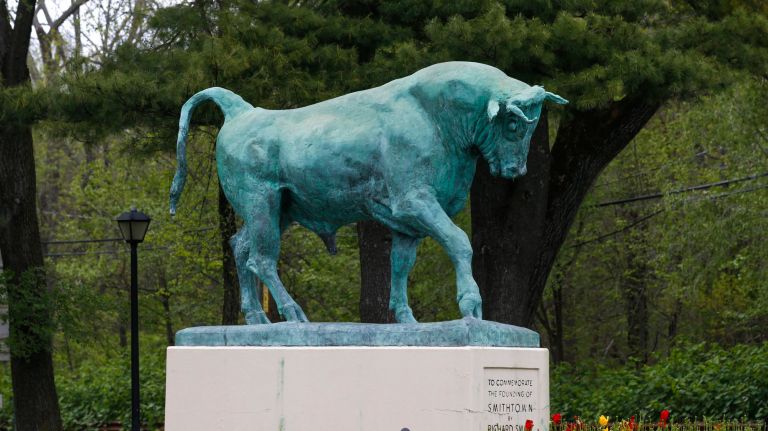 This 14-foot statue of Whisper the Bull was erected to honor the bull-riding founder of Smithtown. Displayed at the convergence of Route 25 and 25A, residents say that the boundaries of Smithtown were set when Richard (Bull) Smith rode his bull to form the perimeter. Have lunch in Smithtown. Stop in at Whisper Vineyard for wine tasting. Nearby is the 30-foot tall Wicks Farm Witch, St. James (year-round). ‘Winni’ is known for her sinister looks, frightening kids for decades. 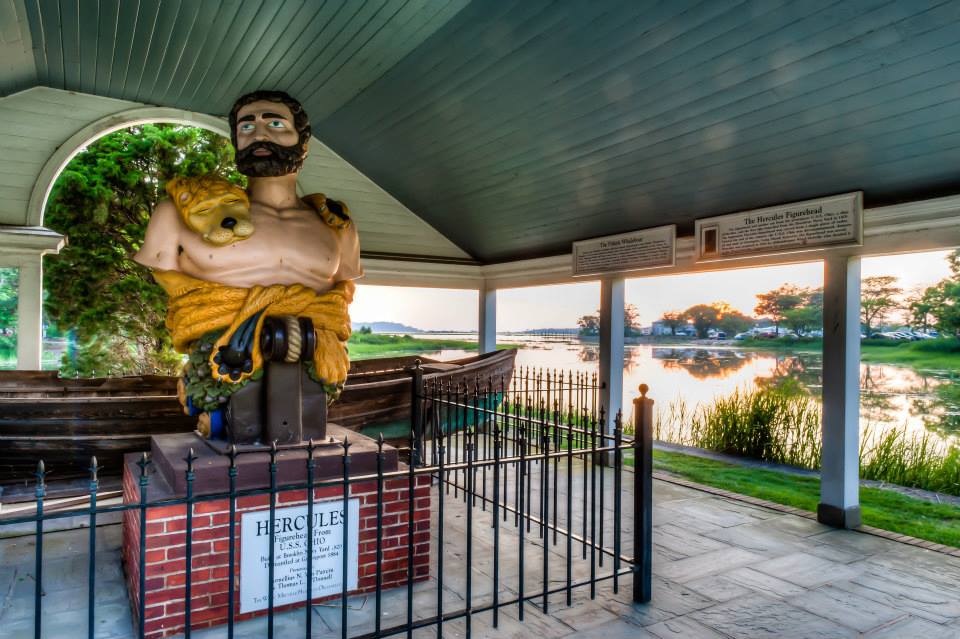 This figurehead is from the U.S.S. Ohio, the first ship launched from the Brooklyn Navy Yard in 1820. Before it was demolished, the figurehead, carved from a single piece of cedar, was saved. Across the street is the Stony Brook Post Office. Atop is a mechanical eagle perched high on a pediment that flaps its wings on the hour (8:00 am – 8:00 pm). The eagle has a 20-foot wingspan. Nearby visit the Long Island Museum of Art, History and Carriages (largest collection of horse-drawn carriages). Then ‘press the button’ to hear the roar at the Grumman Memorial F-14, Calverton. This real F-14 Tomcat is a supersonic, twin-engine two seat fighter aircraft. Built by, it is probably one of the best known fighter planes in history (think Top Gun). 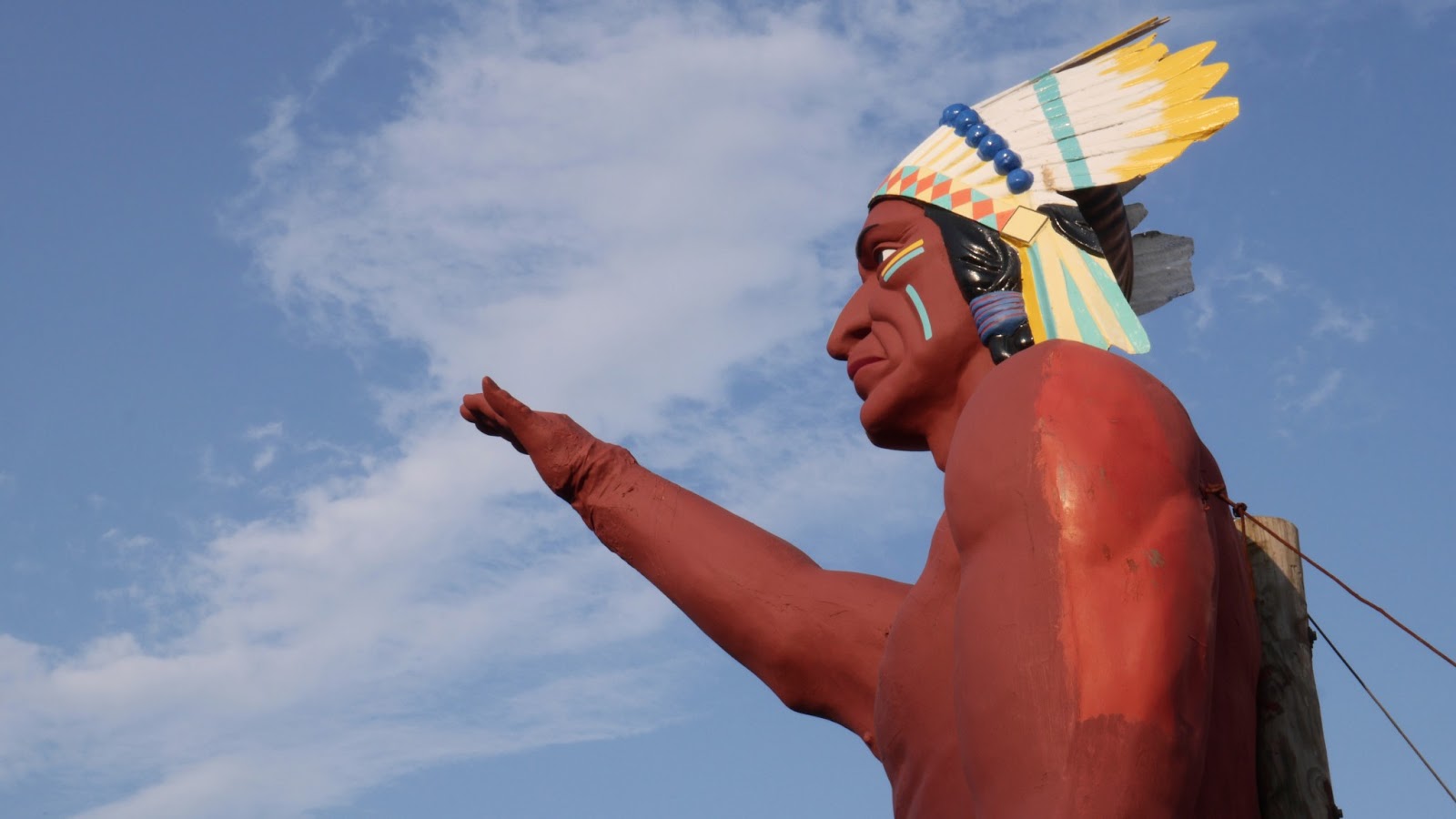 If you’re here on a Saturday summer night, catch a race and greet the 12-foot tall Riverhead Raceway Indian who has been standing watch over the quarter-mile oval race track for more than 30 years. Some may recognize him from an episode of the Sopranos. Spend the day in Riverhead. Visit the aquarium, Splish Splash Water Park or Tanger Outlet Center. Take wetlands cruise along the Peconic Bay with the Atlantis Tour Boat. Catch a show at the Suffolk Theater in Riverhead and try some local food, brews and wines in town.