More than a kilogram of heroin, 192 grams of cocaine, one firearm, 22 pounds of marijuana and approximately $220,000 were seized, Singas says. 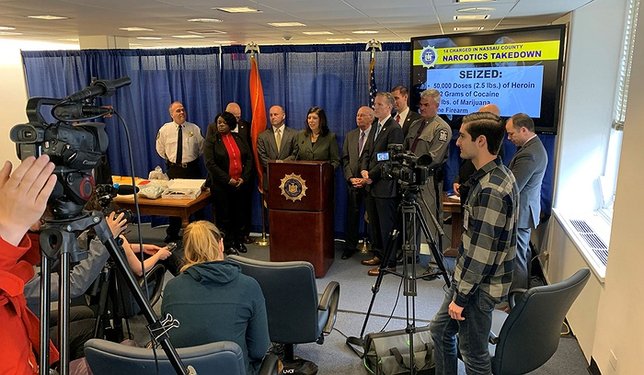 Mineola, NY - March 29, 2019 - Nassau County District Attorney Madeline Singas announced today that 14 individuals have been indicted by a grand jury on various charges of drug trafficking, weapons and conspiracy in Nassau County.
The 14 defendants are charged with various crimes in one-33-count indictment and a separate three-count indictment including Operating as a Major Trafficker (an A-I felony), Criminal Possession of a Controlled Substance in the First Degree (an A-I felony) and Conspiracy in the Fourth Degree (an E felony). Two of the defendants face 25 years to life in prison if convicted on their top charges. Three defendants have not yet been arraigned.
As a result of executed search warrants, more than a kilogram of heroin -  approximately 50,000 doses – 192 grams of cocaine, one firearm, 22 pounds of marijuana and approximately $220,000 were seized.
“The heroin sold by this drug trafficking ring has been linked to at least one fatal overdose, underscoring the lethality of the poison that these defendants allegedly sold to line their pockets with illicit cash,” DA Singas said. “Thanks to the teamwork of the FBI Long Island Gang Task Force, we’ve removed at 50,000 doses of heroin from our streets and we are committed to ending this epidemic with every tool at our disposal.”
“The spread of dangerous and often deadly opioids is leaving a devastating wake in Roosevelt, and other communities in Nassau County. Our partnerships in Nassau County and with other local, state and federal agencies allow us to use as many resources as possible to put these criminals out of business,” said William F. Sweeney, Assistant Director-in-Charge of the New York FBI. “The FBI Long Island Gang Task Force wants this investigation to serve as a warning to all the dealers who hope these arrests leave a void they can fill - we will pursue them, and do all we can to stop their illegal drug trade.”
Nassau County Police Commissioner Patrick Ryder said, “Today’s announcement of the 14 defendants being criminally charged under this operation resonates the fact that the combined efforts of the Nassau County Police Department, the District Attorney’s Office and the FBI Long Island Gang Task Force working cohesively together, did an outstanding job in removing criminals and drugs from our streets. We have removed a major drug trafficker and numerous other dealers off our streets which makes our communities a safer place to raise our families. 50,000 doses of illegal heroin, other dangerous drugs and a firearm off our streets which will never come in contact with the public which ultimately equals lives saved. Congratulations to all of the dedicated investigators and agencies on this case for a job well done.”
New York State Police Major David Candelaria, Troop L Commander, stated, “Drug dealers bring fear and violence to our communities. This investigation is yet another example of a successful interagency cooperation, leading to the removal of dangerous narcotics from our communities and the arrests of those responsible. The New York State Police will continue to work relentlessly with our federal, county, and local law enforcement partners to combat the illicit drug trafficking on Long Island.”
Freeport Police Detective Sergeant Donnie Ethier said, “Over the past six years the Freeport Police Department has seen a significant decrease in crime. This successful multi-jurisdictional collaboration is one of the tools used to accomplish our crime reduction mission.”
“Today’s arrests should send a strong message to drug traffickers that law enforcement will spare no resource or expense to protect the communities they serve from the vicious cycle of addiction and despair created by these miscreants,” said Inspector in Charge, Philip R. Bartlett.
DA Singas said that according to the 33-count indictment, the NCDA and FBI Long Island Gang Taskforce began investigating two alleged narcotics dealers, Darrell Boyd, A/K/A ‘Fab’ and Jason Costa in March 2018.
The indictment alleges that Darrell Boyd operated as a mid-level drug dealer from his Freeport home, assisted by his nephew Jason Costa and an unnamed associate. Costa allegedly sold to customers when Boyd wasn’t available and the unnamed associate bagged heroin into glassine envelopes.
According to the indictment, in addition to selling from his home, Boyd sold drugs directly to customers from his job as a janitor at the Cerebral Palsy Association of Nassau County.
Several of Boyd’s customers included Joey Bell, Darrell Wilson and Darren Bruce, who allegedly bought heroin for resale, not personal use, based on the quantities they were buying.
Over the course of the investigation, defendants Tony McClam, Leonard Forbes, Christopher Thomas A/K/A ‘Poke’ and Kenta Powell were allegedly identified as Boyd’s drug suppliers. Boyd allegedly acquired the drugs from his suppliers on a consignment system and repaid the dealers after he sold the drugs.
As one of Boyd’s largest suppliers, McClam is alleged to have large amounts of narcotics shipped to New York from California. On February 25, 2019, a search warrant was executed on McClam’s home and approximately 1,200 grams of heroin, 19 pounds of marijuana and $890 in cash were recovered. Some of the heroin was found inside a large homemade candle. Additionally, more than $215,000 was seized from his bank accounts.
At least one known fatal overdose is allegedly connected to this ring.
The investigation is ongoing.
The NCDA thanks the following agencies for their assistance on this case:
Senior Assistant District Attorney Lee Genser and Assistant District Attorney Michelle Kantor of DA Singas’ Special Operations Narcotics and Gangs Bureau are prosecuting this case.
A criminal charge is an accusation. A defendant is presumed innocent until and unless proven guilty.