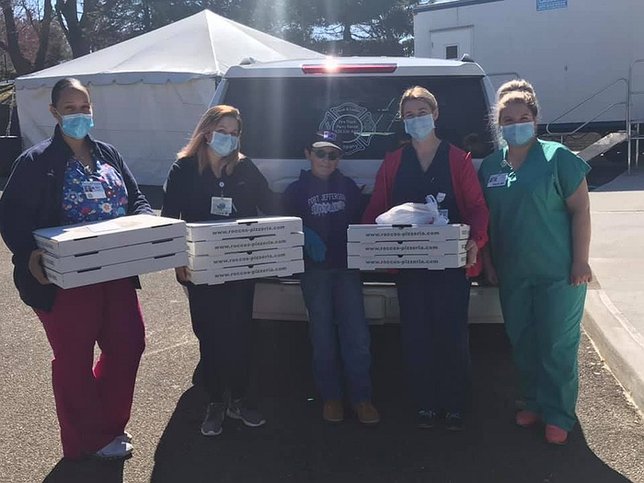 When 11-year-old Nick Rodriguez and his family decided to get out of the house for a drive after being sheltered in at home for a few days they passed by St. Charles Hospital in their hometown of Port Jefferson.

Outside of the hospital they saw the tents set up and medical workers who are on the front lines of the coronavirus epidemic.

This sparked an idea in young Nick’s head.

“Because they’re doing so much for us in this tough time right now and I wanted to give back,” Nick explained to LongIsland.com by phone.

His idea: Deliver the emergency room staff pizzas for lunch.

So Nick went on Facebook and all on his own, he set up fundraisers for both St. Charles and Mather Hospitals, both located near each other in the village of Port Jefferson.

Things didn’t work out exactly as planned, according to Nick. The way he set up the fundraisers on the social media site, the money he raised went directly to the hospitals instead of coming to him.

Disappointed, Nick’s parents then decided they would help him fund his idea.

“I took the money out of my bank account,” Nick said.

Nick’s mother encouraged him to take action and the young actor who plays Oliver in the annual Port Jefferson Village Dickens Festival called St. Charles Hospital and Mather Hospitals to tell them about his idea. He was able to get through to a St. Charles Hospital administrator who green-lighted his plan.

The family went to their go-to pizza place, Rocco’s in Mount Sinai, and ordered ten pies. The pizzeria gave them a discount on the pizzas and even offered to deliver them to the hospital but while Nick appreciated the offer he wanted to do the deed himself.

On Facebook, the hospital posted a picture of Nick and thanked him for his generous donation.

“Thank you Nick and happy birthday to one very special young man,” the hospital wrote in the post.

He is also a talented actor and musician who plays five instruments (piano, bass, guitar, trumpet, and drums), he sings, and was going to play a part in the Port Jefferson high school production of “the Wizard of Oz” as a munchkin - until it was canceled due to the COVID-19 oubreak.

When asked if he plans to do something like this again for the people who have been putting their lives on the line, Nick did not hesitate to answer.