The show will run Saturday night with a Sunday matinee at North Merrick’s Brookside School. 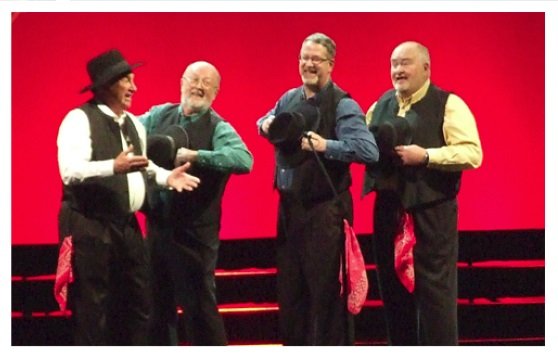 Westbury, NY - March 25, 2016 - New York and some of the wide ranging reasons forits tremendous pulling power in continuing to attract bedazzled visitors while retaining its proud residents,comes under the musical scrutiny of one of Nassau County’s long-running vocal organizations, when the Long Island Harmonizers chorus takes the stage of the Brookside School the evening of Saturday, April 30 and a matinee performance the following afternoon to present “Harmony In New York,” its 66th Annual Show .Members of the Barbershop Harmony Society’s Nassau Mid-Island Chapter will showcase barbershop melodies in four-part harmony that underscore New York’s special allure.The school facility is located at 1260 Meadowbrook Rd. North Merrick, NY.
“Song hits like ‘Give My Regards to Broadway,’ bringing to mind the intersection at Times Square that draws more than 30 million people each day; and ‘Take Me Out to the Ballgame’ prompting thoughts of our major league stadiums in the Bronx and Queens that together registered some 5.7 million admissions for its home games in 2015, are just two of the ways we will pay tribute to our exciting five boroughs,” noted Wayne Lazar, Show Chairman. 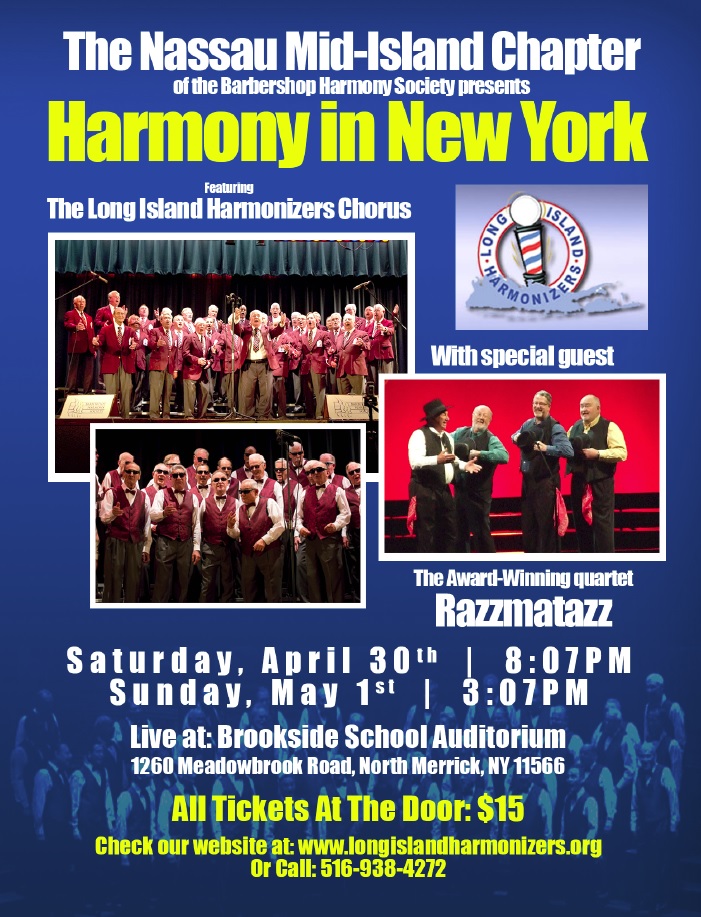 “The appearance of this year’s guest entertainers during the two-hours of song will mark the return of a barbershop comedy quartet named ‘Razzmatazz’ that drew laughter at our annual show a number of years ago,” Lazar further observed. “We are pleased to have the foursome back again to exhibit the same wit that was responsible for them capturing top honors at our Society’s Buckeye Invitational Funny Bone Comedy Quartet Competitions in 1997.”
All tickets to the 2016 show purchased at the door will be priced at $15. The Saturday evening performance begins at 8:07 pm and the Sunday matinee starts at 3:07 pm.  Cost if payment is received in advance is $13 for seniors and students; $15 for others. A ticketing order form appears on the Chapter's website.
For answers to additional questions such as arrangements for organizational groups, seating for the handicapped or for any other information call 516-938-4272 or 516-524-8553. As in previous years, a portion of the proceeds from both shows will be redirected to worthy Long Island charities.
The nonprofit Long Island Harmonizers chorus under the direction of Maurice Debar, rehearses Tuesday evenings at Winthrop Hall, Church of the Advent, 555 Advent Street, in Westbury from 7:30 until 10 pm. Those interested in joining the local Nassau Mid-Island Chapter with its more than 40active members,are welcome to come listen and, if they wish, apply with a simple audition.