Wantagh railroad station has had broken elevators to platform, forcing riders with disabilities to miss trains, use other stations, as train platform is unreachable. 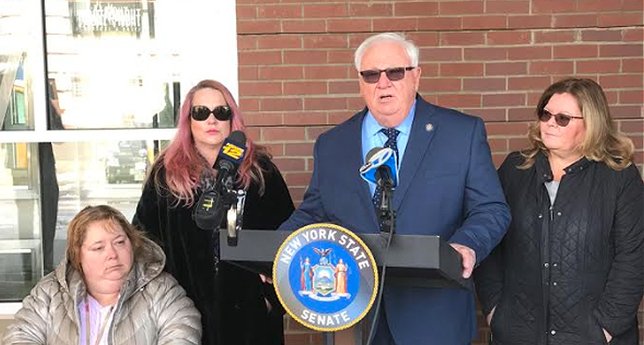 Long Island, NY - March 23, 2018 - Senator John E. Brooks today joined with LIRR commuters on the Babylon Line, some with disabilities and mobility issues, for a rally to fix the elevator and handicap-access mechanisms at the Wantagh LIRR Station.
Over the past few weeks, there have been reports of broken and stalling elevator incidents, which have caused individuals who use them on a daily basis to miss trains and/or utilize the surrounding LIRR stations. In two separate incidents, the elevator stopped, each time trapping 11 people who waited until emergency personnel could remove them through the roof of the elevator-car.
Senator Brooks said, “Once again, we are calling on the LIRR to meet the needs of all their customers, including commuters and travelers with disabilities and mobility issues. As a singular situation, it is unacceptable that Wantagh’s newly-installed elevator is malfunctioning and trapping LIRR passengers, but compounding this problem is the fact that the LIRR Babylon Line has a stretch of four stations with no elevators at all: Amityville, Copiague, Lindenhurst and Massapequa Park. Decades after the ADA became the law of the land, this failure to provide elevators demonstrates an egregious lack of concern for people with disabilities. I will continue to address these problems until the LIRR corrects them.”
Wantagh residents, especially those whose platform-access depends on the functionality of handicap-accessible elevators, are fed up with the inaction on the part of the LIRR to ensure a safe and reliable environment for those with disabilities. In many locations, no handicap accessible curb cuts are available, meaning those in wheelchairs cannot even access the ticket booth.
Assemblywoman Kimberly Jean-Pierre said, “At a time when so many folks rely on the Long Island Railroad for transportation— including those with physical disabilities and mothers with baby strollers—it is unacceptable that several consecutive LIRR stations still lack basic accessibility for these individuals. It is high time for the MTA to recognize that access to public transportation is a fundamental right that must be afforded to everyone, regardless of physical ability.”