The family’s dogs were euthanized in February 2013. 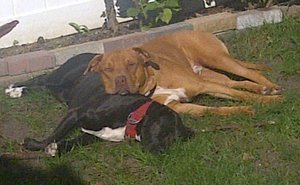 A Uniondale family is filing a lawsuit against the Town of Hempstead Animal Shelter for euthanizing two of their dogs in February.

On February 15, 2013, Nassau County police were called to Uniondale after the two pit bulls had reportedly chased a group of children. Due to an incident in Lakeview three days prior, police responded heavily, sending multiple units and a police helicopter.

The two pit bulls had already returned to their home and were in their owner’s possession when police arrived at the scene.

The owner of the pit bulls was pressured to give the animals to the Town of Hempstead Animal Shelter. Although the owner was not legally required to give up the dogs, he did so under the impression that he would only have to pay a fine.

The family then contacted the Nassau County SCPA to investigate. The SCPA discovered that neither of the dogs had bitten anyone. They had both been known around the neighborhood as friendly.

Following the investigation, the SCPA also concluded that the owner was not legally required to give up the dogs to the animal shelter. The owner, who does not speak English, was apparently facing intense pressure from both the animal shelter and police when he gave up the animals.

Cindy Iacopella, Director of the Town of Hempstead Animal Shelter, did not comment as to why the pit bulls were euthanized. Iacopella did state that the animal control officers at the scene acted appropriately.