Appropriating $1.5 Million in Funds for the Removal of Toxic and Hazardous Materials in County Parks also among topics also being covered at meeting. 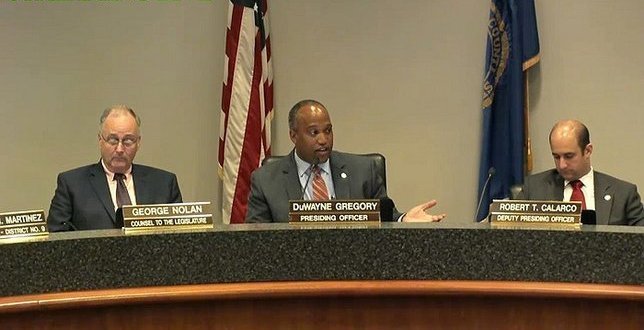 The Suffolk County Legislature in session.

Hauppauge, NY - March 20, 2018 - Members of the Suffolk County Legislature are expected to consider amending the local law to require the Police Department, District Attorney, Sheriff’s Office and Probation Department to file quarterly reports detailing receipts and expenditures of asset forfeiture funds for the prior year at their meeting today, March 20, at the William H. Rogers Legislature Building in Hauppauge at 9:30 a.m.
The measure, which amends a law passed in 2017, changes reporting requirements from annually to quarterly reporting on March 15th, June 15th, September 15th, and December 15th.Reports will be submitted to the County Executive, County Comptroller and County Legislature.
Presiding Officer DuWayne Gregory said the measure is a common sense initiative to ensure all funds are properly accounted for. “This is necessary to ensure transparency by identifying outside agencies to which the funds are expended, the amount provided and the purpose of the funding.”
Lawmakers will seek to strengthen the Animal Abuse Offender Registry by increasing the length of time individuals are required to remain on the registry, requiring registrants to update their information within 15 days of moving, prohibiting those on the registry from owning any animals as long as they are required to be on the registry and updating the definitions of abuse crimes to be included on the registry.
The registry will be created and maintained by the Suffolk County Police Department and the District Attorney will be required to update the Police Department with information on pleas and convictions.
Legislators will also consider appropriating $1.5 million for the removal of toxic and hazardous materials in County parks. The majority of these funds will be used to remediate and restore the area of West Hills County Park where illegal dumping was discovered.
In addition Legislators will weigh:
Public Hearings scheduled to begin at 2:30 pm include:
For additional information, visit www.scnylegislature.us/ or contact Fran Evans at (631)853-5499.