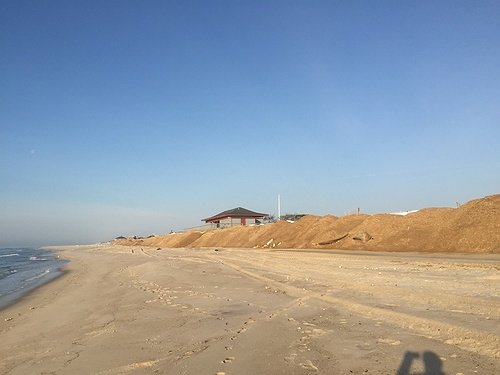 East Quogue, NY - March 18, 2015 - Governor Andrew M. Cuomo today announced New York State will provide approximately $1 million in NY Works funding to restore a sand dune at Tiana Beach in Suffolk County to prevent a breach of the protective barrier island. The dune replacement, which will be completed in time for the summer tourism season, is necessary to sustain the region's natural setting. Much of the area had been left vulnerable following coastal erosion from major nor’easter storms in 2013 and 2014.

“Today we are continuing to build back stronger and smarter to meet the new reality of extreme weather,” Governor Cuomo said. “This project is a critical part of the effort to protect Tiana Beach and the surrounding communities from the dangers of storms like Hurricane Sandy, and I am proud that our administration is moving it forward.”
More than 50,000 cubic yards of sand will be used to repair approximately 3,000 linear feet of the dune. Once reconstructed, the dune will absorb energy from the waves and wind, helping to prevent or minimize damage. Tiana Beach is located within the Hampton Bays on the West Hampton Barrier Island. Barrier islands prevent the mainland from facing the full force of a storm. If dunes on the barrier island wash away during a coastal storm, a breach could occur, leaving mainland homes and structures susceptible to significant damage.
Suffolk County Department of Public Works is currently placing the sand and forming it into protective dunes as the Town of Southampton manages the project. Photos of the dune reconstruction can be viewed here, here and here.
NY Works will provide 70 percent reimbursement for the approximately $1.42 million project; Suffolk County and the Town of Southampton will fund the remaining portion of the project. The Town of Southampton began the dune re-nourishment work in January and expects to complete the project by April 1.
State Department of Environmental Conservation Commissioner Joe Martens said, “Under Governor Cuomo, the state has provided critical assistance to ensure communities are prepared for potential storms, especially in coastal areas that bear the brunt of storm surges. DEC is pleased to work with the Town of Southampton and Suffolk County on this vital project to enhance the safety of residents and the local community.”
Senator Ken LaValle said, “I am pleased that we are restoring the dune on the Tiana beach barrier island after several major storms have ravaged the area. Maintaining the protection provided by the barrier beaches along our southern shores is crucial to preventing the widespread devastation we saw with Superstorm Sandy. We must assist nature in re-building the dunes along the ocean to preserve marine and plant life and property.”
Assemblyman Fred W. Thiele, Jr. stated, “I wish to thank the Governor for his pro-active approach to addressing coastal issues along our barrier beach at Tiana. This is a great example of the state working with local government to protect our communities from potential damage from future storms. This type of foresight will help to avoid the type of damage that occurred from breaches to the barrier beach in Westhampton in the 1990s. This $1 million investment today will help to avoid the millions of dollars of losses that could be inflicted on homes and businesses if a breach were to occur.”
Suffolk County Executive Steve Bellone said, “The dune restoration at Tiana Beach is critical in our efforts to rebuild our coastline stronger, and is vital in ensuring the safety and well-being of our residents on the East End as well as the thousands of tourists who visit Suffolk County every year. By collaboratively working together with our state and local officials, including Governor Cuomo and Supervisor Throne-Holst, we are proactively working to reconstruct the dunes in order to provide optimal storm damage reduction along the South Shore from coastal erosion and tidal inundation.”
Southampton Town Supervisor Anna Throne-Holst said, “This emergency project is a shining example of state, county and town government working together to proactively address a perilous situation. The Town is enormously grateful to the New York State DEC for its swift response to the Town’s request for assistance, and to Suffolk County for its active support of the arrangement and its extensive collaboration during construction."