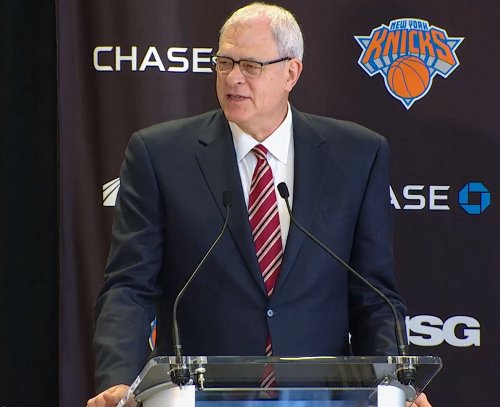 In what has been one of the worst kept secrets in professional sports, the Knicks today announced that Phil Jackson has signed on as President under a five-year contract. Talks and negotiations which have been ongoing since December concluded in a press conference at Madison Square Garden to broadcast the master of the triangle offense’s return to New York.

Jackson has a long, storied career in the NBA. He played with the Knicks from 1967-1980—making him a member of the last two championship Knicks teams in 1970 and 1973— and finished his player career with the New Jersey Nets. He coached the Michael Jordan-era Bulls, winning 6 championships in his tenure there, then moved on to win 5 more championships as the coach for the LA Lakers.

With his return to MSG, the new head of operations faces a tough road ahead of him.  While the team went 54-28 last year in its first full season with Carmelo Anthony and won its first playoff series in years by beating the Boston Celtics, the ensuing second-round series against the Indiana Pacers exposed a number of weaknesses in the team as they were knocked out in six games.

Since that series, the Knicks have struggled to show the same promise they did a year ago. They currently stand at a meager 27-40 and are 4.5 games out of the Eastern Conference’s eighth seed. While they have recently gone on a six-game winning streak, the victories have come against teams without winning records. Though they may look sharper than they have through most of the year, the Knicks’ sudden spurt of team chemistry will not be truly tested until they play the top-ranked Pacers at 8 PM tomorrow.

Speaking at the press conference this morning, the Zen Master said he hoped to fix the Knicks’ troubles by “developing a culture,” stating that he wants to provide support for his players, develop “a health record in which injuries are limited… a mindset in which focus is a capability,” and “developing a system so that balls are moved and passes are made…to create open opportunities for teammates.

“I believe in system basketball,” he added.

Jackson said a lack of continuity and solidarity has contributed to the team’s recent struggle. “The players need a positive atmosphere in which to play. I think that’s an important thing about coming to this team and developing that.”

When asked whether he feared that agreeing to run a team which has not won a championship in 41 years might end in failure, Jackson replied “No, I don’t. I think that this is an opportunity and that’s what I look at it as… a wonderful opportunity to do something that I love.”

He would not, however, commit to a timeframe for how long it will take to rebuild the team or to reach a potential title.

“We’re going to make one step at a time, and I think that’s the most important thing,” Jackson said, adding that he wants to figure out “who wants to play together, who looks like they can play together and how can we build on that?”

Jim Dolan, the team owner who has been criticized for interfering in Knicks operations too heavily—mismanaging the organization, overpaying for player contracts, and trading away draft picks for little payoff—admitted to “willingly and gratefully” ceding authority to Phil Jackson. The new president replied that he would not have accepted the job if he would not have complete authority to do what he feels necessary to right the Knick ship.