Legislator McCaffrey Honors the 2015 Hibernian of the Year

Suffolk County Legislator Kevin McCaffrey had the honor of recognizing Brian Maher as this year’s “Hibernian of the Year” for the Ancient Order of Hibernians, Division 2, in Babylon. 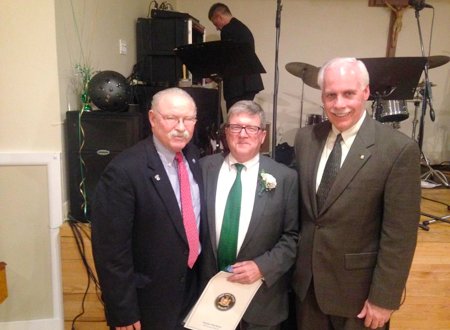 Babylon, NY - March 16, 2015 - Suffolk County Legislator Kevin McCaffrey (R – Lindenhurst) recently had the honor of recognizing Brian Maher as this year’s “Hibernian of the Year” for the Ancient Order of Hibernians, Division 2, in Babylon.  The event was widely attended by local Hibernians, family and friends of Mr. Maher, and elected officials from the surrounding community.
Maher’s presence has been a tremendous asset in not only the field of teaching, but within the ranks of various causes and community service-based organizations.  Some of his most notable accomplishments involve his fundraising efforts to benefit Good Samaritan Hospital, the Dominican Sisters of Amityville, Good Shepard Hospice, Our Lady of Consolation, Telecare, St. John the Baptist High School, Providence College, and the Eastern Amputee Golf Association.
“Mr. Maher truly embodies everything that we could ask for in a citizen,” said McCaffrey. “Balancing the demands of one’s family and profession, with those of all the causes and organizations to which he is committed is no easy task.  As a fellow Hibernian, I know just how lucky the AOH is to have Mr. Maher within its membership.  I can think of no better person worthy of the title ‘Hibernian of the Year’ for 2015.”
The Ancient Order of Hibernians is an Irish-American Fraternal Organization which was originally founded in New York City during the early 19th century.  In addition to its commitment to maintaining the cultural and historical ties between Ireland and its members, it is devoted to community service and the advancement of human rights.