Team Will Now Serve as Alternates for Nationals in Washington D.C. 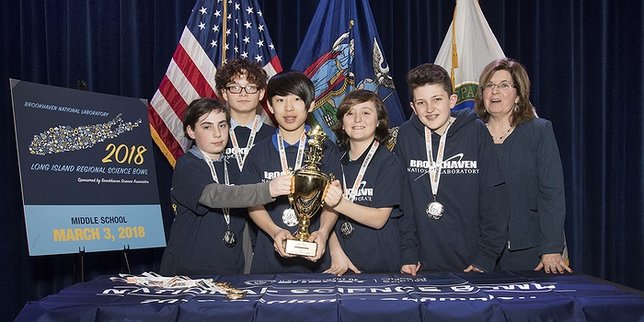 Long Island, NY - March 16, 2018 - Earlier this month, the Mastic Beach William Floyd Middle School Quiz Bowl team, led by advisor and science teacher Mary Nappi, took second place in the Regional Science Quiz Bowl Tournament held at Brookhaven National Laboratory, a fast-paced 19-team competition covering a range of disciplines from the life sciences, earth and space sciences, general science, mathematics and energy. For their efforts, the team, consisting of Ian Hua (captain), Brendan Bertos, David Montenegro Jr., Adam Schultzer and Andrew Sweet, took home silver medals and a trophy. They will now serve as the alternate team for the National Finals in Washington, D.C., in late April.
The finals saw the William Floyd Middle School team come just one question short of the gold in a fiercely competitive match against Great Neck South Middle School. They certainly made their presence known throughout this year’s competition which included victories over very tough competitors from the Three Village, Commack and Locust Valley school districts. The William Floyd Middle School team has had much success in this competition taking first place in their division four times in the past five years and earning fourth-place overall the past two years.
“Ms. Nappi’s dedication to the success of this team over the years, her tireless practices and willingness to go above and beyond in teaching the students the material they need to be successful in this highly-competitive contest has surely been the catalyst for their accomplishment,” said Carolyn Schick, Principal, William Floyd Middle School. “And of course our extremely intelligent students, who worked so hard learning and preparing, as well as mastering the ‘bundle-of-nerves syndrome’ by buzzing in correctly and adhering to the many rules that are inherent to the competition.”
William Floyd Middle School Team 2 also put forth a great showing in the competition and were eliminated from making it to the final round by a tie-breaker question. Members of Team 2 include Captain: Chloe Hangley Malik Bright, Thomas Francis, Logan Novick and Dylan Ward.