Players took pictures with kids, played some of games and spoke to the kids’ about their personal experiences of not letting diabetes stop them from reaching their goals. 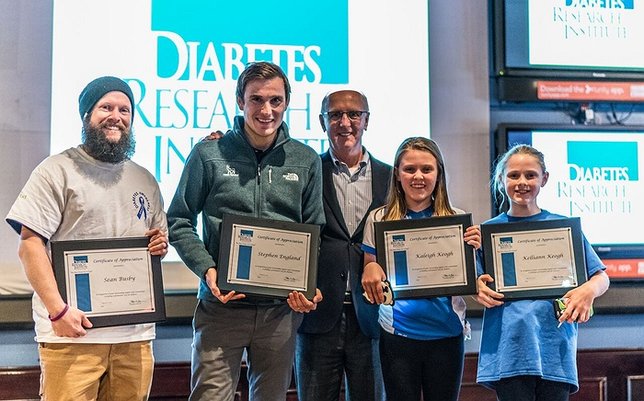 Westbury, NY - March 16, 2016 - Taking a break from hitting the slopes and road across the globe, professional Snowboarder Sean Busby and Marathon Runner Stephen England made a stop in Westbury, New York this month for a special meet and greet with kids – who like them – are living with the disease, type 1 diabetes. Their special visit was part of the annual Kids’ Carnival for a Cure at the Dave & Busters in The Source at the Mall – where hundreds of kids and their parents gathered to meet and greet the athletes and enjoy a fun-filled day of games and activities. The event raised more than $97,000 to benefit the Diabetes Research Institute’s (DRI) work toward finding a cure.
Busby and England took pictures with kids, played some of games and spoke to the kids’ about their personal experiences of not letting diabetes stop them from reaching their goals.
Busby - who was diagnosed with type 1 diabetes at the age of 19 - is the founder of the nonprofit for kids with diabetes Riding On Insulin and became the first person with type 1 diabetes to backcountry snowboard all seven continents.
“I am especially inspired by children with T1D, who have to grow up with an intimate awareness of their bodies' limitations and needs. I understand them and what they are going through,” said Busby addressing the crowd at the event. “I believe I was given this disease for a reason, and that's to show others anything's possible. It is a privilege to celebrate these brave boys and girls. It’s awesome for them to have such a great day together and I am happy to be part of it.”
England – who was diagnosed at 14 years old – is a long distance and ultra-marathon runner with team Novo Nordisk, a group of cyclists, triathletes and runners all living with T1D, competing in races across the United States and worldwide.
“It’s an honor to be here today,” said England, who also competes in several top marathons, including the Boston Marathon, JFK 50 and the Leadville 100 where he met team Novo Nordisk. “Inspiring others, especially the children here with type 1 diabetes is what I am meant to do. The message I would like to leave is keep running the race – you can still do what you want with your life, even with diabetes.”
Also at the Kids’ Carnival was Kelliann Keogh, a ten-year-old football player from Cranford, New Jersey who does not let her diabetes stand in the way of her tackles and touchdowns. Kelliann plays halfback and safety for the Cranford Cougars in the local Police Athletic League. Her football skills are outstanding enough for any football player, and are especially significant since she faces the daily challenges of type 1 diabetes. Her sister Kaleigh, a soccer player with type 1 diabetes also attended the event.
Along with getting to meet inspirational athletes, children in attendance also enjoyed video games, bowling, billiards, prizes, food, goody bags and other fun activities for the whole family.
Co-chairs for the event are Lauren & Steven Field, Frankie Lam, and Susan Rubinstein. Generous sponsors include The Field Family, Super Shot Sponsor, Astoria Bank along with Susan and Mitchell Rubenstein & Family at the Bowling and Billiards level, Mr.& Mrs. Lawrence Mandel at the Power Card level, Frankie Lam and Jacqueline Yu and the Frisoni Family at the Guitar Hero level and Jim and Gail Whelan at the Typhoon Park level.
About the Diabetes Research Institute
The Diabetes Research Institute at the University of Miami Miller School of Medicine leads the world in cure-focused research. As the largest and most comprehensive research center dedicated to curing diabetes, the DRI is aggressively working to develop a biological cure by restoring natural insulin production and normalizing blood sugar levels without imposing other risks. Researchers have already shown that transplanted islet cells allow patients to live without the need for insulin therapy. The DRI is now building upon these promising outcomes by developing the DRI BioHub, a bioengineered “mini organ” that mimics the native pancreas. Various BioHub platforms are being tested in preclinical and clinical studies. For more information, please visit DiabetesResearch.org or call 800-321-3437. You can tweet DRI at @Diabetes_DRI.