Adelphi's Alumni House to be renamed Angello Alumni House for donation by Trustee Frank Angello ’77 and his wife Phyllis. 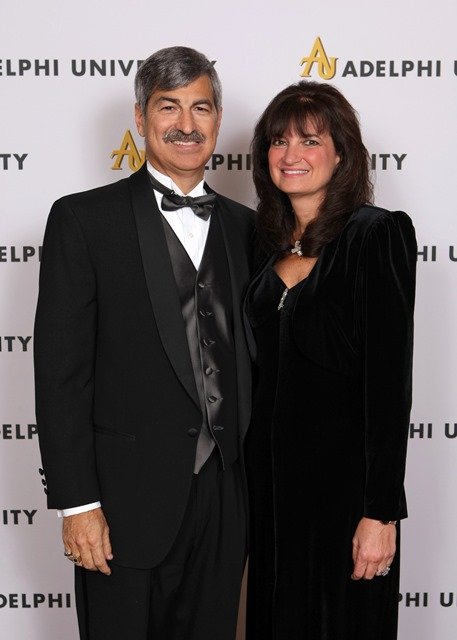 Garden City, NY - March 16th, 2015 - Adelphi University has received a $2.5 million commitment from Trustee Frank Angello ’77 and his wife Phyllis. In recognition of their generosity and their service to the University, Adelphi will dedicate the Angello Alumni House on Sunday, March 22, 2015.

Frank Angello, who earned his undergraduate degree in accounting at Adelphi’s Robert B. Willumstad School of Business, has 26 years of experience in senior finance roles at JPMorgan Chase & Co. and its predecessor banks. The retired chief financial officer of JPMorgan Chase’s Treasury and Security Services Division, he oversaw three divisional CFOs and a central team collectively employing 300 professionals globally. He played a crucial role in four transformational mergers during his stewardship. He later went on to serve as CFO of Lighthouse International, a non-profit addressing the needs of the visually disabled.

Phyllis Angello held a variety of executive and administrative positions throughout her career with the Internal Revenue Service. She worked in the Northeast Regional Office, Manhattan District Office and the Brookhaven IRS Campus, retiring in 2011 after 37 years. She currently serves on the Abilities Corporate Advisory Board at the Viscardi Center.

“Phyllis and I are very happy that the Angello name will be forever linked with Adelphi,” Frank Angello said. “It demonstrates our commitment to scholarship, the importance of scholarship in our own lives and our strong belief that scholarships matter to future generations of Adelphi students.”

Elected to the Adelphi University Board of Trustees in 2007, Frank Angello is now secretary of the board. He has served on nearly every board committee, was previously chair of the Audit Committee and is currently chair of the Finance and Administration Committee. The Angellos served on Adelphi’s Parents Council when their son Peter Angello ’11 was a student. They have also been active in their community, including leadership roles in their parish.

On Saturday, March 21, 2015, the Angellos will be honored at Adelphi’s 15th Annual President’s Gala, the University’s largest annual fundraising event for student scholarships.

The Angellos’ gift will be unrestricted, to be utilized by the board of trustees and President Robert A. Scott to support current priorities, including student scholarships and campus enhancements. The Angellos are members of the Ruth S. Harley Society, which recognizes those who have made provisions for Adelphi in their estate plans, and, with this gift, they become the newest members of the University’s Million Dollar Round Table.

The Angello Alumni House, at 154 Cambridge Avenue on the Garden City campus, has been a center for University and community programs and events for close to 50 years. The 5,000 square-foot facility is home to more than 500 events a year and houses the Timothy Costello Room, named for Adelphi’s seventh president.

About Adelphi University
A world-class, modern university, Adelphi has excellent and highly relevant programs in which students prepare for lives of active citizenship and professional careers. Through its schools and programs—the College of Arts and Sciences, the Gordon F. Derner Institute of Advanced Psychological Studies, the Honors College, the Robert B. Willumstad School of Business, the Ruth S. Ammon School of Education, University College, the College of Nursing and Public Health, and the School of Social Work—the coeducational university offers undergraduate and graduate degrees as well as professional and educational programs for adults.

As a nationally-ranked, doctoral research university, Adelphi University currently enrolls nearly 8,000 undergraduate and graduate students from 43 states and 45 foreign countries. With its main campus in Garden City and its centers in Manhattan, Suffolk County and Poughkeepsie, the University, chartered in 1896, maintains a commitment to liberal studies, in tandem with rigorous professional preparation and active citizenship.