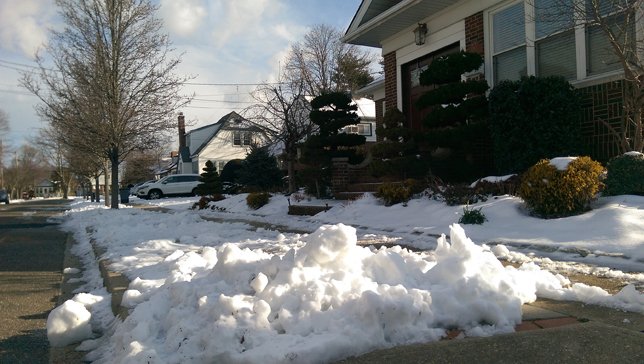 While snowfall was far less than initially expected, Long Islanders still have icy roadway conditions to contend with for the Wednesday morning commute.

Thanks to an unexpected warm front, Long Island was spared major snow accumulation from the initially-forecast “life threatening” blizzard that was later downgraded by the National Weather Service to simply a “storm.” However, that doesn’t mean that local residents still aren’t contending with difficult driving conditions and school delays the day after its passing.

Originally envisioned as anywhere from 12-18 inches of snow, Stella tracked warmer near the eastern coastline, resulting instead in precipitation mostly in the form of sleet and freezing rain; all told, most areas only reported less than 4.5 inches of actual snow, according to the National Weather Service. However, the winter beating Long Islanders were speared came at a price, as freezing conditions Tuesday night – with temperatures in the teens and continued heavy winds – have resulted in leftover rainwater and slush transforming into hazardous icy roadway conditions for the Wednesday morning commute.

Motorists are encouraged to give themselves extra time to get to work this morning, with delays reported on most major roads due to black ice conditions. Many Long Island school districts are reporting delayed start times, in some cases up to two hours or more; few districts are reported to be closed today, however.

The MTA reports that all Long Island Rail Road lines are currently running according to their regular weekday schedules and that there are no weather-related or emergency disruptions of MTA service at this time. The MTA encourages commuters to sign up for free email and text alerts to keep them abreast of any service changes or cancellations.

NICE Bus reports that all routes are currently running according to their regular weekday schedule and that roads are slick, but passable, with icy patches. However, passengers can expect heavy delays due to slow driving conditions. NICE officials have also announced that buses will not be pulling into bus stops to avoid getting stuck in slush and ice, and that passengers should use caution while boarding from the street.

Suffolk Transit reports that all fixed route service as well as SCAT (assisted transportation) service has resumed regular service and will be adhering to their normal weekday schedule Wednesday morning. Delays due to road conditions are possible.

The NWS is noting residual snow and slush will remain frozen today, as temperatures struggle to reach the mid to upper 20s this afternoon. As a result, untreated surfaces will be very slippery, and extra caution should be used while out and about today. In addition, west winds will gust to 30 to 40 mph today, resulting in the possibility of collapsed branches and power lines weighed down with any frozen slush.

For the most up to date weather information, head over to the LongIsland.com Weather Center, where you can find the latest weather forecasts, advisories and more. To get the latest traffic & road conditions before traveling, visit the LongIsland.com Traffic Center, and be sure to check out the live traffic feeds on our Traffic Cam Page. Please visit our Long Island School Closures Page for regular updates of school closings in your district.