A Queens man was arrested by state police following a routine traffic stop. 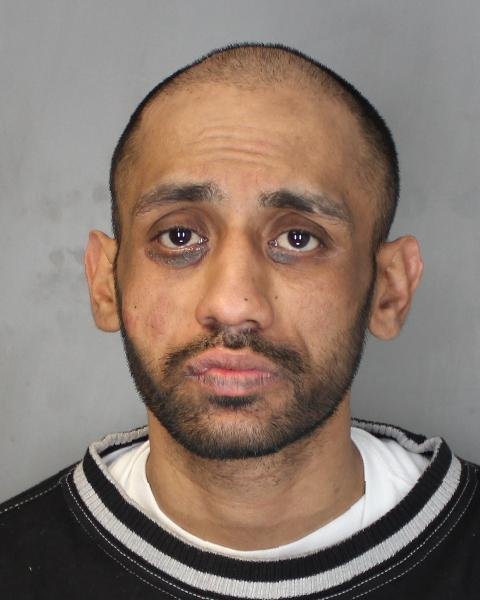 Kevin Ramlall was arrested on multiple charges after a routine traffic stop.

Seaford, NY - March 15, 2016 - On 3/8/16 at 12:52 PM, a trooper from SP Farmingdale attempted to stop a black Nissan Altima on the Southern State Parkway near Route 135. The Nissan did not stop until it was northbound on Route 135. While interviewing the vehicle operator, Kevin Ramlall, age 32, of Ozone Park, NY, the trooper detected a strong odor of marijuana and also noticed that Mr. Ramlall was extremely nervous.
The trooper asked Mr. Ramlall to exit the vehicle and it appeared that he was concealing what looked like plastic bags in the front of his pants. The trooper asked to see Mr. Ramlall's hands and he attempted to flee into the woods on the shoulder of the roadway. The trooper noticed that Mr. Ramlall was leaving a trail of plastic bags containing white powder. Mr. Ramlall was tackled by the trooper and began punching and kicking the arresting trooper. The trooper was able to handcuff Mr. Ramlall and take him into custody.
The defendant was carrying several small bags of heroin and cocaine. Mr. Ramlall had 4 grams of marijuana and over $2,200 cash on him. A digital scale and cell phones were found inside the defendant's vehicle.
Kevin Ramlall was charged with 2 counts of Criminal Possession of a Narcotic with Intent to Sell (B Felony), Criminal Possession of a Controlled Substance 7th Degree A Misdemeanor), Resisting Arrest (A Misd.), Criminal Possession of Drug Paraphernalia (A Misd.), Unlawful Possession of Marijuana (Violation), and Misdemeanor Unlicensed Operation. The defendant was held for arraignment in Nassau County First District Court.