Forces towns to reveal names of complainants about quality of life issues. 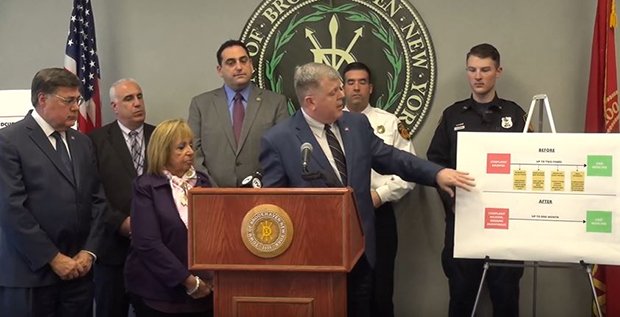 But, more importantly for local officials, it eliminates the ability of individuals to report code violations anonymously.

During the press conference, Babylon Town Supervisor Rich Schaffer said that because of the additional hurdles imposed by the state, complaints could take up to two years to resolve as opposed to one month before the law was passed, if they are reported at all.

“Complaints now have to be identified,” said Schaffer.

(Watch the full video of the press conference.)

Previously, concerned citizens did not have to put their name down if reporting a town code violation but with the new discovery law anonymous complaints cannot be accepted. As a result, residents are not reporting violations.

“Our information well has dried up,” Schaffer said.

The law has severely affected the time it takes to resolve issues and severely decreased the number of town code violations and quality of life complaints that local towns are getting. The supervisors at the press conference  want to roll back the legislature. If not, they want to be able to form their own tribunals not subject to the state’s discovery law.

Huntington Town Supervisor Chad Lupinacci recently announced that he expects his town to be the sole local municipality with what he called an antidote to the discovery law.

“The State's changes to the discovery process created a nightmare for the Town Attorney’s office and Code Inspectors seeking to resolve code violations, restore public safety and improve quality of life for our residents,” Lupinacci said in a statement.

He said that Huntongton has gotten state approved legislation enabling the establishment of the first Bureau of Administrative Adjudication on Long Island, which will not be subject to the State's new discovery obligations.

“Once it is operational, hopefully by May, residents in Huntington will be able to once again report code violations anonymously while the Town will be able to resolve these matters faster and more efficiently,” said Lupinacci.

Before the NYS changed the law, an individual would be able to report a code violation to a town anonymously; if the violation was resolved through compliance, the entire process remained anonymous, according to a description of the process by Huntington Town in a statement.

“If the Town can’t protect the privacy of individuals concerned enough to report a code violation, this makes it less likely a person will report sometimes dangerous violations and it can escalate neighbor disputes, which helps no one,” Lupinacci added.

Previously, paperwork was never turned over to the defendant unless the case went to trial.

The Huntington Town Bureau of Administrative Adjudication (BAA) resolves many of the issues created by the state law. The town is hoping to cut red tape and improve operational efficiency while maintaining the privacy of residents and individuals who report violations that do not go to trial.

One of the points of the supervisors made is that the New York State law was rushed.

“But the discovery law that the state legislature passed has done exactly that,” he said.

Romain stressed that the law has a direct effect on quality of life issues not being addressed in his town.

“So now if you live next to a guy that has a house with two illegal apartments and four or five unregistered vehicles and trash on the property if you call we are obligated by state law to tell the guy next door that you called.”

With towns having to disclose the compaintant’s information, people have stopped calling.

“That has had a chilling effect on code enforcement,” Romain said.