Congress members Tom Suozzi, Kathleen Rice, and Peter King to Serve as Hosts for 3/24 March for Our Lives Rally in Farmingdale. 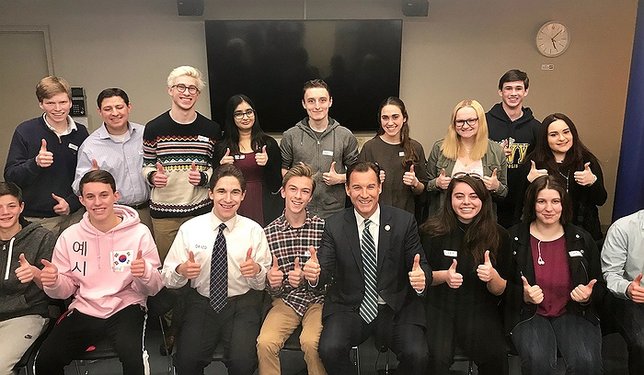 Congressman Tom Suozzi with the March for Our Lives student planning committee.

Glen Cove, NY - March 12, 2018 - Democrat Members of Congress Tom Suozzi (NY-3) , Kathleen Rice (NY-4) and Republican Peter King (NY-2) today announced the Student Planning Committee for the March for Our Lives Rally on March 24, 2018 that is being jointly hosted by the three Members of Congress in a show of unity and bipartisanship to demand action on common sense gun legislation.
“We are inspired by the teenagers and high school students who are standing up collectively and demanding ‘not one more,’ and we want to help them organize across Long Island and beyond. This is a young people’s movement and it’s our job as elected officials to shepherd this passion so meaningful action is taken at the congressional level to address gun violence prevention,” said Suozzi.
“I am proud of our young people who inspire me and Congressman Suozzi and they give me a renewed sense of effort to continue to advocate for policies that prevent gun violence and keep our communities and children safe,” said King.
Twenty-two high school students from schools in Baldwin and Lindenhurst to Hicksville and Syosset, as well as the Schechter School and several schools on the North Shore of Nassau met with Suozzi on Friday to discuss how they will get the word out about the rally to their peers, as well as decide the program and speakers for the rally.
“I am so impressed with the young people I met with on Friday. They have passion and conviction and inspiring ideas of the message they want to send to Washington,” said Suozzi. “I could not be happier about helping them to give voice to their concerns and the kind of country they want to live in.
“These are terrific kids and we should listen to them.”
"I am excited by the energy of these young people and will encourage them as they highlight the need for common sense gun reforms," said Rice.
The students, many meeting each other for the first time, decided to establish regular communications and to meet again on Friday, March 16, 2018.
“I am happy that Long Island has leaders in Congress who care enough about this issue to put their partisan differences aside and work with us to urge their colleagues in Washington to do something before another mass shooting occurs and more young people die needlessly,” said Andrew Goldman, Student Body President of Syosset High School.
“I am excited for our rally and I hope it will encourage our peers to attend and help us highlight to Congress how serious my friends and I are that we want to always feel safe when walking into our schools”
The March for Our Lives Rally will be held on Saturday, March 24, 2018 at 11:00 AM at the Nold Athletic Complex at Farmingdale State College 2350 Broadhollow Road Farmingdale, NY 11735.
Suozzi, King and Rice support H.R. 4240, the Public Safety and Second Amendment Rights Protection Act, which is being led by Congressman King and cosponsored by Congressman Suozzi. This bill would expand the existing background check system to include all commercials firearm sales, provide reasonable exceptions for family and friends, and preserve Second Amendment Rights. It would also offer states better federal funding if they maintain proper record-sharing systems that help report criminals and the dangerously mentally ill.