Javonne D. Mimms of West Babylon, 26, was arrested after crashing into a fence; a passenger exited the vehicle and fled on foot, according to reports. 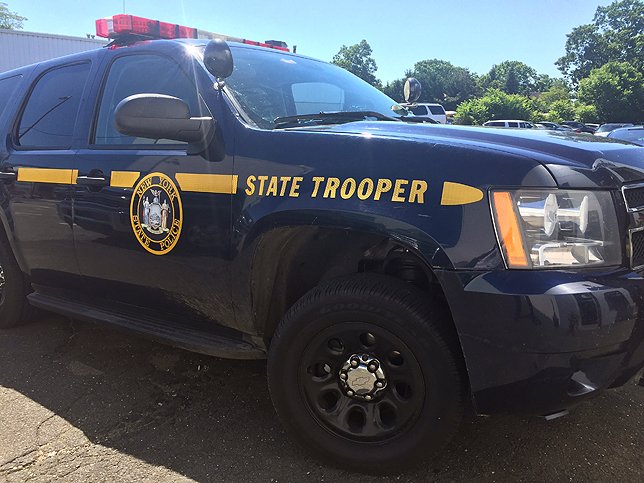 Long Island, NY - March 12, 2018 - On March 11, 2018, at approximately 4:36 am, Troopers observed a 2017 Chrysler traveling southbound on St. Rt. 110 in the area of the Southern State Parkway, in the Town of Babylon, operating at a high rate of speed. The Troopers followed the vehicle onto the Southern State Parkway eastbound. The Troopers attempted to initiate a vehicle and traffic stop, but the Chrysler failed to comply and began to flee eastbound on the Southern State Parkway.
The Troopers pursued the Chrysler to exit 37N onto Belmont Avenue. The vehicle turned off Belmont Avenue onto Pitcher St westbound then southbound on Govenor Avenue until it collided into a fence and trees on the corner of Govenor Avenue and Lakeway Drive. The driver exited the vehicle and attempted to flee on foot but was taken into custody without further incident. An unknown passenger exited the vehicle and fled on foot.
New York State Police and Suffolk County Police searched the area yielding no results. The driver was arrested and identified as Javonne D. Mimms, age 26, of West Babylon, NY. Javonne Mimms was charged with DWI, Unlawful Fleeing a Police Officer, Reckless Endangerment 2nd, Reckless driving and Resisting Arrest, and multiple Vehicle and Traffic Violations. Javonne Mimms will be lodged and arraigned at Suffolk County First District Court.
The State Police are requesting that anyone who may have information concerning this incident to please call (631) 756-3300.
A criminal charge is an accusation. A defendant is presumed innocent until and unless proven guilty.