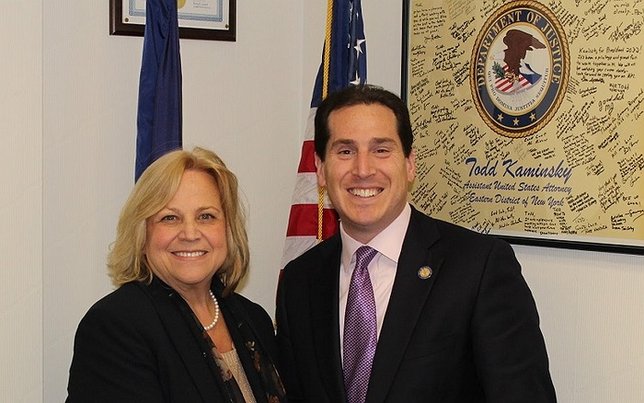 Rockville Centre, NY - March 9, 2017 - This week, State Senator Todd Kaminsky announced that Mary Lou Cancellieri, co-founder of RVC Blue Speaks, has been appointed to the New York State Autism Advisory Board. RVC Blue Speaks works with local, regional and national partners to spread awareness about autism and raise money for research. In light of her tireless advocacy on behalf of the special needs community, Kaminsky recommended Cancellieri for the appointment.

“I am proud to appoint Mary Lou, one of the most passionate and dedicated people I know, to the NYS Autism Advisory Board,” said Senator Todd Kaminsky. “Her passion is spreading awareness about autism, and I am excited to see her bring that dedication to the Board. Long Island needs a voice in this important arena, and I know that Mary Lou Cancellieri will fight for the entire region to be represented in statewide decisions concerning autism.”

“I would like to thank Senator Kaminsky and Governor Cuomo for this appointment on the New York State Autism Advisory Board. I look forward to supporting the families from the autism community on Long Island.” - Mary Lou Cancellieri

"I would like to thank Senator Kaminsky for his constant support and tireless work in our communities. There is no one more deserving of this appointment than Mary Lou Cancellieri. Mary Lou is a great advocate for autism awareness and I am certain that under her guidance New York State will be able to provide better services for those suffering from autism spectrum disorders and their families." - Alfonse D’Amato, former United States Senator

When one of their grandchildren was diagnosed as being on the autism spectrum, Mary Lou and her husband Tony worked with their children and local leaders to found RVC Blue Speaks. The organization runs fundraisers to raise money for Autism Speaks and its local Long Island Chapter. Starting in August 2016, they have already raised over $15,000 through community fundraising events, including a Jones Beach Walk and a Guest Bartending Night.

The Advisory Board will consist of 19 members and operate under the jurisdiction of the Office for People with Developmental Disabilities (“OPWDD”). The Board will be responsible for studying and reviewing the effectiveness of current services; identifying  legislative and regulatory changes necessary for improvements; and reviewing ways to improve coordination of services among the various state agencies serving the population.