National Weather Service: Winter Storm Quinn Set To Dump Up To 5 to 10 Inches of Snow on Long Island

Winter Storm Watch issued by NWS; storm due to hit our area from Tuesday evening into Wednesday evening, affecting commute. 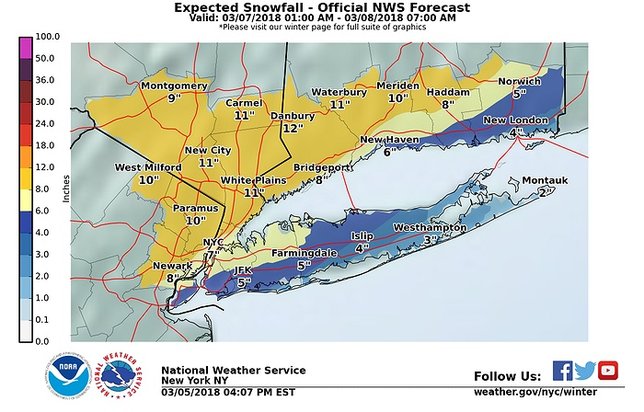 A map of the estimated snowfall totals as a result of Winter Storm Quinn, forecast to hit Long Island Tuesday night.

Long Island, NY - March 6, 2018 - With less than a month to go before spring, it’s likely more than a few Long Islanders were anticipating not seeing snow again for quite a while. Sadly, we were wrong, as the New York area is set to be hit by yet another nor’easter…and this one stands to be worse than the one we just got through in terms of the amount of precipitation, although winds and flooding are expected to be less overall.
According to the National Weather Service (NWS), Nassau and Queens Counties are forecast to receive anywhere from 5 to 10 inches of snow starting late Tuesday evening – with Suffolk also expected to be hit, although with less overall accumulation – courtesy of Winter Storm Quinn, which has been slowly making a cross-country trip before ending up at the U.S. east coast. The storm, due to begin hitting the Long Island region Tuesday night and continuing throughout the evening and well into Wednesday, will likely bring with it heavy snow and strong winds – sustained winds at 20-30 MPH, with gusts up to 40 MPH – resulting in potentially dangerous travel conditions, tree damage and power outages, the NWS said. 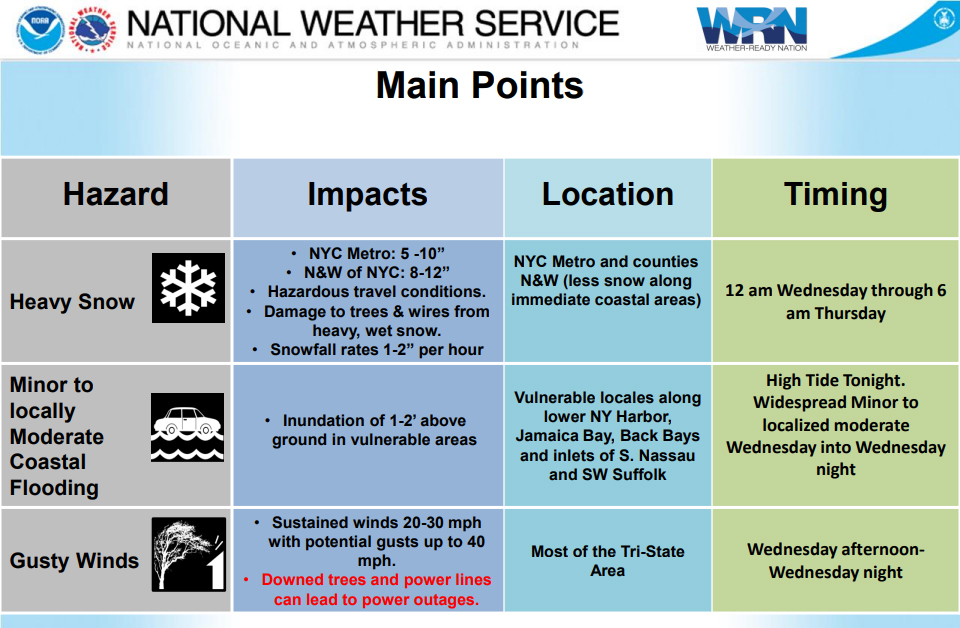 Photo Credit: National Weather Service
According to current forecasts, precipitation from Quinn should begin late Tuesday night in the form of a mixture of rain and snow and continuing as such before changing over to wet snow by Wednesday afternoon; however, depending on the track and strength of the low, the changeover to pure snow could come sooner in the day. Regardless, the Wednesday evening commute stands to be seriously impacted – significant reductions in visibility are possible when driving – and residents are urged to take caution when traveling during the storm, and to stay home if possible.
According to the NWS, the strength of the winds and degree of coastal flooding from Quinn will not rise to the level of the nor’easter Long Island saw last weekend, although those issues will still be a factor, albeit to a lesser degree. Coastal regions are expected to have a higher degree of probability for snow accumulation, with gusts of wind creating the potential for tree damage and downed power lines. Residents are advised to prepare for possible power outages with blankets, flashlights, non-perishable food, water, and battery operated radios for storm and news updates.
There are still over 100 customers who are without power due to last week’s storm; experts are anticipating Quinn to possibly interfere with power restoration efforts, in addition to creating additional power outages. To report and receive status updates on an outage from PSEG Long Island, residents can text OUT to PSEGLI (773454) or to report an outage online, visit www.psegliny.com.
The complete, day-by-day forecast for Tuesday through Wednesday is as follows: