Seeding points are issued to athletes based on their age eligibility to compete in the following season. Therefore, competitors moving up a category cannot receive seeding points for the division they are leaving.

Jett Arp, Zachary DiGregorio, Maya Chan and Sophie Kirkby captured their respective first day seeding events. With those two runs, they also had the lead at the midpoint of the 2017 Norton title chases.

While Arp and DiGregorio didn’t win their respective second day seeding races, they stored enough of an advantage from Friday to take four-heat national victories in the three-race series.

Ian Thomas, of Park City, Utah, won the second Youth B seeding race handily over Arp, who led after one heat Saturday. But Thomas stormed back in the final run for the victory. Arp, of Burlington, Vt., built up a substantial advantage through three runs from start four (curve nine) to take the Norton crown in a combined 3 minutes, 05.964 seconds.

“My first run (today) was okay, but the second run, (curves) eight-nine-10 weren’t as clean as I’d have liked,” said Arp. “That could have been better, but still got the trophy overall which was nice.”

Thomas was second in the four-heat national chase in 3:07.440, while Matt Greiner, also of Park City, finished third in 3:08.891 after holding the opening run lead on Friday.

Sean Hollander, of Lake Placid, third in the opening Youth A seeding race, came back in the second seeding event to defeat DiGregorio, of Medway, Mass. DiGregorio, too, had enough time in reserve from day one to claim the Norton championship as the Youth A men went up to the higher start three, entering the track at curve four.

The winner’s two-day total of 3:00.646 was ample. He had the fastest time in three of the four runs, although he found it difficult sleeping on the lead.

“Definitely staying in that first position overnight was a lot to think about,” said DiGregorio. “Coming back today, the first run wasn’t as good as I wanted, so I knew I was going to have to fight Sean and try to beat him out on that fourth run. So it really came down to that last run. But happy to be here and happy to have gotten the win.” 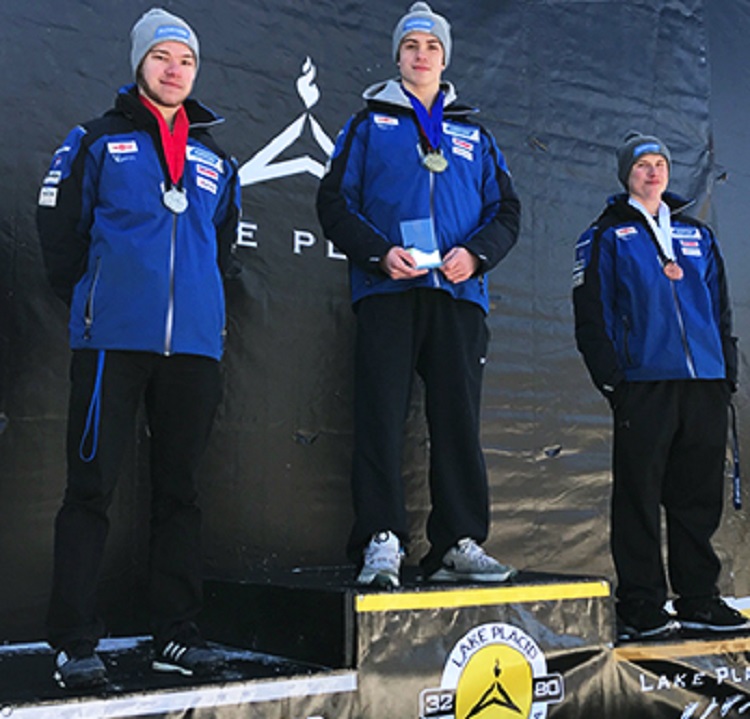 Chan and Kirkby swept the three competitions, each putting down the four best heats of their respective races.

Chan, of Chicago, collected her first Norton championship. Her second seeding race time of 1:34.793 finished a combined 3:09.034 in Youth B from the lower starting point.

“I feel really good. It’s my first time placing at nationals,” remarked Chan. “In the first run, my start was a little bit off. I nearly hit the wall. I was skidding in (curve) nine, but my second run was a lot better.”

Kirkby, from five miles away in Ray Brook, N.Y., cruised to victory Saturday in the last seeding event and the Norton race. Her two final runs registered 1:29.965, leading to four heats of 2:59.298 from women’s and doubles World Cup start three.

As did Chan, Kirkby ran off four consecutive best heats.

“I definitely love the advantage that this is my home track,” commented Kirkby. “Coming back from Europe, all these hard tracks that I’ve been racing on. Just to come home to something that I’m used to definitely helped me out with strategizing with my runs. Just some simple mind runs to help me clear up and be focused for the race.”

As the USA Luge youth season ends, the coming week will turn attention to the juniors, who likewise will race a pair of seeding races and the Norton Junior National Championships on March 11-12 at Mount Van Hoevenberg.

Daily start times are 9 AM EST, with live streaming at www.usaluge.org.

Women’s favorite Brittney Arndt, of Park City, who won all three events here last March, is sidelined with a knee injury and will not compete. However, Ashley Farquharson, also of Park City, is leaving the youth ranks and will race in the junior division next weekend.

Farquharson did not race in these Lake Placid youth events. She finished the recent Youth World Cup season third overall.

For complete results and interviews, please log on here