Governor Cuomo announced the launch of the “New York-Israel Commission,” which will be responsible for creating a framework to strengthen economic and cultural ties between New York and Israel. 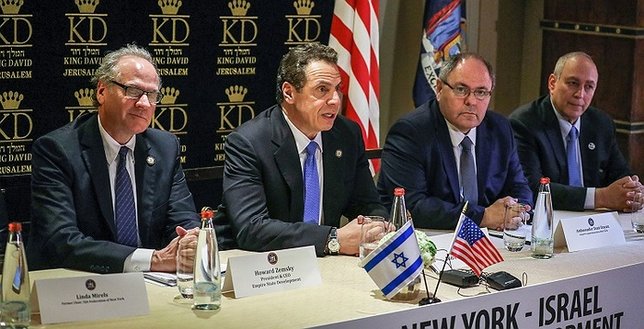 Albany, NY - March 5, 2017 - Governor Andrew M. Cuomo today announced the launch of the “New York-Israel Commission,” which will be responsible for creating a framework to strengthen economic and cultural ties between New York and Israel. Mort Zuckerman will serve as honorary chair of the 22-member commission and Allen Faigin, Malcolm Hoenlein, Linda Mirels, and President, CEO & Commissioner of ESD Howard Zemsky will serve as co-chairs. The Governor made the announcement during his economic development and unity trip to Israel following a meeting with Nir Barkat, the Mayor of Jerusalem and key international business leaders at the King David Hotel. 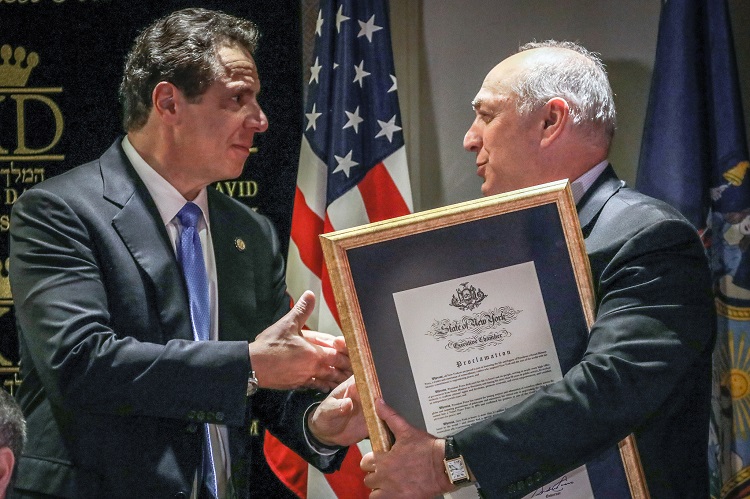 “New York and Israel have always shared a deep cultural, social and economic bond and I am proud that we are working to make our partnership stronger than ever before,” Governor Cuomo said. “These individuals will help continue to strengthen our relationship with the Jewish community and reaffirm our commitment to Israel, and I look forward to seeing the impacts of this partnership resonate across the state and the globe for years to come.”

Co-Chair Malcolm Hoenlein said, "I am pleased to co-chair Governor Cuomo's New York-Israel Commission. This trip is an important step in exploring new ways we can continue to grow and expand the strong ties that exist between New York and Israel. Under Governor Cuomo, New York has shown its unwavering commitment to the Jewish community and this initiative will continue to strengthen both our cultural and economic ties and ensure both partners will grow together well into the future."

Co-Chair Linda Mirels said, “New York and Israel are more than just major economic partners – we share a bond that transcends borders. The New York-Israel Commission will work to strengthen the ties that bind us, as well as open new doors to economic growth, expand cultural exchanges and ensure our best and brightest continue to advance cutting-edge research and technology. I thank Governor Cuomo for his strong partnership over many years, and I look forward to driving new growth and opportunity for our next generation of Israelis and New Yorkers.”

Co-Chair Allen Faigin said, “The positive impact of New York’s strong relationship with Israel on each of our economies is abundantly clear – from exports to imports to jobs. Through the launch of the New York-Israel Commission, Governor Cuomo is once again working to deliver results for our two global powerhouses by further strengthening our economic ties. I applaud the Governor for this leadership during this time of need, and look forward to working together to benefit our communities and set a global example for international cooperation.”

The Commission is made up of the following individuals:

The New York-Israel Commission will work to promote and create opportunities to develop new programs and economic partnerships that celebrate the relationship between New York and the Jewish community. Members of the Commission will be responsible for proposing initiatives to create programs and launch educational and cultural exchanges that meet the goals outlined below to strengthen the partnership between New York State and Israel in several key areas.

Israel is a leader in the global tech sector and home to some of the world’s most innovative and rapidly growing businesses. It currently ranks fifth among the most innovative countries in the world according to the Bloomberg innovation index, and its high-tech sector attracted $4.43 billion in investment during 2015.

Israel is also an important trade partner for New York and is the top fifth export market for New York State products. In 2016, commodities exported from New York to Israel generated $4.89 billion of economic activity. Top exports from New York to Israel include precious metals and stones, including diamonds, aircraft components and industrial and electric machinery. Top New York State imports from Israel include precious metals and stones, pharmaceutical products, electric machinery, such as television equipment, and plastics.

New York and Israel face similar security challenges, including the threat of terrorism. The Commission will support opportunities for both governments to share best practices and benefit from each other’s experience. By connecting New York law enforcement with their Israeli counterparts, the Commission will help New York learn from one of the world’s leaders in counter-terrorism operations. Additionally, the Commission can support a conversation on division and anti-Semitism to ensure that both governments are doing everything they can to fight intolerance and crack down on hate crimes.

New York and Israel share deep cultural bonds that transcend borders. Working with partners already engaged in exchanges between both countries, the Commission will spearhead cultural exchanges for Israeli and New York students to learn about each other’s rich cultural heritages. The Commission will also support a fellowship program for Israeli students and future leaders to visit New York and meet with prominent New Yorkers across industries and sectors. To celebrate New York’s rapidly growing Israeli food scene, the Commission will host an Israeli food festival and partner with the Taste NY initiative to bring local and international chefs around Israeli cuisine.

In 2014, Governor Cuomo launched the Global NY initiative to offer one-stop shopping to both foreign businesses looking to invest in New York and to local businesses that want to export their products globally. Global NY currently has a trade office in Israel.

Empire State Development maintains close ties with its Israeli counterparts, working cooperatively with the Israel Economic Mission in New York City, and with the America-Israel Chamber of Commerce. Such interactions promote the interest of New York-based companies in the Israeli marketplace, foster cooperation between New York and Israeli companies and institutions and help promote initiatives in specific areas of mutual interest such as, nanotechnology, alternative energy, biotechnology.

Over the past two years, the state has organized the following trade missions between New York and Israel:

In 2015, Empire State Development supported 15 New York diamond and jewelry companies during International Diamond Week at the Israel Diamond Center. The participants reported increased export sales of $3.2 million as a result of their participation at the show, with an additional $2.4 million sales anticipated over the following two years.

In February 2016 and February 2017, Empire State Development supported 10 companies each time on a trade mission to Israel through the Brooklyn Chamber of Commerce. Individual meetings for the participants resulted in export sales of $1.8 million.

The Governor’s New York-Israel commission will build on these and other economic and educational partnerships that exist between businesses in New York and Israel and expand the reach of the Global NY initiative.

The Governor launched the creation of the commission while on his economic development and unity trip to Israel. The trip's goal is to strengthen economic ties with Israel and support the Governor's efforts to create new jobs and attract additional international business investment in New York through the Global NY initiative. The trip reinforces the historic relationship between New York and Israel and is part of the state’s ongoing efforts to combat anti-Semitism. The Governor departed for Israel on Saturday, March 4 and will return Monday, March 6. More information on the Governor’s itinerary is available here.