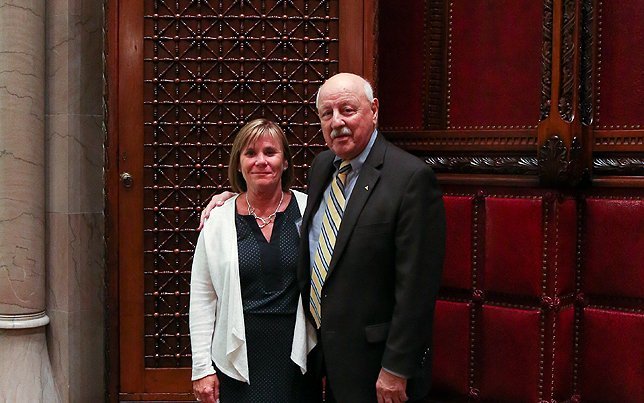 Senator Ken LaValle with Paulette Ofrias of Southold, who was selected as last year's NY State Senate’s Woman of Distinction from the First Senate District.

Long Island, NY - February 28, 2018 - Senator Ken LaValle is requesting nominations for a woman to be recognized as a NY State Senate First District’s “Woman of Distinction”. Residents of the Senate District are encouraged to nominate friends, spouses, coworkers and neighborhood leaders who have performed outstanding work on behalf of their communities.
“Once a year, this program provides us with a special opportunity to honor extraordinary women for their achievements. I am proud that we have many deserving women in the area I represent. I look forward to reviewing the accomplishments of all of the nominees.” Senator LaValle said.
The Senate will honor a distinguished woman from our area and throughout the state at a ceremony on Tuesday, May 1st in Albany. Each honoree’s photograph and biography will become part of a special exhibit proclaiming the contributions of these exemplary New York women. Senator LaValle’s nominee will be invited to join other distinguished individuals from across New York State with a special reception and ceremony in the Legislative Office Building in Albany. To nominate, go to http://www.nysenate.gov/senator/kenneth-p-lavalle and click the “Women of Distinction” icon get to the online application. The deadline for entries is Friday, March 23th.
Previous winners in the annual event have included leading women from the world of business, academics and civic life, as well as those who have performed heroic or selfless acts, made significant discoveries or provided examples of personal excellence against difficult odds.