With Congress in recess, Congressman Tom Suozzi wrapped up an important district work period by meeting with constituents and local organizations as he continues to focus on his top priorities in NY's Third Congressional district. 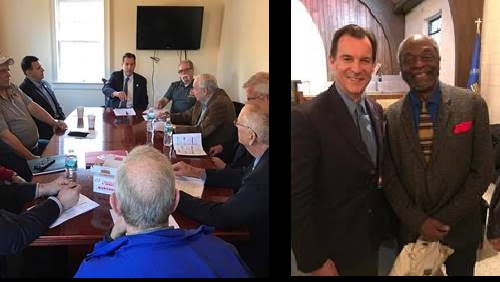 Washington, DC - February 27, 2017 - With Congress in recess, Congressman Tom Suozzi (D – Queens, Long Island) wrapped up an important district work period by meeting with constituents and local organizations as he continues to focus on his top priorities in New York's Third Congressional district.

Following through on his pledge to support local veterans, Congressman Suozzi convened his first meeting with his newly formed Veterans Advisory Committee. The committee’s purpose is to ensure that veterans who have served their nation are able to lives out their lives with dignity and respect.

“We discussed four major topics during this meeting: 1) Making sure veterans are able to transition from military life to civilian life, which includes helping them find good-paying jobs. 2) Providing them with quality housing so no veteran is left without a place to stay. 3) Ensuring they have access to the best mental health care services available in order to combat post-traumatic stress disorder (PTSD). 4) My support for the Blue Water Navy Vietnam Veterans Act (H.R. 299), a bill that would expand benefits for service members exposed to Agent Orange during the war. We’re off to a good start and it was the first of what I know will be many productive meetings to come.”

“Folks living on Queens and Long Island have a right to live in peace and quiet, and I’m going to keep working hard to make that happen,” said Suozzi. He continued, “By coming together and exchanging ideas, I believe we’re going to keep moving in the right direction.”

In keeping with his commitment to bring people together to help clean up the Bethpage Plume, Congressman Suozzi met with Philip Greco, who worked at the Environmental Protection Agency (EPA) for over 40 years in a variety of roles, including as an acting section chief. Greco will serve as a technical consultant to Congressman Suozzi and his staff on the Bethpage Plume.

“I said from the very beginning that I would try and bring all local stakeholders together to solve this problem affecting thousands of people in our community. Philip’s insight and knowledge of environmental issues will be a big help in trying to move forward to clean up this mess.”

Congressman Suozzi also met with scientists, students and staff at Cold Spring Harbor Laboratory, an internationally renowned research institution with achievements in molecular biology and genetics. Topics of discussion included the adverse effect President Trump’s travel ban is having on students at Cold Spring Harbor and around the world.

“There are students at Cold Spring Harbor who are having to choose between continuing their careers here in the U.S. or going back to their home country. President Trump’s discriminatory travel ban is literally driving the best minds science has to offer away from our nation. It’s just another reason why the travel ban is making our country weaker, not stronger,” said Suozzi.

On Sunday, Congressman Suozzi spoke at the Black History Month Celebration, hosted by the Huntington Chapter of the National Council of Negro Women at the Bethany Presbyterian Church in Huntington Station.

“It is truly an honor to serve at this important time in history,” said Suozzi. “While we have made progress as a nation in the fight for equal rights, it’s clear that we still have a lot more work to do.”

“Nothing is more important to me than making sure that we improve the quality of life in our neighborhoods,” said Suozzi.

Congressman Suozzi represents New York’s third congressional district. He serves on the House Foreign Affairs Committee and the House Armed Services Committee. He is Vice-Chair of the Problem Solvers Caucus.