A 16-year old teenage girl has been missing since Monday. She disappeared without medication she must take for anemia. Police, family and friends are desperately seeking information about her whereabouts. 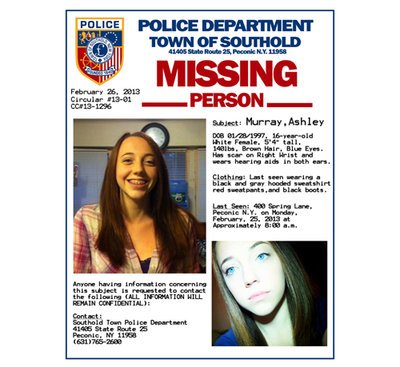 Ashley Murray, a 16-year old teenage girl, has been missing since Monday. On Wednesday, Southold Police issued a Missing Person poster for Murray.

Police and Murray’s family and friends are desperately seeking for her safe arrival home. She was last seen at 8:30 a.m. on Monday leaving her home for a ride on the school bus to Southold High School where she attends as a sophomore, but she never made it to school.

Murray does not appear to have been abducted. It appears she was upset and was having thoughts of committing suicide.

Murray had left behind what her family has called a suicide note. It read, “I will be dead by the time you read this.” It also made reference to a “watery grave” and a stranger “taking her to a deep abyss.”  Some of her classmates also received text messages from Murray stating that she would kill herself, which was reported to school officials.

Murray’s friends and her Facebook updates prior to her disappearance also noted she was unhappy, but no one realized the degree of unhappiness she was facing and that it would lead her to thoughts of suicide. Friends have mentioned she had been bullied about her physical appearance and sexual orientation.

Since Murray’s disappearance, police have searched by air and on the ground by canine unit. Police have also focused on examining Murray’s phone and computer records as well as interviewing close friends and family. There’s also been grassroots efforts and a Facebook page set up by friends and family to find the missing teen.

Police, friends and family are looking for information to help find the missing teen described as 5'4" tall and 140 pounds with reddish-brown hair and blue eyes. She was last seen wearing red sweatpants, black boots and a black and gray zip-up sweatshirt with a hood. Murray also wears hearing aids in both ears. Murray’s mother also indicated she left without medication she must take for anemia.

Anyone with information is asked to contact Southold Police at (631) 765-2600. Information remains confidential.