The USA Luge doubles team of Matt Mortensen and Jayson Terdiman concluded the Viessmann World Cup season Saturday with a silver medal in Altenberg, Germany and finished in third place in the overall tour standings. 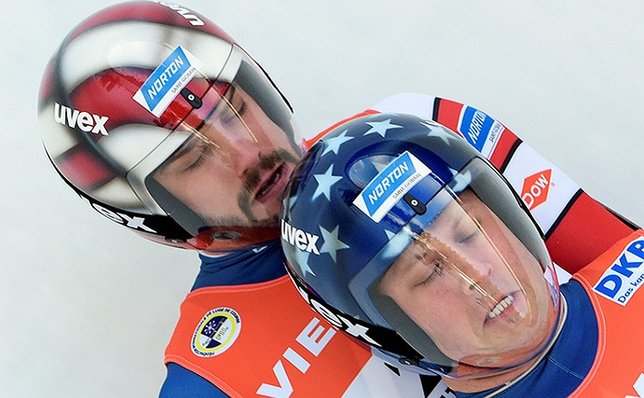 Altenberg, Germany - February 25, 2017 - The USA Luge doubles team of Matt Mortensen and Jayson Terdiman concluded the Viessmann World Cup season Saturday with a silver medal in Altenberg, Germany and finished in third place in the overall tour standings. It was the third medal (two silver, one bronze) in their third season together.

The USA’s Tucker West eyed the podium, before settling for fourth place on a track where he has little experience.

The American doubles were third after one heat, behind Germans Robin Geueke and David Gamm who were also ahead of them in the season-long standings. Mortensen and Terdiman put down the second fastest final heat to overtake Geueke and Gamm in the race and in the rankings by merely three World Cup points.

“I'm still in disbelief. Just incredible. There were not too many things that could have happened today to change the overall ranking in our favor,” said Mortensen, of Huntington Station, N.Y.

“For me, it (the achievement) meant a lot. My grandmother passed away a few days ago. I was really close with her, and I can’t make it home for the wake or the funeral. I have to be here and give Jayson his shot at doing well and hopefully help the team out tomorrow (team relay) to do well again. So there was just a lot of conflict for me these past couple of days and I’m really happy things turned out the way they did. I think she was watching us today.”

The American team put down a pair of consistent runs to total 1 minute, 24.126 seconds. When Geuke and Gamm went wide around the start curve and kissed a wall out of turn nine, the door opened to second place for Mortensen and Terdiman and third place in the final standings.

With the top three final ranking, Mortensen and Terdiman have qualified for the fall 2017 World Cup team. This is the first step toward 2018 Olympic team nomination.

Fellow Germans Toni Eggert and Sascha Benecken capped a brilliant season that saw them take nine of 12 events, as the nation has now won 20 straight World Cup doubles competitions. Geuke and Gamm were the bronze medalists. The third German doubles team of Tobias Wendl and Tobias Arlt, Olympic and World Champions struggled mightily in the start of the first heat, and were never in contention, although they completed the World Cup campaign in second place.

“Today was crazy, awesome, hectic, stressful and pure happiness all rolled into one,” said Terdiman, of Berwick, Pa. “This season for Matt and I has been incredible. We’ve been one of the most consistent sleds on tour. Being 12 points behind in the overall for a podium and knowing that we had to get silver and they had to get bronze for it to work out for us and then actually doing that was amazing. This is by far my favorite medal I’ve ever earned. It’s the second time I’ve medaled in Germany, but this one means that much more to me because of the implications that it had on the overall, and the mental ability that Matt and I showed to come from behind, technically, to get the job done to make everything happen.”

After the U.S. celebration subsided under the Altenberg sun, Mortensen reflected on the effort.

“The only real thing we could have done was medal in front of Geuke and Gamm and it happened. I can't believe it. Mentally, I thought it was near impossible to regain third overall and I guess that took a lot of pressure off. I set up the sled as risky as possible because we had nothing to lose. We were guaranteed fourth anyway. I am so happy it worked in our favor today. I couldn't be happier with our result. That was real bite-your-fingernails racing, down to the last run of the season.”

It was a day in which experience mattered, as temps during training were spring-like, with times running the gamut. However, race day broke clear and colder.

It was the best USA Luge doubles effort of the season, with all three sleds in the top 12. Jake Hyrns and Anthony Espinoza had a career best sixth place effort, with Justin Krewson and Andrew Sherk 12th.

The former team has come to life in the closing weeks of the season. Hyrns, of Muskegon, Mich., and Espinoza, of Park City, Utah, were ninth last week in Pyeongchang. They were runners-up in Friday’s Nations Cup qualifying, and continued the momentum in Altenberg.

“Going to Pyeongchang was a good way to clear our minds,” stated Espinoza, of Park City, Utah. “It was a track really no one had known about. We could take it as we wanted to, as we thought about it. We clicked with it so well and it boosted our confidence and we carried that momentum into this week. We love Altenberg so sliding here was a complete breeze.”

“We knew the track wasn’t in the greatest condition and we knew we definitely had a whole lot more time to gain down the track,” added Hyrns, of Muskegon, Mich. “When two runs are put together really well like it worked out for us today, it adds up to what happened for us.

“I just told my mother-in-law, this is the kind of morale boost that I needed in order to feel good going into the off season, knowing we can potentially go even faster since we have the whole summer to work on our physical abilities, and working into next year, building on our sliding ability from the end of this year.”

Krewson, of Eastport, N.Y., and Sherk, of Fort Washington, Pa., finished 12th, one second behind Eggert and Benecken. The U.S. duo were 16th in the final standings, collecting 302 points.

“Today was a good race all around,” stated the 21-year-old West, finishing the year with 535 points. “In the first run I had a little tap on the start and cut it a little too close on the left wall. In the second run I cleaned that up but unfortunately took a little bit of the wall out of curve 10. I’m incredibly grateful to hold on to my spot. All around I can’t be mad at the fourth place. It can sting sometimes, but this is my best finish by far in Altenberg. I’m making improvements on these tracks that I don’t have quite as much experience on. So all in all, I’m excited about today’s race.”

The event saw the young Russian Rocket, Roman Repilov, set a track record 53.452 in the second heat en route to his third victory of the year and the overall World Cup title. The 20-year-old two-time World Junior Champion lead the tour with three individual wins and a total of 845 points.

Germany’s Felix Loch was second on the day, 0.46 of a second from the winner, and runner-up overall with 748. Austrian Wolfgang Kindl, who won the sprint and singles World Championships last month, finished seventh Saturday after a poor first run start, and took third on the campaign at 700 World Cup points.

West’s teammate Taylor Morris, of South Jordan, Utah, was in 14th place and 16th in the World Cup; Chris Mazdzer, of Saranac Lake, N.Y., tied for 20th on the day and 11th on the season; and John Fennell, of Calgary, was 27th Saturday and 43rd in the final standings as he only raced in three events. Jonny Gustafson, of Massena, N.Y., did not qualify in the Nations Cup. The first-year World Cup luger finished 30th in the World Cup.

The final day of the World Cup season takes place Sunday when Altenberg hosts women’s singles beginning at 3:30 AM EST, followed by the Team Relay, presented by BMW.

This is where a veritable dog fight will take place for second and third places overall. The U.S., Canada, Russia, Austria and Latvia are all separated by just five World Cup points. Germany clinched the title last week in Pyeongchang.