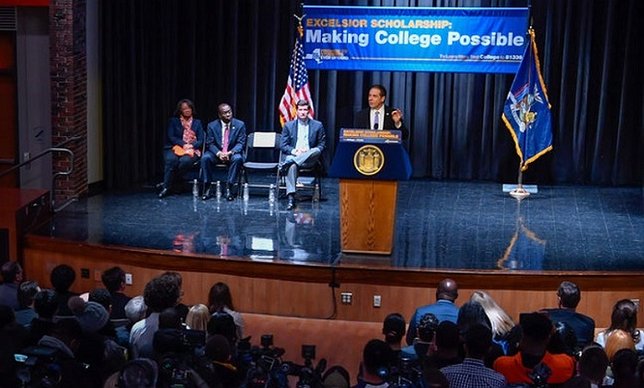 Nearly 80% or more than 940,000 families across NY would qualify for tuition-free college at SUNY and CUNY under Governor's proposal.

Albany, NY - February 27, 2017 - Governor Andrew M. Cuomo today announced that members of the New York Democratic Congressional Delegation endorsed his first-in-the-nation plan to make college tuition-free for New York’s working- and middle-class families. The Excelsior Scholarship would make college possible for families making up to $125,000 per year, helping to alleviate the crushing burden of student debt while enabling thousands of bright young students to realize their dream of higher education at SUNY and CUNY. Under the Governor’s bold proposal, approximately 80 percent or more than 940,000 New York families would qualify to attend SUNY or CUNY two- and four-year colleges tuition-free.

"With a college education now a requirement to succeed in the modern workforce, the strength of our economy depends on our ability to help more New Yorkers go to college, and I am proud to have the support of these great New York leaders in our fight to make college tuition free for the middle class," Governor Cuomo said. "The Excelsior Scholarship will enable thousands of students to receive a college education, and help ensure New York and its economic future continue to go ever upward.”

The following Congressional leaders have endorsed the Governor’s bold proposal to make college tuition free for middle-class families making up to $125,000 per year in New York State:

The Excelsior scholarship aims to change that, saving students time and money by reducing their overall debt burden. The plan also recognizes there may be circumstances outside students' control, which is why the proposal includes a “stepping out” provision so that students will be able to pause and restart the program if life gets in the way.

Congressman Eliot Engel said, “Today, more and more jobs require a college degree, and college graduates earn more over their lifetimes than high school graduates. But at the same time, the costs of college and the burden of exorbitant student debt has never been higher. That is why Governor Cuomo’s college affordability plan is so important. If we fail to make college affordable, we fail to provide young Americans with the opportunities they deserve. I applaud the Governor’s efforts to put college within reach for hardworking New York families.”

Congresswoman Nita M. Lowey said, “Affordable, quality higher education is critical so that today’s students can succeed in a 21st century economy. We must continue working at all levels of government to ensure that a higher education is within reach for every student.”

Congressman José E. Serrano said, “Everyone deserves a fair chance at the American dream and access to affordable higher education is crucial to our young generations’ future success. The Excelsior Scholarship program is an unprecedented and ambitious effort to help ensure every New York undergraduate student, regardless of their family’s economic background, has the opportunity to access quality education for free. Working families now won’t have to consider foregoing sending their kids to college or sacrificing their short and long term financial stability to do so. I applaud Governor Cuomo’s leadership on this issue by setting up a program to help ensure access to quality education for all that serves as a model for other states.”

Congressman Jerrold Nadler said, “Making college affordable for middle class families is central to putting young people on the path to financial stability and keeping New York State’s economy strong. I am proud to support the Governor’s Excelsior Scholarship and applaud his efforts to make public college free for over 900,000 New York families.”

Congresswoman Carolyn B. Maloney said, “A college education is key for the good-paying, middle class jobs of today and tomorrow. I’ve pushed for Community College for All in Congress, and am pleased that Governor Cuomo is leading the way with the Excelsior Scholarship to pave the way to a brighter future for nearly a million New York families.”

Congresswoman Nydia M. Velázquez said, “Access to a quality education can unlock doors of opportunity and this program will empower more New Yorkers to purse a college diploma. I applaud the Governor for pushing this initiative forward and will continue working at the federal level to make education more affordable for working families.”

Congressman Joe Crowley said, “We all know that investing in the education of future generations is the only way to ensure a bright economic future for New Yorkers and Americans across our country. At a time when obtaining a college degree is absolutely critical to competing in a 21st century economy, we literally cannot afford to sit idly by as the burden of student debt crushes the futures of so many of our youth. I applaud Governor Cuomo for leading the charge to ensure middle-class New Yorkers have the opportunity for a tuition-free higher education and the chance to build a better life for themselves and their families.”

Congressman Brian Higgins said, “For struggling families, the affordability of a college education remains a serious challenge. Providing more and better college tuition assistance for middle class families is an important step in our knowledge-based economy.”

Congresswoman Yvette D. Clarke said, “The Excelsior Scholarship, the first of its kind in the nation, will make college tuition-free for thousands of students wanting to go to college. This much needed program will alleviate the crushing burden of student debt for young people and their families. I thank Governor Cuomo for his leadership on this very important issue.”

Congressman Paul Tonko said, “Increasing access to higher education is one of the best investments we can make in our workforce and our communities. Skills and knowledge create opportunities for higher wages for hard working individuals and their families. Education can open doors to small business development, job growth and a new era of inventors and entrepreneurs. And it can drive cutting edge research and a modern economy that will keep New York competitive. I applaud Governor Cuomo for his leadership and foresight on this issue. We need to ensure tomorrow’s leaders have the tools they need to be successful.”

Congressman Sean Patrick Maloney said, “When I was growing up, my parents sent five kids to college on one income – today, families can’t even send one kid to college on two incomes. Even if someone is lucky enough to graduate, they’re stuck paying off crazy loans for the rest of their life. Governor Cuomo’s plan - making college affordable or tuition-free --  is one of the best things we can do to ensure people can go to school and get good paying jobs when they graduate.”

Congresswoman Grace Meng said, “I applaud Governor Cuomo’s bold proposal to make SUNY and CUNY tuition-free. The plan would help more middle class students lay the foundation for achieving the American Dream and I’m proud to support the governor’s historic effort. A college education must be within reach for all of New York’s students!”

Congressman Adriano Espaillat said, "I commend Governor Cuomo for his visionary approach to making college accessible for all New York students who desire to achieve. The Excelsior Scholarship is the first of its kind in the nation and offers a tuition-free college education for middle class families. This proposal is a step in the right direction and creates a gateway of opportunity to help hundreds of thousands of students realize their dreams and achieve their full potential."

Congressman Thomas Suozzi said, “Governor Cuomo has put forward a nation-leading plan to make college possible for hundreds of thousands of New York’s working- and middle-class families. By significantly increasing college access and affordability, we are setting generations of strivers up for success. For too long, the heavy burden of student debt has prevented New Yorkers from reaching their full potential – and with Governor Cuomo’s smart proposal, we are changing that once and for all. I commend the Governor for his leadership on this issue, and look forward to working together to realize more students’ dreams of higher education.”