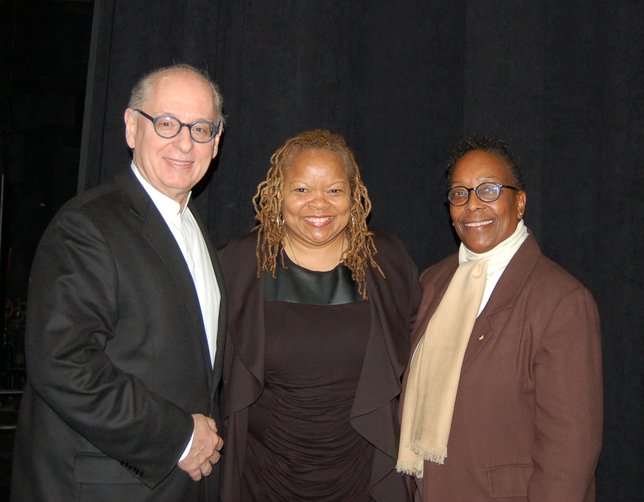 Garden City, NY - February 25th, 2015 - During Black History Month we are reminded of the great contributions of leaders like Rev. Dr. Martin Luther King, Jr., Supreme Court Justice Thurgood Marshall, and Rosa Parks. But rarely do we hear of Daisy Bates: a powerhouse of a woman who was the driving force behind school integration in Little Rock, Arkansas.

Daisy Bates is now a permanent part of our history thanks to Sharon La Cruise, who graduated from Adelphi University in 1984. La Cruise spent seven years writing, directing, and producing a feature length documentary film entitled Daisy Bates: First Lady of Little Rock, which chronicles the life of this fascinating but often forgotten woman. La Cruise accepted an invitation from President Robert A. Scott to screen her film at Adelphi on February 10, 2015.

Students, faculty, and staff from departments throughout the University came to view the film, learning about a woman at the front lines of the Civil Rights Movement that was dominated by men. Fueled by her anger from childhood experiences with racism, Daisy Bates became president of the Arkansas chapter of the NAACP and mentor and organizer to the Little Rock Nine, the first black students to attend Little Rock’s all-white high school.

Daisy’s story resonated deeply with the audience for many reasons. Sam L Grogg, dean of the College of Arts and Sciences, reflected on the relevance of Daisy’s story to recent events, “History is always a great teacher, and it is especially so in recent times.”

Terry Ann Joseph, a residence hall director, was amazed at the strength Daisy seemed to always show. “But it had to have been an act,” she said. “Dealing with all the criticism, racism, and even sexism must have been hard on her.”

The film was many audience members’ first encounter with Daisy Bates. “I remember having an entire unit on Martin Luther King, Jr. in high school, but I was never taught about the passion Daisy Bates had for the same fight for equality,” said Rochile Khan, a freshman biochemistry major.

La Cruise also had never learned about Daisy Bates, despite majoring in history. She first read about Daisy in a coffee table book and was immediately inspired. “Something about Daisy really captured me,” she said. “I felt that her story needed to be told.”