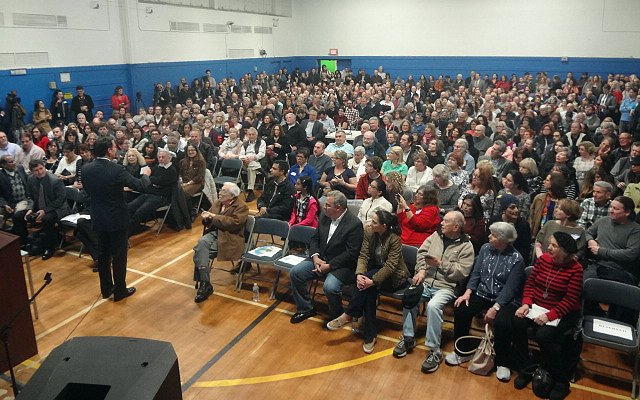 The Mid-Island Y JCC in Plainview was recently host to a town hall-style meeting put on by District 3 Congressman Tom Suozzi.

The Mid-Island Y JCC on Manetto Hill Road in Plainview was recently host to a passionate town hall-style meeting put on by Democratic Congressman of New York's 3rd District and former Nassau County Executive, Tom Suozzi, currently the only elected official on Long Island to do so in the wake of other such meetings being held nationwide between lawmakers and their constituents. 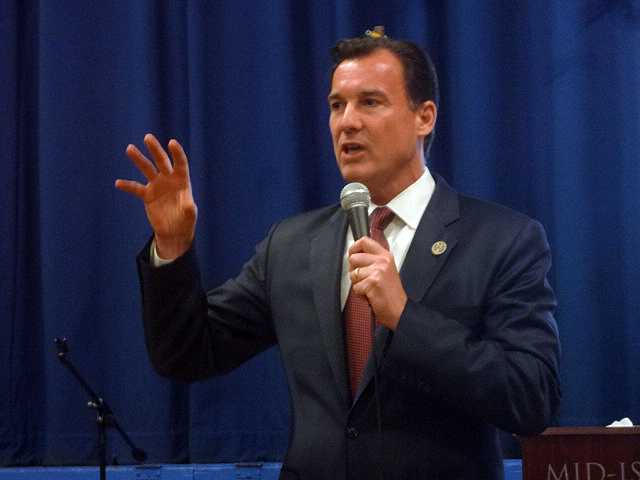 Suozzi noted that there are 20 million people who currently receive health insurance through the Affordable Care Act that didn't receive it before. Photo Credit: Chris Boyle.

Gaining widespread coverage on cable television news, Republican congressmen and senators have been besieged by angry members of the public at town hall meetings over grievances in regards to the controversial policies of President Donald J. Trump and his administration, such as his promises to “repeal and replace” the Affordable Care Act and to come down hard on illegal immigration, among others. White House spokesmen have blamed part of the unrest at these meetings on alleged paid protestors and political activists, whereas others dispute those claims, maintaining that grassroots movement is taking place amongst the public to make their voices heard. 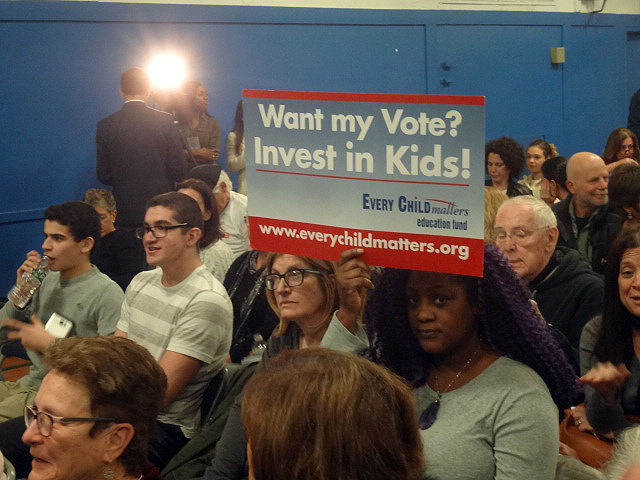 Suozzi said that he appreciated the steadfast commitment of those who attended the town hall meeting to making their country a better place. Photo Credit: Chris Boyle

The tone at Suozzi’s town hall, held at 7pm on Feb. 23 to an auditorium so packed with hundreds and hundreds attendees that they overflowed out into the hall, was noticeably more amicable, due to Suozzi and the crowd being essentially on the same page regarding their mutual concerns in Washington, albeit with a few notable exceptions as the evening wore on. However, the passion of the public was still very much on display, proving that despite how one may or may not feel about Donald Trump, the 45th President absolutely has been responsible for more people getting politically active than many figures in recent history; such engagement, Suozzi noted, is vital in making the country work. 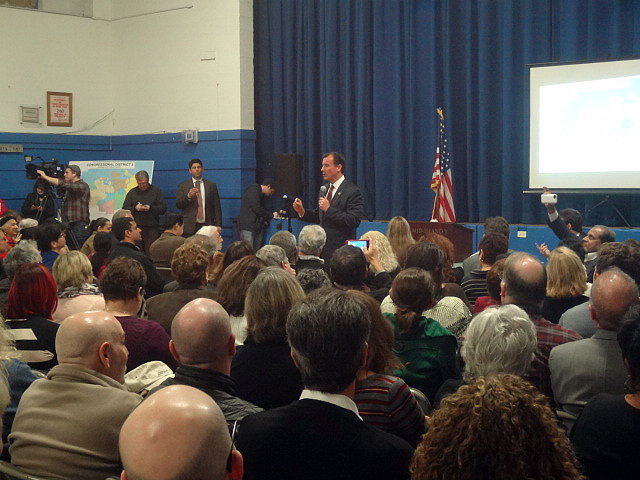 “Thank you so much for being here…as a candidate for the U.S. Congress, I held 25 town hall meetings, but they were never attended like this one,” he said. “This, to me, is so inspiring because this is what our country is all about. Out of everything that's going on in this country, the blessing is that so many people are actively engaged and this country needs this kind of engagement.” 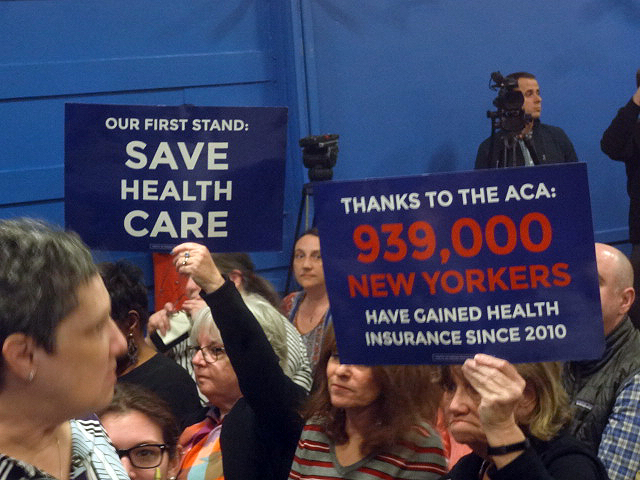 Suozzi: “This, to me, is so inspiring because this is what our country is all about...the blessing is that so many people are actively engaged and this country needs this kind of engagement.” Photo Credit: Chris Boyle

Suozzi said that the main rule for his town hall meeting was that everyone had to be respectful towards everyone's comments and concerns; despite the heavy democratic leanings of the audience, Suozzi invited any Trump supporters present to speak and be heard as well, although none took him up on his offer. 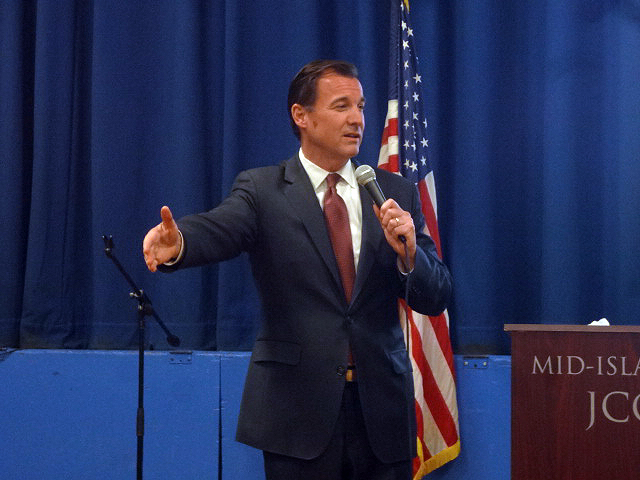 “There are five major issues that have been coming to me the most,” Suozzi said, outlining the rules for the evening’s public discussion and Q&A session. “I'm going to speak about those five issues, and we're going to go through each subject, and whoever wants to talk about those subjects, we'll talk about them one at a time and then move on to the next.”

“The first subject people bring up to me over and over is saving the Affordable Care Act,” Suozzi continued. “I recently held a rally with Congresswoman Kathleen Rice, and we had about 1,500 people attend. I had people getting up telling very personal stories about how the repeal of the Affordable Care Act would affect them personally. It really is a matter of life and death for a lot of families in America.” 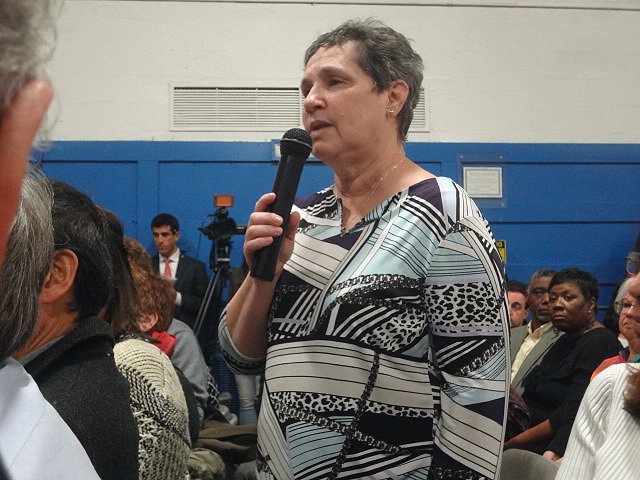 Suozzi noted that there are 20 million people who currently receive health insurance that didn't receive it before, as well as another group of people who have pre-existing medical conditions who may have had health insurance previously, but under the old law would be denied coverage if they moved to another job. Suozzi also stated that the country needs laws that allow parents to cover their adult children and that protect women from being charged more for medical services based solely on their gender. 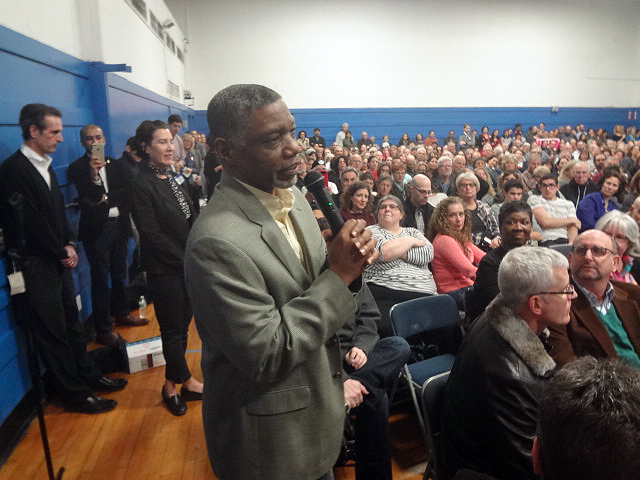 Oceanside resident Gary Kay, a member of the audience, relayed the troubles he and his family have experienced with the Affordable Care Act – otherwise known as “Obamacare” – but also expressed fear that, if replaced, its successor may be even worse.

“My wife has had colon cancer since 2015, and she’s living proof of dealing with Obamacare,” he said. “We went to the best cancer hospital in the city, and we've been dealing with this Affordable Care Act for the past two years and it needs to be changed. We keep dealing with insurance companies that are folding up or leaving New York, and eventually we had so much trouble with Obamacare that my wife had to leave the hospital. There's a lot wrong with this system, but I'm also concerned about whatever bill may be passed to replace Obamacare and whether or not it will take my wife's pre-existing condition into account.” 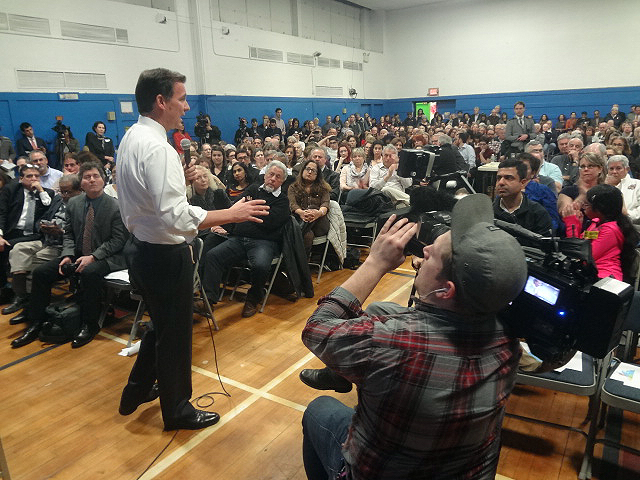 Suozzi said that the main rule for his town hall meeting was that everyone had to be respectful towards everyone's comments and concerns. Photo Credit: Chris Boyle

“I don’t think the Affordable Care Act is problem-free by any stretch,” Suozzi replied. “However, I advocate a ‘mend it, don't end’ it approach as opposed to doing away with it all together. We need to fix things, not repeal and replace.”

Another issue Suozzi spoke on was has to do with the alleged “unusual relationship” between the President of the United States Donald Trump and his Russian counterpart Vladimir Putin.

“It seems to be some very unusual events going on,” he said. “From the Russian hacking of the presidential election, which we know for a fact happened, to the president refusing to divest himself of his interests and place his assets into a Blind Trust.” 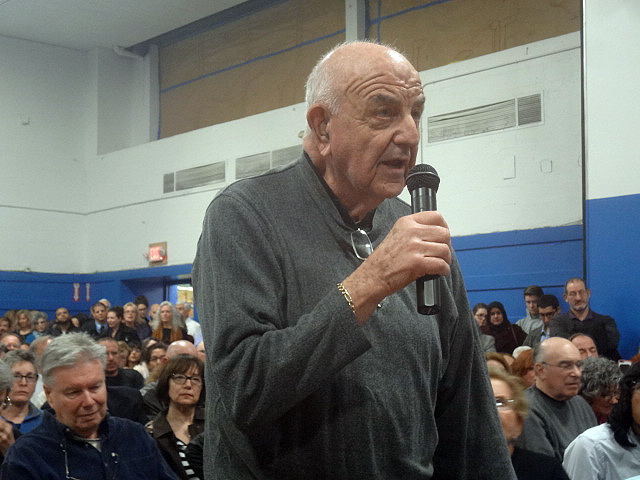 The passion of the public was very much on display at Congressman Tom Suozzi's town hall meeting. Photo Credit: Chris Boyle

In an exchange with an audience member, Suozzi talked about a Republican senator attempting to get a subpoena for President Trump to make his tax records public, stating that the country would know once and for all if he had any financial ties to or conflicts of interest with Russia. However, current laws do not require a President to either place their financial assets into Blind Trusts, nor do they require the public release of tax records.

Suozzi also spoke about the President’s controversial travel ban, which targets seven Muslim-majority countries in the Middle East – a plan Suozzi called “discriminatory” – as well as new Federal immigration and deportation measures. Suozzi also spent time that evening talking about the environment and concerns that he and some attendees of the town hall meeting had about the Trump Administration's commitment to protecting it from harm.

While Suozzi and his audience appeared to be mostly on the same page for the vast majority of the evening, at one point an argument broke out between the congressman and some of his constituents regarding his unwillingness to talk about who should be the new Democratic National Convention chair; the closest Suozzi would come to expressing an opinion on the subject was that he was opposed to Minnesota Congressman Keith Ellison serving in that position. Otherwise, Suozzi essentially dodged questions on the subject, leading to a heated exchange at one point with some audience members. 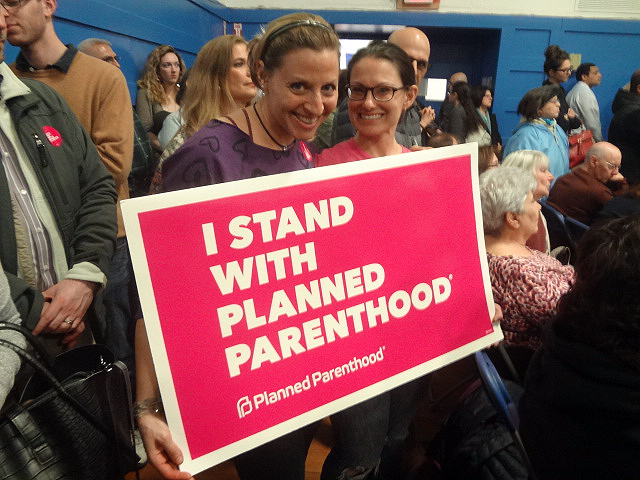 The passion of the public was very much on display at Congressman Tom Suozzi's town hall meeting. Photo Credit: Chris Boyle

Overall, however, Suozzi said that he appreciated the steadfast commitment of those who attended the town hall meeting to making their country a better place, and urged everyone to keep up the work and not let their passion be rudderless; establish goals and pursue them, he said, and keep the free-flowing exchange of information and ideas flowing in order to make this country the best it can be.

“What's so important is that we have to organize...we have to take this energy and use it in an organized direction to address concerns like the pre-existing condition clause and healthcare,” he said. “And the best thing you can do is to stay active, especially with your local media. Write your local newspapers, your local websites, use Facebook, attend town hall meetings and rallies, get information out there and make your voice heard. That's what America is all about, each and every one of us having a voice to make change, no matter which side of the political fence you’re on.”