Long Island Fight for Charity Presents Over $160,000 in Donations to Local Charities 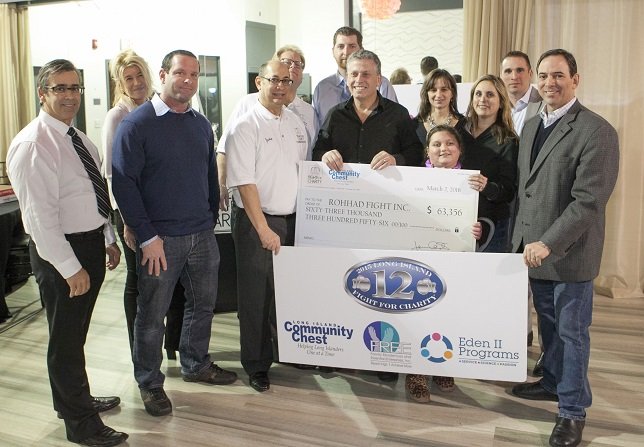 Hauppauge, NY - February 22, 2016 - Long Island Fight for Charity, one of Long Island’s most popular and most unique charity fund raising and networking organizations, recently held a Boxer Appreciation and Charity Donation Presentation at SimPlay in Hauppauge to give check donations amounting to over $160,000 to representatives of several Long Island-based charities.

Long Island Fight for Charity Co-Founder and Chairman Jamie Austin presented the donation checks to board members of Long Island Community Chest, $60,000; the National Foundation for Human Potential, $20,000; Genesis School, $20,000; ROHHAD Fight Inc., $63,356 and Captain Kathy Mazza/Lodge 2163A, $2,210. The funds were raised in 2015 by the Long Island Fight for Charity through its year-long series of events, particularly its 12th Main Event in November when over 20 businesspeople donned boxing gloves and met each other in the boxing ring at the Hilton-Long Island. Fight for Charity’s Main Event drew a record crowd of over 1,000 fans, alumni boxers and representatives of corporate and restaurant sponsors and committee members and volunteers to make it one of the organization’s most successful fund raisers since 2003. To date, over 275 men and women have earned the title of LI-FFC Alumni Boxer.

“The presentation of donation checks to the five Long Island charities is a culmination of the commitment and effort put forth by our 2015 volunteer boxers and all the people involved in making the LIFFC mission succeed. Our 12th Main Event was exciting and successful due to the kindness of the sponsors and the many volunteers who participated, especially our boxers. I hope these selfless individuals will serve as an example to other businesspeople as we call for volunteers for the 2016 line-up of boxers,” said Jamie Austin, Chair of LIFFC and Director of Online Business Solutions at Protravel International.

Fight for Charity Boxers are business professionals who believe in “giving back” to the community in a meaningful way. The men and women volunteers went into serious training at five participating gyms to prepare to go toe-to-toe with their opponents at the Main Event. There were a series of events held leading up to the Main Event, which featured a boxing card with 13 bouts, networking opportunities, exciting ringside fun and plenty of food and beverages provided by local restaurants.