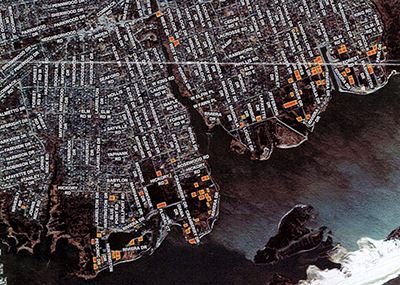 Wetlands near rivers and streams along the Great South Bay-home to a variety of birds, waterfowl, fish and other aquatic-based animals-will now be protected by Brookhaven Town. The town unanimously voted to purchase 106 parcels of land in the Mastic Beach Conservation Area, some of which still contain structures that were destroyed when SuperStorm Sandy battered the area in 2012.

The land is important to the environmental health of the region because it contains wildlife that contributes to the health of the local environment. The parcels are not contiguous but are spread out around the area. (See photograph above where the properties are indicated with orange and yellow boxes.)

In a statement announcing the resolution the town explained that the acquisitions will protect low-lying coastal areas that are prone to flood during extreme high tides, storms and hurricanes.

Any structures that remain on any of the properties after acquisition will be demolished and the land will be returned to its natural state as open space, the Town explained.

“When SuperStorm Sandy hit, it became very clear that we needed to do something to save the wetlands before it was too late,” said Town Councilman Dan Panico who sponsored the resolution.

He said that the town has already demolished abandoned houses and returned those properties to their natural state.

“But we need to do more,“ said Panico. “Our land acquisitions, and those recently approved by the County, will help keep future flooding and storm damage down to a minimum during the next severe weather event or hurricane that bears down on the peninsula.”

“The entire south shore of Brookhaven is vulnerable to flooding and one of the prime reasons is overdevelopment of the wetlands from Blue Point to East Moriches,” said Town Supervisor Ed Romaine in a statement. “Over the years, I have witnessed first-hand the damage and devastation in the wake of many hurricanes and storms.”