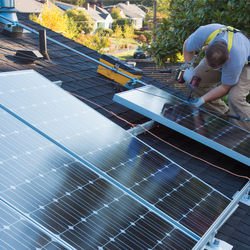 “New York is a national leader in clean energy, and the tremendous growth of the solar industry across this state demonstrates this renewal technology’s increased accessibility and affordability for residents and businesses," Governor Cuomo said. "Our investments in this clean energy resource create jobs, reduce carbon emissions, support economic growth, and help build a cleaner, greener New York for all."

The 795 percent solar growth in the State over the last five years was supported by the New York State Energy Research and Development Authority, the New York Power Authority, the Long Island Power Authority and other private and public sector actors. 64,926 projects were installed through the end of 2016, compared with 9,079 through the end of 2011. These state-supported projects total nearly 744 megawatts of solar power installed. That amount of electricity would be sufficient to meet the needs of more than 121,000 average homes.

The significant growth of solar power is attributed to a combination of factors, including the NY-Sun Megawatt Block Incentive program, a decline in solar equipment prices, and growth in the number of installer businesses marketing solar directly to consumers.

The largest percentage increase in solar power was in the Mohawk Valley, followed by the Finger Lakes Region, Central New York and the Southern Tier. Long Island has more installations than any other region of the State, followed by the Mid-Hudson Valley and Capital Region.

The following table highlights the significant expansion of solar power under NY-Sun in each region of the State from the end of 2011 through the end of 2016:

With a total of more than 38,000 solar projects, including the more than 28,000 installed over the last five years, Long Island is the first New York region to meet the State’s megawatt block target for the residential market, underscoring the effectiveness and success of NY-Sun and the other Long Island utility programs. The momentum across Long Island is expected to continue because of federal and state tax credits, affordable financing for underserved communities, and an established market of solar developers.

In addition to the new solar installations over the last five years, more than 886 MW of additional solar power was under development in the State as of the end of last year, enough to power more than 150,000 average homes.

In 2014, Governor Cuomo made a historic commitment of nearly $1 billion to NY-Sun to stimulate the marketplace and increase the number of solar electric systems across the State over 10 years. NY-Sun aims to add more than three gigawatts of installed solar capacity in the State by 2023. One gigawatt equals 1,000 megawatts. New York now has more than 8,000 workers engaged in solar jobs.

Maps showing megawatts of solar for counties in each New York region and a chart illustrating pre-NY-Sun versus post-NY-Sun figures can be found here.

John B. Rhodes, President and CEO of NYSERDA said, "The surge in the solar market is providing energy savings for New York households and businesses, and creating thousands of jobs as the industry grows to meet this demand. NY-Sun demonstrates Governor Cuomo's clean energy strategy in action."

Gil C. Quiniones, President and CEO of the New York Power Authority said, “This latest data on the exponential growth of solar power in New York State reflects the dedicated efforts under Governor Cuomo’s leadership to advance the use of this clean energy technology and further drive down its costs. In partnership with solar power manufacturers, installers, schools, and others in the industry, we are adding new solar power sources and systems virtually every day.”

Michael Voltz, Director of Energy Efficiency and Renewables at PSEG Long Island said, “PSEG Long Island is committed to supporting the clean renewable energy industry on Long Island and in the Rockaways. Achieving a milestone of this magnitude is due in large part to providing our customers with an alternative option for meeting their energy needs and partnering with Governor Cuomo’s NY-Sun Initiative to continue to grow the industry and create jobs, while helping the environment.”

Scott Maskin, Co-founder and CEO of SUNation, a Long Island solar installer said, "SUNation Solar Systems applauds the consistent and reliable support of Governor Cuomo's solar programs. The value of each solar panel installed goes far beyond just the value of its clean energy produced. Every panel installed also represents highly skilled jobs for our Island and revenue retained for our local economy. Solar on Long Island finally has unstoppable traction due to a strong advocate for renewable energy in Governor Cuomo."

Joe Sliker, President & CEO of Renovus Solar, an Ithaca solar installer said, “We are lucky to have a strong climate for building the renewable energy future in New York State. Thanks to Governor Cuomo’s bold REV strategy, Renovus Solar has begun developing community solar, creating access to affordable, clean, locally-generated solar power to everyone, including low and moderate income families. Solar development has become a vital economic driver in the State, as we create good, living-wage jobs while offering huge savings to our customers, all the while ensuring a sustainable planet.”

Evan Dube, Senior Director of Public Policy of Sunrun, which has installed solar panels in various New York regions, said, "Rooftop solar is a sustainable and economically efficient solution for the grid of the future and will bring more local jobs and cleaner air to New York. We look forward to continuing to expand consumer choices and access to rooftop solar for New Yorkers.”

Stan Dobert, Owner of Apex Solar of Warren County said, “This solar growth has directly impacted our many offices throughout the region as our number of employees has grown to more than 110 and we continue to hire new employees at all levels, from installers to IT. Thanks to the support of the NY-Sun Initiative, New Yorkers going solar have driven high-paying jobs to our company. We look forward to continuing to expand our business as solar becomes more affordable and accessible.”

About Reforming the Energy Vision
Reforming the Energy Vision is Governor Andrew M. Cuomo's strategy to lead on climate change and grow New York's economy. REV is building a cleaner, more resilient and affordable energy system for all New Yorkers by stimulating investment in clean technologies like solar, wind, and energy efficiency and generating 50 percent of the state's electricity needs from renewable energy by 2030. Already, REV has driven 795 percent growth in the statewide solar market, enabled over 105,000 low-income households to permanently cut their energy bills with energy efficiency, and created thousands of jobs in manufacturing, engineering, and other clean-tech sectors. REV is ensuring New York State reduces statewide greenhouse gas emissions 40 percent by 2030 and achieves the internationally-recognized target of reducing emissions 80 percent by 2050. To learn more about REV, including the Governor's $5 billion investment in clean energy technology and innovation, please visit www.ny.gov/REV4NY and follow us at @Rev4NY.