Nick Canon will "takeover" as principal for a day at the school that donates the most food. 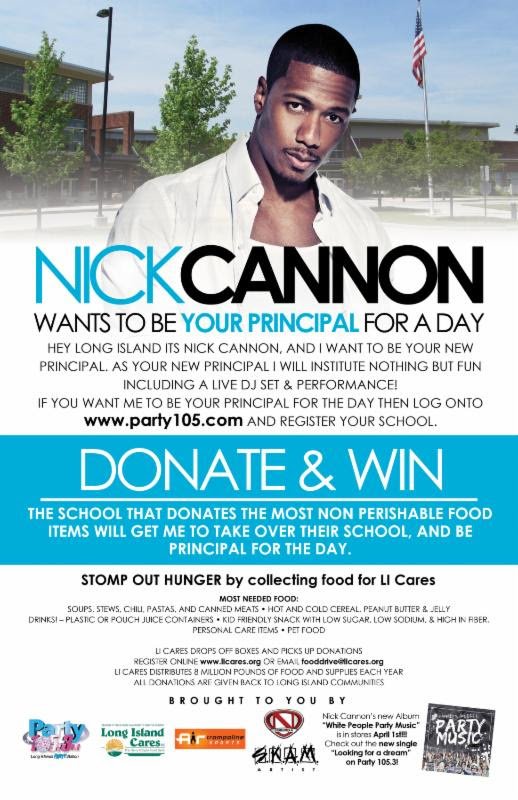 Hauppauge, NY - February 21, 2014 - ATTENTION ALL SUFFOLK COUNTY SCHOOLS: PARTY 105FM Radio has partnered with NICK CANNON (host of America's Got Talent) to bring you the ULTIMATE SCHOOL TAKEOVER TO FEED THE HUNGRY on Long Island! REGISTER HERE for the chance to have Nick Cannon  "takeover" your school as Principal on April 11, 2014! How do you win? Be the lucky school to collect the most pounds of donations for Long Island Cares.
Eligibility Requirements and Rules
About Long Island Cares, Inc.
Long Island Cares, Inc. - The Harry Chapin Food Bank is Long Island's first food bank: serving the hungry on Long Island since, 1980.  Long Island Cares brings together all available resources for the benefit of the hungry on Long Island and provides emergency food where and when it is needed, and sponsors a wide variety of innovate direct service programs that help families achieve self-sufficiency. The organization was founded by the late singer, Grammy Award winning songwriter and social activist Harry Chapin in response to the growing issue of hunger on Long Island. It is continued today by his wife and partner Sandy Chapin, a dedicated Board of Directors and talented staff working out of their 35,000 square foot facility in Hauppauge and their storefront hunger assistance centers in Freeport and Lindenhurst. Long Island Cares is a member agency of the Food Bank Association of New York State and Feeding America. Long Island Cares, Inc. is recognized by the NYS Department of Health and the USDA as the regional food bank for Long Island.