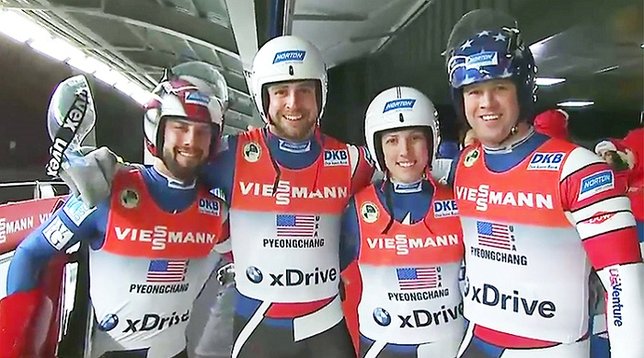 Pyeongchang, South Korea - February 19, 2017 - USA Luge finished fourth in Sunday’s Viessmann Team Relay World Cup, presented by BMW, and is one of five teams in contention for overall silver and bronze medals when the tour reconvenes next weekend for the finals in Altenberg, Germany.

Germany won its third race in five starts and clinched the World Cup season-long race to go along with their 2016-2017 women’s and doubles titles. But thereafter, the United States is in a battle with Austria (second place Sunday), Latvia (third place), Russia (fifth) and Canada (sixth). The five nations are separated by only five points in the standings.

The Americans are four points from second place on the strength of silver and bronze medals and a pair of fourth place efforts this winter.

This situation presented itself about two hours after the men’s singles race that saw Chris Mazdzer lead all USA Luge athletes with a 12th place performance.

Singles racers Erin Hamlin and Mazdzer, and the doubles team of Matt Mortensen and Jayson Terdiman, with seven Olympics between them, put the U.S. relay team in the mix for next Sunday’s dramatics.

Hamlin, the Olympic bronze medalist and four-time World Championship medal winner, got the team off on solid footing with an eventual third place run that saw her slide cleanly through critical curve nine.

“I had gotten curve nine pretty solid a few times in training so I knew the potential was there, which I'm sure most people can say,” remarked Hamlin. “It's just a matter of making it work when it counts.”

She made it count in the team relay, despite being delayed at the start with no green light or start clock. Hamlin had already exchanged good luck wishes with her teammates, and then just sat there. Viewers on the live stream saw her humorous reaction.

“It was just kind of amusing,” said the Remsen, N.Y. racer. “Gotta stay light hearted, you know? Keep it fun….I'm not sure I can attribute my run to that. If anything, I was iced a little at the handles.”

Mazdzer, of Saranac Lake, N.Y., followed with the leading reaction time of the men’s field, while Mortensen, of Huntington Station, N.Y., and Terdiman, of Berwick, Pa., improved the result to third place with three sleds remaining.

Neither Russia nor Canada, following the Americans, could slip ahead, putting a U.S. medal in the hands of Germany. Despite the ever-present specter of curve nine, Natalie Geisenberger, Andi Langenhan, Toni Eggert and Sascha Benecken did not comply, winning the race in a time of 2 minutes, 29.119 seconds.

“From the two weeks of training here we learned that no lead is safe,” said Terdiman. “You can have a near perfect run, but if your (curve) nine to 12 combination is not perfect, you can bet on being behind. That being said, I think the track is lots of fun, and very exciting as people could see in the races this weekend. I'm looking forward to coming back here to try and master the track.”

The unpredictability of events on the new 2018 course at the Alpensia Sliding Centre, created predominantly by curve nine, started before one sled hit the ice, as it was announced that Germany’s Felix Loch, the 2010 and 2014 Olympic champion, was scratched due to a bout of the flu and accompanying aches and pains.

The defending World Cup overall champion is in third place on the season, and mathematically, remains alive for this year’s title. However, he’ll need Russians Roman Repilov and Semen Pavlichenko to cooperate next week in Altenberg.

The top two in the World Cup rankings were absent, too, in a manner of speaking, as the Alpensia track won those personal battles. Pavlichenko, 2015 World Champion, was 14th. He has won twice with two silver medals to date. Repilov, the breakout star of this season, was 28th. He had two World Cup gold medals and four silvers prior to Pyeongchang.

Recent two-time World Champion Wolfgang Kindl, of Austria, was 10th Sunday and is fourth on the World Cup campaign.

The top three in the men’s race were all proven entities. Italian Dominik Fischnaller celebrated his 24th birthday one day early, winning for the fourth time in his young career. He was followed by silver medalist Langenhan and Sam Edney of Canada in third place.

All three proved, throughout the two weeks of sliding here, to have a grasp of the intricacies of curve nine, the ensuing uphill section that creates negative G-forces and the uphill final curve.

Fischnaller posted the two fastest runs of the race, totaling 1:37.229, turning back Langenhan’s 1:37.378. Edney, who came back this season after taking time out last year to continue his education, illustrated the vagaries of the world’s newest track. The Calgarian’s individual runs were sixth and seventh fastest, respectively, yet he was issued the bronze medal.

Germany’s Johannes Ludwig was second at the mid-point before dropping to sixth place, and Latvians Kristers Aparjods and Arturs Darznieks were fourth and fifth at the intermission, respectively, before surrendering time in the final leg.

On the season, West is seventh in the World Cup standings, with Mazdzer 11th, Morris 16th and Gustafson 30th in his rookie season.

When the day’s agenda had concluded, it was time to pack gear and clothing for the flight to Frankfurt and the start of training Tuesday in Altenberg. But that didn’t mean Pyeongchang was out of everyone’s mind. It’s just in their rear-view mirrors.

“We, unfortunately, were very preoccupied with (curve) nine, so I didn't get much testing down, which I had hoped to do,” said Hamlin. “But after the two weeks I learned that nine is tough, has zero room for error and I'm a fan of Korea.

“As a whole, the track is fun. It's nice to have a challenge, even though it got a bit frustrating, mainly because I got it great a few times so I just needed to duplicate it. Hopefully, more runs can help us out. We'll see what it's like next year. I know a lot of things will depend on how bobsled and skeleton fare next month.”

The World Cup tour will return to this Olympic site in the fall for another week of riddle-solving. Then, in less than 12 months, the excitement will resume in earnest when Olympians arrive with six runs to solve the conundrum known as curve nine, termed “Dice Roll” by the USA’s Anthony Espinoza.

However, to Hamlin’s point, based on feedback from the bobsled and skeleton teams in March, some curve profiles could be altered. Either way, as Terdiman aptly previewed, “One thing is for sure - the Olympic Games will be thrilling to watch next February.”