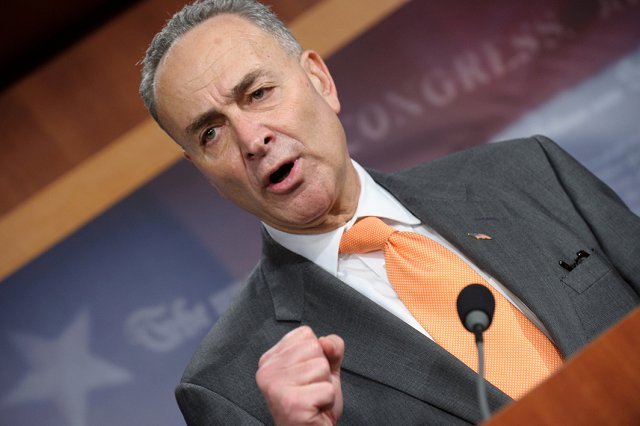 Long Island, NY - February 19th, 2016 - U. S. Senator Charles E. Schumer, today, revealed new details about an Internal Revenue Service (IRS) impersonation scam hitting LI seniors hard. The Senator reveled recordings obtained by his office that show specific, unsavory tactics employed by the scammers who have been calling LI residents. Schumer talked about the uptick in complaints to his LI office and says that in some instances the scammers are directing LI residents, “to the closest Walmart,” to immediately complete a fraudulent money transfer, purportedly to the IRS.

"This IRS impersonation scam continues to spread like wild fire and it’s looking to burn our seniors on Long Island,” said Schumer. “Scammers are unfortunately using Walmart as an unwitting go-to store when carrying out these fraudulent transactions and that’s why I’m urging Walmart to do everything it can to warn customers of this IRS impersonation scam so that it can be avoided. The scammers who perpetrate this hoax lie to vulnerable people, browbeat and intimidate them, dupe them into wiring them money and steal their hard-earned savings. If Walmart can play a role in helping to prevent any more from falling victim to this scam, they should do so.”

Schumer, today, asked Walmart to instruct its employees staffing or helping to process money transfers to warn customers of the IRS scam, and to install signage, warning of the scam, in LI Walmart stores. This scam—which has cost victims about $30 million nationally—continues to plague many, including seniors on Long Island. On the scam calls, individuals posing as IRS agents claim that the person owes thousands of dollars to the IRS. Scammers threaten that if an amount is not paid right away the person on the other end of the call could soon be arrested or forced to appear in court, a tactic that seniors are often especially vulnerable to.

Schumer said that constituent stories and news reports from targets of the scam across the country indicate that Walmart  may be a go-to store used by the scammers. He said that Walmart should help warn customers before money transfers are made, while stressing the fact that they too are a victim here. The Senator also detailed requests he has made with the FBI and money transfer companies as a result of the scam’s  prevalence.

Schumer was joined by AARP of LI and LI residents who have received these calls.

Just last week, Schumer also called on the FBI to redouble its efforts in New York, given the recent uptick in constituent calls to his New York office. Residents called concerned by an increase in scam attempts against them. Earlier this month, New York State law enforcement and other officials warned of a “disturbing surge” in this specific IRS impersonation phishing scam.

Schumer says there could be an  escalation in scamming because of tax season and that is why the FBI should move fast to identify the source of the nefarious calling scam and shut down the operation, holding accountable the perpetrators, if possible. Schumer has also called on money transfer companies to better protect consumers by issuing a specific warning about this scam. Schumer says that federal action along with action by Walmart could better help eliminate this scam, which is the largest impersonation scam of its kind in U.S. history, according to Treasury Department investigators.

This IRS impersonation scam has been targeting people across the country, including many on Long Island. According to the IRS, thieves posing as IRS agents have been conning victims out of their own money. The scammers demand that the victim pay a phony bill worth thousands of dollars. Then the scammers threaten their victims by saying that if the money is not paid back immediately they will be arrested, have to show up in court, or be deported. The scammers urge their victims to send the money via wire transfer or prepaid debit card by going to their nearest Walmart.

Schumer played an audio recording of a scammer speaking to an individual about how to transfer the money using a person-to-person payment form at Walmart. Schumer also noted that,  often times, the scammers leave urgent callback requests on answering machines. The calls always appear to come from U.S. area codes, often times from the Washington D.C. area.

However, they are masked with a fake caller ID numbers and are  often coming from overseas. Schumer today said that if someone receives a similar threat, the IRS is urging people to hang up immediately and call  the Treasury Inspector General of Tax Administration (TIGTA) at 800-366-4484 to report the threat.

As of January, the Treasury Inspector General for Tax Administration (TIGTA) received approximately 896,000 scam reports since October 2013. Over 5,000 victims have collectively paid nearly $26.5 million dollars as a result of the scam. The Consumers Union has estimated that $350 million is lost by Americans to phone scams each year.

Schumer's office has received an increased number of calls from constituents who have received threatening phone calls from the IRS scammers.

The following is a transcript of a real message left to one of Schumer’s constituents:

"Hi. This message is intended to contact you. My name is Dennis Kwaid and I'm calling regarding an enforcement action executed by the U.S. Treasury and requires serious attention. Ignoring this will mean an intentional attempt to avoid judicial appearance before a magistrate judge or a grand jury or a federal or criminal offense. My number is 805-823-0402. I'd like you to cooperate with us and help us help you."