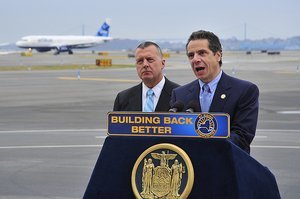 “Hurricane Sandy caused significant damage to LaGuardia Airport, but today we are taking an important step toward strengthening its infrastructure so that it is more resilient than ever before,” Governor Cuomo said. “To face the new pattern of extreme weather, we must ensure that vital transportation hubs and economic engines like LaGuardia Airport are ready for the next major storm. This is another example of how the State and our federal partners are building a safer and stronger New York.”

Various initiatives to protect the airfield runways, electrical systems and vital aeronautical equipment already have been implemented since the October 2012 storm. The new FEMA grant of $28,148,625 is an addition to FEMA’s previous award of $2,325,000 in grants for the program’s first phase, bringing the total federal outlay for the program to nearly $30.5 million.

Port Authority Director Pat Foye said, “We must do everything we can to ensure that LaGuardia is able to withstand extreme weather and resume flight operations as quickly as possible,” said Port Authority Executive Director Pat Foye. “We thank the Governor for his leadership in helping secure more than $30 million in federal funding to construct new floodwalls, drainage systems and improve electrical systems that will help keep LaGuardia open for business.”

Senator Charles E. Schumer said, “As a major New York City airport, it’s absolutely necessary that LaGuardia is equipped with the mitigation and resiliency measures needed to protect the airfield in the event of a future storm. I am pleased that over $30 million in federal hazard mitigation funding will help construct a floodwall, develop gravity drainage systems, upgrade the airport’s backup electrical substations, and improve and install backup generators throughout the airport. Investing in flood prevention measures at LaGuardia Airport is the smart thing to do so that Tri-state area flights are not halted for days in the aftermath of the next super storm.”

Senator Kirsten E. Gillibrand said, “La Guardia Airport is a critical hub for New Yorkers and our tourism economy, and this investment will help ensure that it can withstand the next storm,” said Senator Gillibrand. “As New York continues to rebuild from Superstorm Sandy, I will make sure that FEMA and our federal agencies are responsive and provide the resources our communities need.”

Congresswoman Nita M. Lowey said, “LaGuardia and other important transportation infrastructure must be able to weather future storms. This FEMA money will reduce the burden on New York taxpayers who bounced back incredibly following Sandy’s devastation. As Ranking Member of the House Appropriations Committee, I am proud to have led the fight to secure federal Sandy recovery aid, and I will continue to work with the Governor to ensure New York’s recovery and resiliency needs are met.”

Congresswoman Carolyn B. Maloney said, “Sandy showed us that we have a long way to go in shoring up our infrastructure so that it can withstand any disaster Mother Nature has in store. These upgrades to LaGuardia take us a big step forward, so that next time we’ll be better prepared.”

Congressman Joe Crowley said, “While we continue to help communities across New York recover from the devastating impact of Hurricane Sandy, it is equally as important to make much-needed investments in our infrastructure to ensure our city is prepared to face the challenges of any future storms. There is no question that one of those investments must include LaGuardia Airport, which serves tens of thousands of passengers a day and contributes greatly to our local economy. I thank the Governor for his help in securing this much-needed funding that will help ensure that LaGuardia not only survives a future storm, but can continue to thrive in its wake.”

Congresswoman Grace Meng said, "These critical funds are a huge boost to ensuring that LaGuardia is prepared for future storms and extreme weather conditions. I thank Governor Cuomo and FEMA for all their work, and I'm pleased to help announce these vital initiatives."

The projects, which have been approved by the Port Authority of New York and New Jersey’s Board of Commissioners are:

These projects are consistent with the recommendations highlighted in the NYS 2100 Commission Report convened by Governor Cuomo. The 2100 report specifically highlighted protection of critical airport infrastructure through flood control and electrical power system resiliency measures.

LaGuardia Airport is vital to the New York region, employing 10,000 people and contributing more than $13 billion in total economic activity to the region. Superstorm Sandy severely impacted LaGuardia, dumping more than 100 million gallons of water from Flushing Bay onto the airfield and closing the airport to flight operations for three days. An estimated 250,000 passengers were unable to take scheduled flights during the storm and its immediate aftermath.

In addition to the FEMA grants that cover up to 75 percent of planning, engineering and construction costs, the remaining expenses are expected to be reimbursed through allowable flight fee payments at LaGuardia. FEMA’s reimbursements of $30.5 million are based on $40.6 million in eligible costs for the Port Authority. Federal reimbursements are not applicable to an additional nearly $5 million the Port Authority has set aside for project contingency and other agency soft costs.

Construction contracts for these projects will be procured via publicly advertised/low bid processes.

Project work is expected to continue through the end of 2016, with a total economic impact estimated at 220 job-years, $13.1 million in wages and $66 million in economic activity.