Reassignment of Freeport detective to mayor’s bodyguard and jeopardizing public safety among many reasons for PBA support of Kennedy and his team. 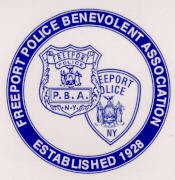 In the endorsement, Freeport PBA President Shawn Randall stated, “In the last four years, Freeport Mayor Hardwick has tried to dismantle the Freeport Police Department, and destroy over one hundred years of professionalism and service to the community for his own political gain. This year alone, he refused to hire five much needed officers, and reassigned a detective from the streets to be his personal bodyguard.”

“Freeport deserves safe streets and a mayor and board that will serve the residents and aid the police department in that effort. The current mayor has not done that, and continues to jeopardize public safety. The choice is clear and we proudly ask for your vote for Robert Kennedy and the whole Unity Home Rule Team,” concluded Mr. Randall.

“On behalf of my running mates, we recognize and appreciate the dedication and professionalism put forth by the men and women of the Freeport Police Department each and every day in keeping our community safe,” said Mr. Kennedy. “We are honored to receive their endorsement and pledge to continue supporting the outstanding work that they do.”

More information about Mr. Kennedy and the Unity Home Rule team of candidate can be found at www.unityhomeruleteam.com.