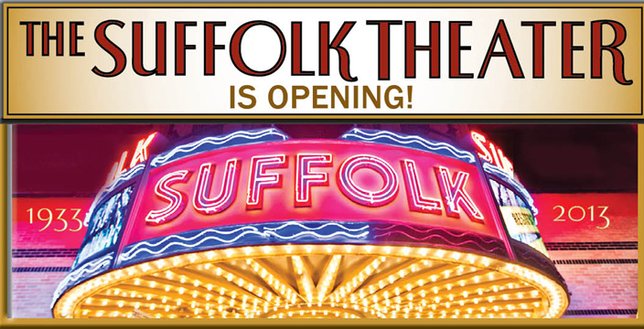 Riverhead, NY - February 18th, 2013 - The newly renovated Suffolk Theater will hold The Party of the Year with their Grand Opening Gala on Saturday, March 2nd, 2013. The “Back to the Thirties” cocktail party, featuring Grammy winning Vince Giordana and his Nighthawks Orchestra, will celebrate the gilded age of the era.

The art deco Suffolk Theater opened in December 1939, and was described as the most beautiful theater on Long Island. After many years of providing entertainment the theater was forced to close its doors in 1987, due to the shifting economy and the birth of the multiplex. Setting idle for the next 18 years, Bob and Dianne Castaldi purchased it in 2005 with the vision of creating a state of the arts performing arts center. After years of planning and negotiations, and the support of the local government, the town board and the community, the theater will breathe with life once again.

The theater has been meticulously restored and transformed into a flex space, state of the art, theatrical performance venue. Except for the replaced carpet, the interior of the theater is exactly as it was in 1933. The theater interior flourishing, woodland-motif murals and carvings, mosaic water fountain, woven wall coverings and crane-etched windows are all intact.
Tickets are $125.00 per person and available online at suffolktheater.com or by call the Box Office at 631-727-4343.
After Party Tickets are available for the hours of 9pm till midnight. $40 ticket includes dancing to New York’s DJ ALY.