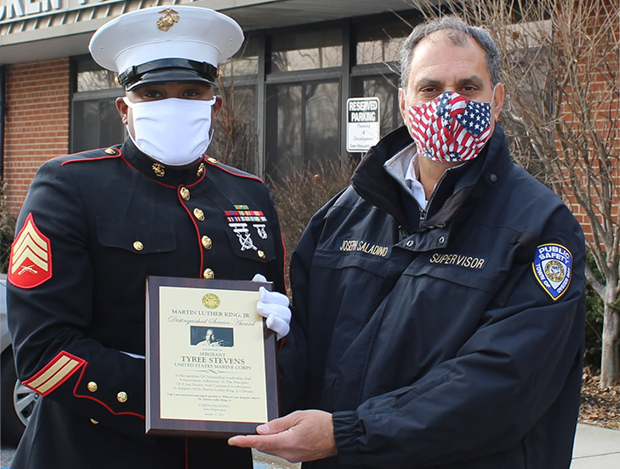 “Our diversity is our strength and this prestigious recognition reflects upon the incredible leadership and courage of Martin Luther King Jr., and also on the local contributions being made every day in our community by extraordinary people,” he added.

According to a press release from the Town, Sergeant Tyree Stevens enlisted in the Marine Corps Reserves in 2010 from the East Bronx Recruiting Station and attended recruit training in South Carolina. He was assigned to Marine Combat Training Battalion, Hotel Company, Camp Geiger, North Carolina, where he completed Marine Combat Training. After training camp, Private Stevens was assigned to Headquarters and Service Company, 2nd Battalion, 25th Marines, 4th Marine division in Garden City.

Over the years, Private Stevens earned the ranks of Private First Class, Lance Corporal, Corporal, and was finally promoted to the rank of Sergeant in 2016.

Throughout his service, his efforts have helped keep the lines of communication open between active and Reserve Marines. Throughout his military career, he became known for his willingness to volunteer for causes and endeavors that help others and advance the general welfare.

In April of 2017 Sergeant Stevens joined the Active Reserves program and volunteered to be the Battalion Color Sergeant overseeing and conducting Color Guards throughout the tri state region. As a Martial Arts instructor, he not only trained Marines but in his free time he conducted self-defense classes for military spouses as well as members of the community.

The Toys for Tots coordinator chose Sergeant Stevens as his assistant coordinator for the years 2019 and 2020. He has done 170 Color Guards, 256 Funeral Honors, 336 Toys for Tots events, and 75 community relation events. He recently received the Outstanding Volunteer service medal by his unit for all his off duty volunteer hours.

“The foundation for a healthy community is dependent upon the leadership of people like Sergeant Tyree Stevens,” said Saladino.