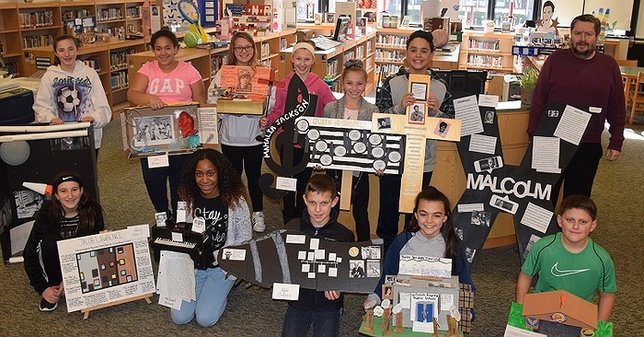 Mastic Beach, NY - February 16, 2017 - In an effort to emphasize the history and achievements of African Americans in the United States, students in Michael Beirne’s sixth-grade social studies classes at William Paca Middle School created projects to highlight African Americans who made their mark on history.

“The idea is to help open the students’ eyes to African Americans who have made significant achievements and contributions to our world,” said Mr. Beirne. “Students were encouraged to research historical figures rather than look at contemporary people and study the events and what they have gone through in comparison to where we are today.”

Some of the historical figures that students chose to highlight were Martin Luther King Jr., Jesse Owens, the Tuskegee Airmen, Ruby Bridges, Frederick Douglass, Sojourner Truth, Ray Charles, Mahalia Jackson, Jackie Robinson, Muhammad Ali and Wilt Chamberlain, along with some of the lesser known African Americans who have made a difference in the world including Dr. Daniel Hale Williams who performed the first successful open-heart surgery in America in 1893, Bessie Coleman who was the first African American woman (and first of Native American descent) to hold a pilot’s license and Guion “Guy” Bluford, a former NASA astronaut, aerospace engineer, retired U.S. Air Force officer and fighter pilot who became the first African American to travel into space in 1983.