Saturday night's snow caused delays last night at LaGuardia, including one Delta flight that was taxiing when it was hit by a de-icing vehicle, causing even further delays. More snow is on its way for ... 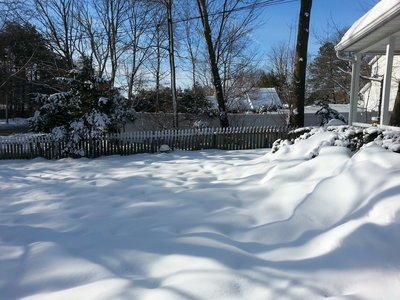 Long Islanders are facing a chilly Sunday morning after another round of snow came through last night, dropping 2-4 inches on most areas on the Island, though some parts of the East End were walloped with 7 inches of snow overnight.

The Saturday evening snowfall caused for icy road conditions, as well as limited visibility partly due to wind gusts ranging from 20 to 40 miles per hour.  The conditions proved to be especially dangerous last night at LaGuardia airport when a de-icing vehicle struck a Delta plane that was taxiing while waiting for the weather to clear.  According to ABC, there were 149 passengers on the plane which was bound for Orlando, none of whom were injured, and it has not been announced how much damage the vehicle did to the plane.  The passengers’ flight was delayed until Sunday morning.

Flurries are predicted for this afternoon into the evening, but they are not expected to accumulate.  According to the National Weather Service, Monday is expected to be cold but sunny with temperatures in the low 30s, and snowfall of less than an inch is expected for Monday night. Tuesday will bring a mix of rain and snow with new accumulation of 1 to 3 inches of snow possible.  The wintry mix is expected to hit before 3 p.m., then a chance of rain from 3 p.m. to 5 p.m., and a chance of rain and snow after 5 p.m.

As of Sunday morning, it appears that after Tuesday, Long Island should be in the clear, with temperatures even predicted to warm up to the mid-40s by the end of the week.

For the most up to date weather information, visit the LongIsland.com Weather Center, where you can find the latest weather forecasts, advisories, and more.